50 released after being held in DavOcc border 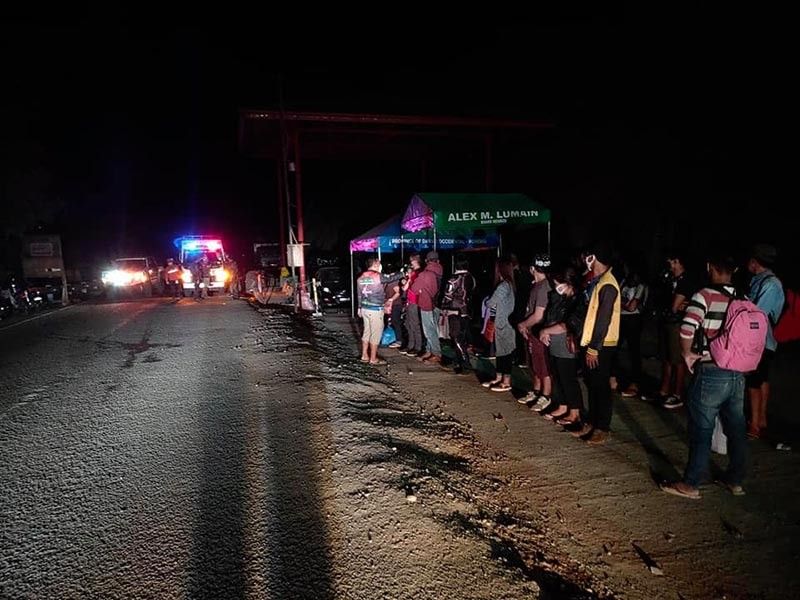 DAVAO. Several people coming outside of the Province of Davao Occidental stayed at the checkpoint for days during the implementation of the enhanced community quarantine in the province but were released after Covid-19 preventive measures were conducted on them. (Photo by Jun Jazz Jaso)

THE Provincial Government of Davao Occidental has finally released about 50 people after being held for days in Trucut in Sta. Maria, the border before entering the province.

Davao Occidental health education promotion officer Prince Paraiso said the people, mostly from Davao City, were already facilitated back to their respective municipalities on Saturday, April 4, and are considered persons under monitoring (PUM).

He said each village and municipality has set up their respective PUM facilities.

“They will be quarantined for 14 days so dili pa gyud sila makauli sa ilahang balay (they cannot go to their homes yet). They are profiled and the MSWDO (Municipal Social Welfare and Development Office) will take care of their food, and the RHU (Regional Health Unit) will also conduct check-ups,” he said.

The residents of Davao Occidental were reportedly stranded in Trucut after the Provincial Government implemented its Executive Order (EO) 26 or enhanced community quarantine (ECQ) on April 1, four days ahead of the ECQ declaration for the whole Davao Region.

He said the people were displaced workers from Davao City who were forced to stop their jobs due to the community quarantine in the city.

Since Davao City has already reported local transmission, he said the province intensified its measures against Covid-19.

Paraiso said the release was delayed because Davao Occidental Governor Claude Bautista has yet to come up with measures to ensure the people were not infected by the virus.

“Ang objective namo, we will protect our more than 300,000 constituents sa Davao Occidental. Sayang naman yung efforts namin if may makapasok (Our efforts will be futile if the virus makes its way here),” Paraiso said.

He added being a young province, they do not have enough health facilities to efficiently respond to the health crisis.

As of April 6, Davao Occidental has remained free from confirmed cases of Covid-19 based on the information from the Department of Health in Davao Region (DOH-Davao).

Paraiso said among the PUMs and PUIs, there are some who have travel history in New Davao Matina Gallera. They have already voluntarily submitted themselves for testing and monitoring.