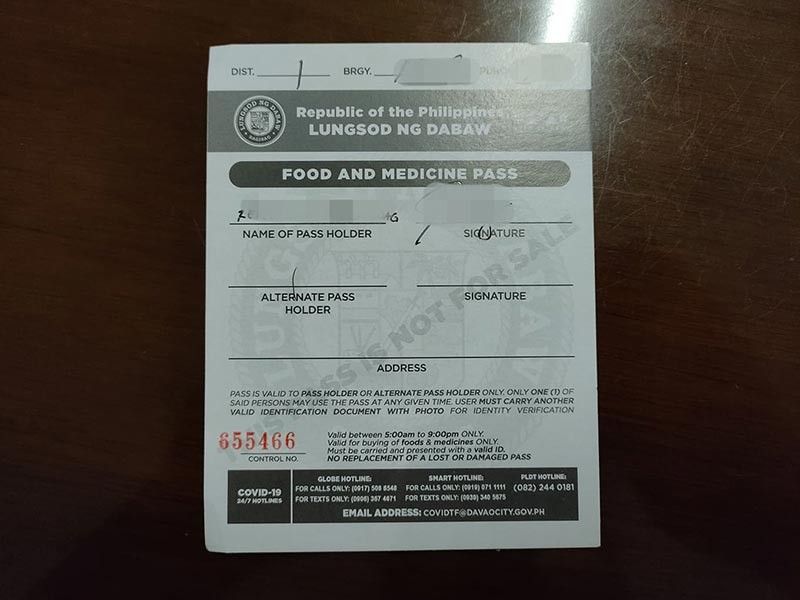 DAVAO City Mayor Sara Duterte-Carpio has ordered police to crack down on individuals who are replicating and selling food and medicine (FM) passes after receiving reports about it.

She said she already referred the report to the City Anti-Scam Unit (ASU) for the conduct of an entrapment operation.

According to the mayor, the fake FM passes can be easily identified as photocopied.

She added that legitimate passes are printed in thick cards, and not in ordinary papers.

ASU head Simplicio Sagarano told SunStar Davao in a phone interview on Wednesday, April 8, that a certain female complainant was referred to his office after the latter aired her complaint through the media regarding fake FM pass.

Upon calling the referred contact number, Sagarino said she cannot be reached.

Following the complaint, he said he immediately communicated with different police stations. But he said all of them reported that they did not receive a single complaint on a fake FM pass.

But Sagarino said they will continue monitoring for any complaints.

He also encouraged complainants to immediately report it to ASU or to the nearest operation for immediate action.

FM passes were distributed following the placement of the entire city under state of enhanced community quarantine (ECQ), following the rising cases of the coronavirus disease (Covid-19) in the city.

According to the EO, FM passes shall only be used to buy food, medicines or go to the hospital. Two individuals can be named on the pass but only one named person can use it at any given time. In case of emergency, the pass is not needed.

Meanwhile, the mayor said once the FM pass is lost, he or she must report it to the barangays to explain the loss of the pass.