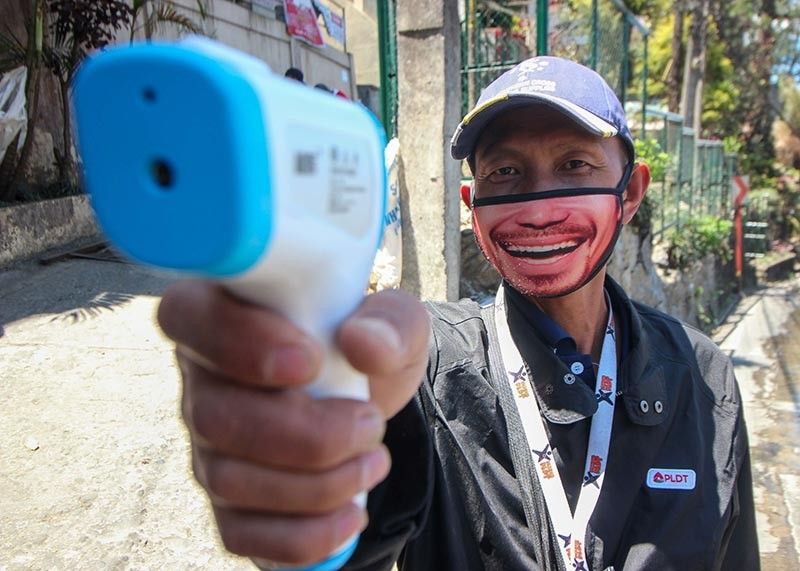 BAGUIO. Roderick Ballares, a member of the Integrated Barangay Peacekeeping Action Team (IBPAT) checks the temperature of residents before allowing them to enter the barangay hall. (Photo by Jean Nicole Cortes)

THE Quick Reaction Fund (QRF) of Baguio City is now nearing exhaustion after being utilized for immediate needs of the local government unit since the onset of the enhanced community quarantine (ECQ).

“As of March 31, our P30 million Quick Reaction Fund for the City is nearly exhausted, which is why we have requested the city council for an additional P150 million to be taken not from the sailings but from the reversion of unimplemented projects of the city as a refurbishment of our QRF,” Magalong said.

The P150-million supplemental fund will be used for the coming rainy season.

“We have to prepare for the rainy season and not only for CoViD-19. What is good as of the moment is that we have many donors of equipment which relieves the cost and expenses, aside from us being able to manage this when it comes to equipment, but our priority at this time is food,” the Chief executive stated.

In the first two weeks of implementation of the ECQ, the city spent an average of P5.2 million per week combined with a mass support from donors.

“Naturally there is a donor fatigue, and in this succeeding weeks, I think we are now spending around P10 million a week which is why I’ve said that I don’t really care if we are to spend P20 million a week for as long as everyone will receive which is why I have discussed this with the different Punong Barangays for them to use their common sense and objectivity and not think of politics and relationship because nothing will happen to us,” Magalong reiterated.

The P150 million fund will be used solely for operational expenses for Covid-19 which includes the acquisition of equipment especially essential items such as protective gear and food packages.