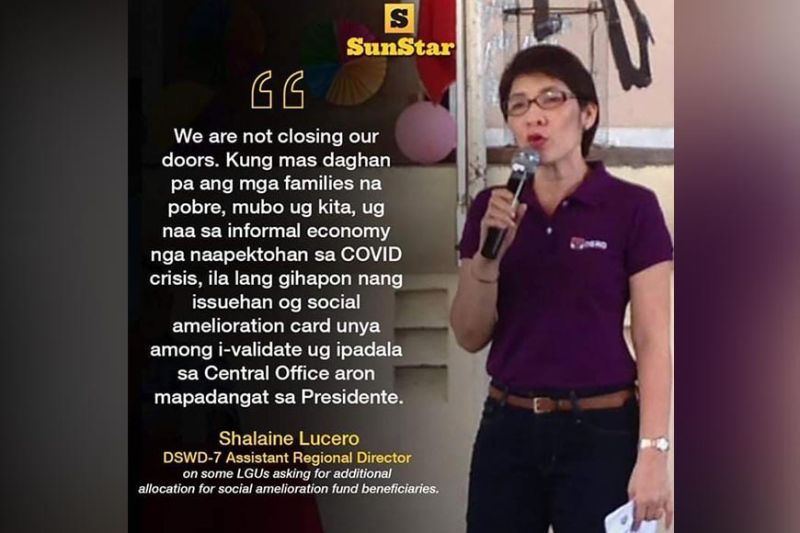 Labella was first told by the DSWD 7 that Cebu City has 262,000 SAP beneficiaries who would receive the P6,000 cash aid. However, he was later told that the actual number of beneficiaries were only 122,000.

The DSWD central office set aside P823 million for the 122,000 Cebu City residents qualified for SAP.

The social amelioration program under Republic Act 11469, or the Bayanihan to Heal as One Act, aims to mitigate the effects of Covid-19.

Labella said he was told that the DSWD 7 reduced the number of beneficiaries due to lack of funds.

The mayor hoped that at least 25 percent of Cebu City’s 1.1 million residents would receive the financial aid as there are several indigents in the city who still need the help.

Shalaine Lucero, assistant director for operations of the DSWD 7, said local government units (LGUs) must determine first the exact number of households under their jurisdiction that actually belong to the informal economy sector before they ask for additional allocation for SAP.

However, Lucero said the DSWD 7 will welcome an additional list of beneficiaries from the City. The DSWD 7 will validate the list and submit it to the central office for the final decision.

Lucero said the DSWD set the number of beneficiaries for each of the LGUs. The target allocation was based on the Philippine Statistics Authority (PSA) household census in 2015.

To account for the growth of the population in 2020, she said the PSA added 10 percent to the total number of households in 2015.

Of the 25.2 million households, the indicative or average measurement of how many families belong to the poor households or those who belong to the informal economy in the country was 73 percent. Thus, the DSWD central office determined 18 million poor households need assistance. The same figure was the basis of the Department of Finance to release P100 billion for SAP.

Aside from the national average, Lucero said the number of household allocation also varies depending on the class of the LGU.

In Cebu Province, the general average of poor household population is 69 percent; Bohol at 81 percent; Negros Oriental at 83 percent and Siquijor at 86 percent.

For Cebu City, the SAP budget allocation is for 149, 514 households. Of the said number, 10,032 households are member of the Pantawid Pamilya Pilipino Program (4Ps) and 16, 508 are Unconditional Cash Transfer (UCT)-Listahanan beneficiaries. The members of 4Ps and UCT-Listahanan are priority beneficiaries for the SAP.

Lucero said the remaining number would be determined by the Cebu City Government.

On Monday, April 13, the Cebu City Hall representatives and 80 barangay captains will meet with the DSWD 7 and Department of the Interior and Local Government officials to clarify the guidelines on SAP beneficiaries.

He assured that the distribution of the cash aid under SAP will commence after the guidelines are already clarified.

For Lucero, she could not believe that the local chief executives are having a hard time in identifying who among their constituents need the SAP cash aid the most.

She said the process would be easy if they identify who among the persons belonging to the informal economy sector that they must prioritize first.

Senior citizens or pregnant women is not allowed to get a cash aid if there are members of their households who have good-paying jobs.

In Talisay City, Mayor Gerald Anthony Gullas Jr. said he will offer his salary from April to November to the barangay personnel who are not SAP beneficiaries.

The barangay workers are excluded from the government's financial assistance so the poorest of the poor would get the help. (PAC, CBQ, WBS, JJL & JCT)