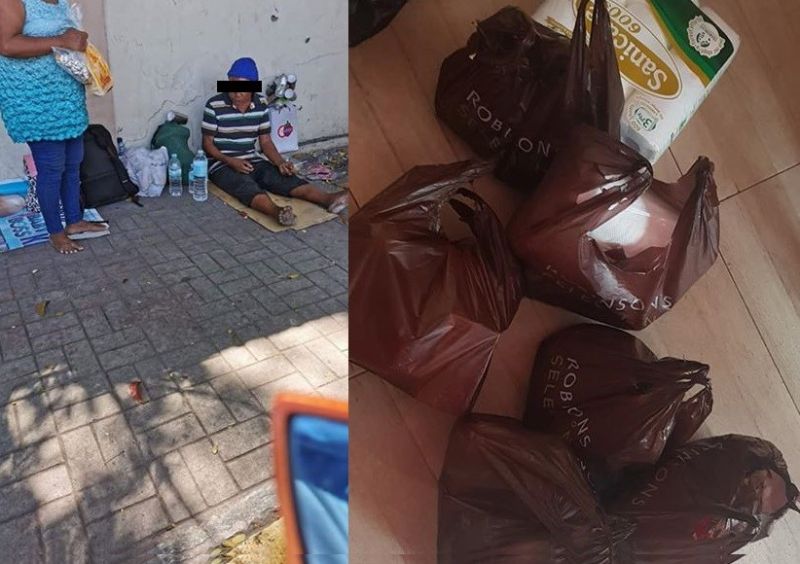 CEBU. After personally seeing the elderly and other women dragging heavy boxes of groceries, Roldan Daguil, 33, saw the need to help in the time of crisis. (Photos by Julie Ebol)

THE Covid-19 virus, which saw cities and towns under an enhanced community quarantine in Cebu, brought out the best in some people.

After personally seeing the elderly and other women dragging heavy boxes of groceries, Roldan Daguil, 33, saw the need to help in the time of crisis.

"During the start of the ECQ that called for social distancing among Cebuanos, I always go to the grocery. There, I saw people who were having a hard time bringing the items they brought, mostly mothers or senior citizens. It pains me to see them and I wanted to offer them a ride on my motorbike but it was not allowed," he said in Cebuano.

Daguil realized he could extend a helping hand to those who are vulnerable to the virus and who need to stay at home, especially those who do not have ECQ passes.

Together with his trusty motorbike, he started delivering groceries to households -- free of charge.

"I am offering to buy them their groceries, cash on delivery, with no service charge within Cebu City. The amount on the receipt will be the only amount they pay me," he told SunStar Cebu.

Touched by Daguil's act of kindness, Julie Ebol, who first saw his post in Let's Eat Bai -- an online community for food sellers and buyers, tried his services.

"The world around us is going crazy and here I am losing faith in humanity, but today I was reminded that good people still exist," she said.

She thanked Daguil for his sacrifices especially at a time where everyone is required to stay at home to help flatten the curve.

In his daily trips to supermarkets and grocery stores, Daguil also saw homeless people who barely had something to eat.

"I get tips from people who ask me to buy their groceries. Using the money, I would save it and later buy essential things like water and goods and give it to the homeless," he said.

When asked whether or not he was tired of lining up in grocery stores, Daguil said everything is worth the sacrifice when he sees those he served happy and safe.

Daguil, a former call center agent, is currently unemployed but is blessed with a loving family and an uncle who also supports his needs.