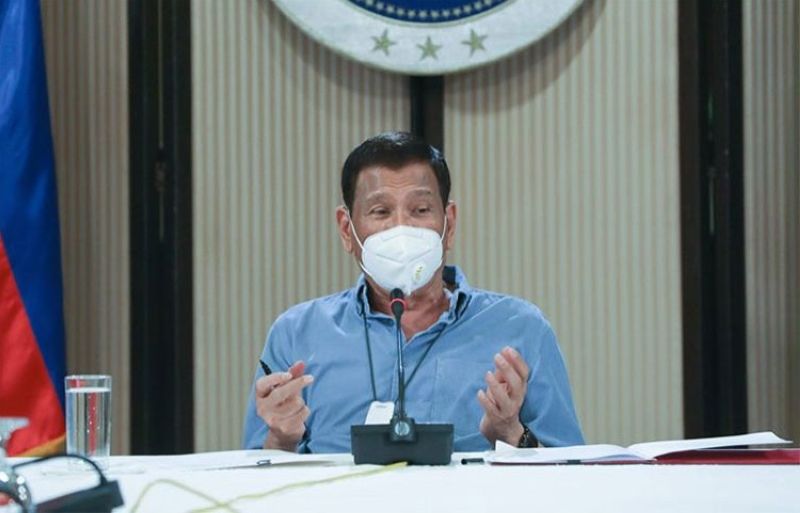 MANILA. President Rodrigo Duterte in a late-night address to the nation together with his key Cabinet members Wednesday, April 8, 2020. (Presidential Communications photo)

THE government is seeking additional loans of at least US$5.6 billion and considering sale of assets to raise funds for the battle against the coronavirus disease (Covid-19) and address the economic fallout.

In a late-night address to the nation together with his key Cabinet members, President Rodrigo Duterte said the estimated P300 billion that Congress allocated under the Bayanihan to Heal as One Act to address the impact of Covid-19 has yet to be collected.

(That is still up in the air. That money is not in our hands yet. We are still preparing the budget for next year. The budget that we are using now was prepared last year. But the Covid-19 outbreak was not taken into account then.)

Duterte said the P300 billion will be taken from future collections that would have been set aside as “buffer funds” for projects that cannot be completed under his administration.

He also said the intelligence funds allotted to the Office of the President have also yet to be collected.

But with the economy almost at a standstill because of the strict quarantine measures being imposed by the government, Duterte said revenue targets are not going to be met.

Finance Secretary Carlos Dominguez III said the government is negotiating with the Asian Development Bank and the World Bank for additional loans of US$5.6 billion.

“Kung kulang pa ito (If this is not enough), we will go to the commercial market,” he said.

Dominguez noted that the Philippines’ credit rating has improved to BBB+, which he said is the “highest ever” rating received by the country, and the country’s debt-to-GDP ratio has gone down to a low of 41 percent from 70 percent.

This year, however, he said debt-to-GDP ratio is projected to go up to 47 percent, which is still low compared to those of neighboring countries, he said.

“So we are confident ho na (that) we have the financial capability to bridge this problem that Covid has brought us,” he said even as he stressed the need to “spend it (the funds) correctly” since there isn’t going to be an endless source of funds.

Dominguez assured that the country is “very well prepared” to address the impact of the Covid-19 outbreak because the conservative economic policies of the Duterte administration had strengthened the economy.

Reiterating previous projections made by economists, the Finance chief the economy is expected to contract, with growth this year seen at zero or minus 1.0 percent.

“Covid-19 has hit us in a very hard way. Ang katotohanan lang ang estimate natin, (The truth is that we estimate) our GDP growth will be zero or minus 1 percent,” he said.

An estimated 1.2 million workers have been temporarily displaced while the budget deficit is seen to worsen to 5.3 percent of the gross domestic product (GDP) from the current 3.5 percent.

Dominguez said the economic team, including the Bangko Sentral ng Pilipinas, has put together a fiscal and monetary action plan worth P1.17 trillion, or 5.0 percent to 6.0 percent of the GDP.

Mostly, the amount will be used to provide subsidy to low-income families and workers of the small and medium enterprises as well as for the healthcare workers and other coronavirus-related expenses.

Meanwhile, Duterte said the government is willing to sell the Cultural Center of the Philippines (CCP) and the Philippine International Convention Center (PICC), if necessary.

Duterte assured transparency in the sale of government assets.