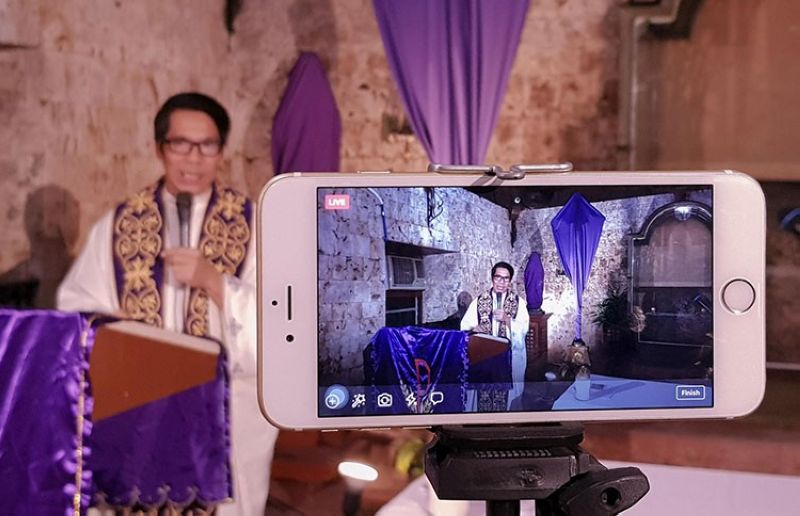 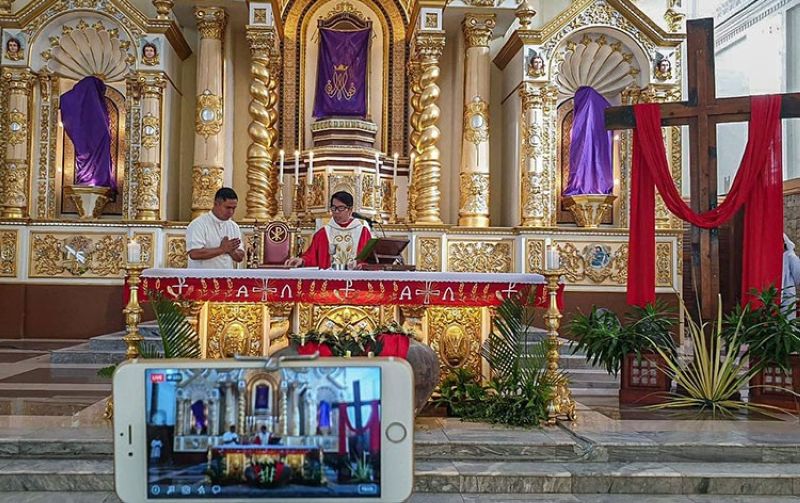 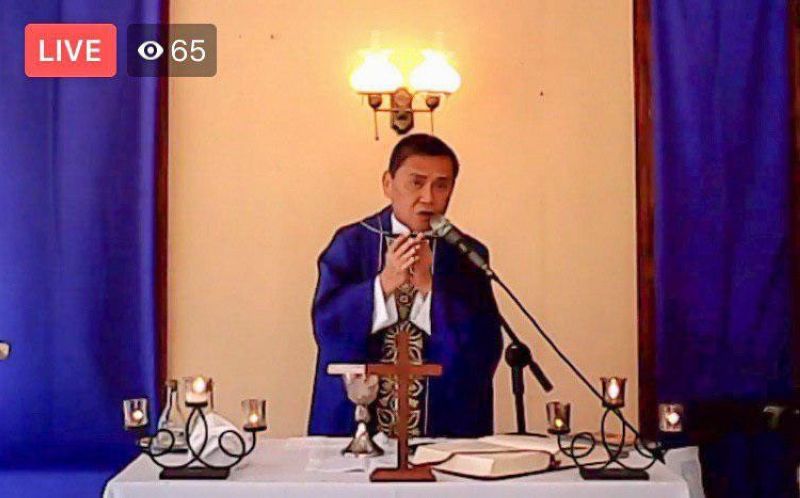 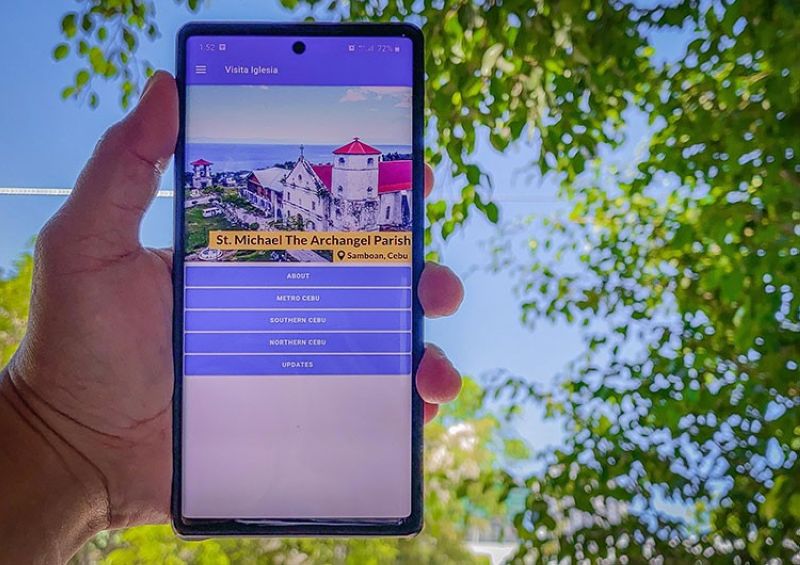 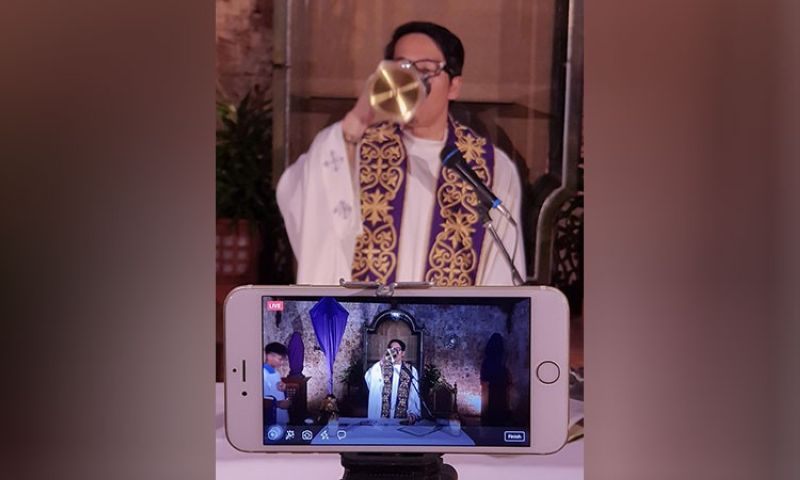 THE Covid-19 pandemic may have changed how the Filipino faithful are observing their Holy Week traditions this year, but it has not dampened their faith.

With the Enhanced Community Quarantine (ECQ) implemented nationwide, regular church activities such as public celebration of masses have been temporarily suspended. Thus, churches have turned to digital means to sustain the faith of their communities.

This includes broadcast of Holy Masses on TV and radio, as well as digital apps for those who would like to embark on their traditional Visita Iglesia, but are unable to do so given the current situation.

"Livestreaming of the Sacraments especially the celebration of the Mass introduces a new avenue in encountering God. Our encounter with God should not only be confined in sacred places. God is everywhere. You can celebrate your faith anywhere," says Fr. Joselito Danao, of the Archdiocesan Shrine of the Immaculate Heart of Mary in Minglanilla, Cebu.

Fr. Danao adds that in the past, Sunday Masses have been aired on TV and radio for sick and elderly parishioners who cannot attend the mass physically. “The Vatican encourages parishes to facilitate Masses via livestreaming. This is called Misa Sine Populo (mass in the absence of the worshipping congregation),” he added.

Amid the ECQ, Filipinos have turned to social media and the Internet to watch livestreams of Masses and holy rosaries and to join prayer groups.

Msgr. Julius Perpetuo S. Heruela, parish priest of the St. Augustine of Hippo Parish in Bacong, Negros Oriental and a member of the Diocesan Covid Task Force, says that there are already nine parishes in the Diocese of Dumaguete celebrating “virtual Masses.”

“Before, these Masses were just televised on national TV. Now, we can do it every day within the parish with our own parishioners with the help of technology and fast connectivity,” Msgr. Heruela added.

Livestreaming of Masses has also been a regular practice at the Basilica Minore del Sto. Niño de Cebu since November 2016.

“We started livestreaming our masses with only a camera and a laptop every Fridays and Sundays,” says Fr. Genesis Labana, director of the Basilica Minore del Sto. Niño de Cebu Media Center, the social communication office of the parish.

“After the suspension of masses in the Archdiocese of Cebu last March 18, the Basilica streams its masses daily in various platforms,” Fr. Labana adds.

“We are glad that many institutions have shown willingness to be an instrument of God in sharing the gospel,” he adds.

Aside from the efforts of bringing the word of God to devotees, Fr. Brian Brigoli, priest formator at the San Carlos Seminary College, says that the livestreaming of masses is also part of their initiatives to serve seminarians and their families during this time of global health crisis. Through technology and connectivity, seminarians and their families can attend virtual Mass together despite being physically apart.

'For where two or three gather in my name'

Since only a few VCF locations have been broadcasting worship services online, the congregation quickly organized a workshop on livestreaming for around 100 pastors and 50 staff members to ensure that they knew how to maximize technology so that members can still meet, pray, and worship together.

"By God's Grace, we had a measure of preparation before the ECQ and were able to train for it relatively quickly," says Pastor Manny Carlos, who is part of the multisite congregation’s Bishops Council.

For weeks now, VCF’s various sites around the Philippines have been broadcasting Sunday services, daily worship messages every morning, weekly praying and fasting, praise and worship music, and even youth and Kids Church activities all through social media. Everything is shot from the individual homes of the pastors and ministry volunteers using whatever equipment is available.

“The promise in Matthew 18:20 -- 'For where two or three gather in my name, there am I with them’ is also applicable to how we’re currently using technology to worship and pray together, and to be a source of hope amid a trying time,” the preacher explains.

Amid the suspension of religious activities for the Holy Week to mitigate the spread of Covid-19, devotees are unable to participate in several traditions. Among these is the Visita Iglesia, which involves visiting at least seven churches between Maundy Thursday and Good Friday.

However, thanks to an app by a Cebu-based tech startup, devotees may still continue their Visita Iglesia tradition online.

The Visita Iglesia app is made by InnoPub Media in partnership with Smart Communications Inc. and the Cebu Archdiocesan Commission for the Cultural Heritage of the Church.

“For Visita Iglesia 2020, while Cebu is on community quarantine as part of the efforts to contain the spread of the virus, we are featuring key historical churches to serve as virtual Visita Iglesia,” says Max Limpag, co-founder of InnoPub Media, who adds that the app is also part of on-going preparations for Smart’s Digital Tourism: Road to 2021 initiative, which commemorates the 500th anniversary of Christianity in the Philippines.

Information on how to install the Visita Iglesia app, as well as information on the different heritage churches are available at https://mycebu.ph/visita-iglesia/. (PR)