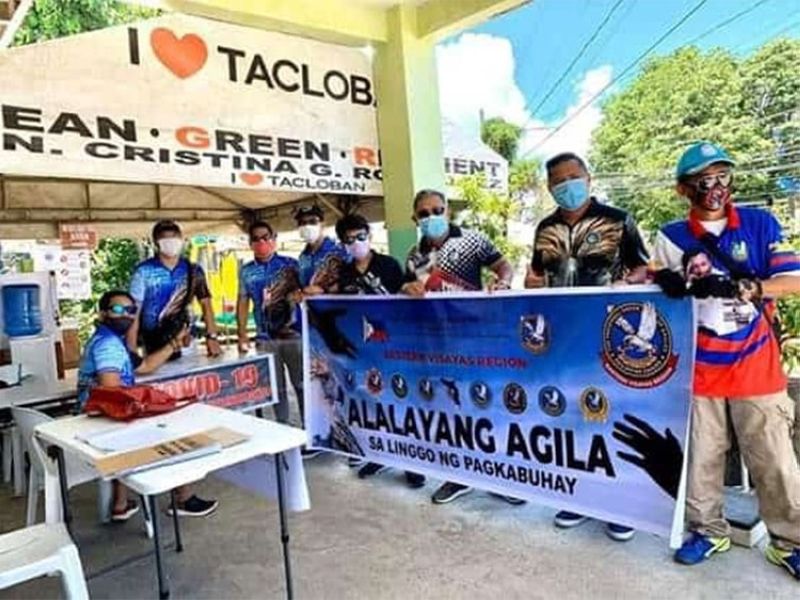 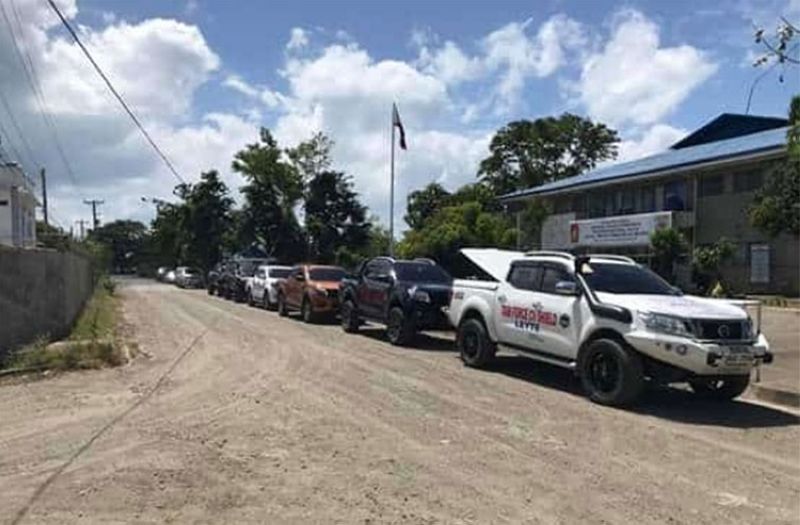 LEYTE. Star Apple Foundation volunteers in Maasin City weave masks for the residents and frontliners in the city. (Contributed photo)

CARLO Ngoho, 36, is a school head in Tabango, Leyte, but for now, he runs errands for his relatives and neighbors who are trapped in their homes due to the enhanced community quarantine amid the coronavirus disease (Covid-19) pandemic.

In between his assignment as leader of the emergency medical team in their town, Ngoho picks up and delivers money for his kababayans even up to the farthest barangay, which requires him a one-hour drive on board his old motorcycle.

“It’s very satisfying that you were able to help in a little way,” said Ngoho of Pining Paglingap Elementary School, a remote and mountainous school located about 12 kilometers away from the town proper.

In Tacloban City, businessman Rhoel Ladera and lawyer Hermie Alcera II are organizing a drive to help the frontliners anywhere in the region through their car club Navara Nation Philippines-Eastern Visayas (NNP-EV) chapter.

On board their sleek pick-up trucks, NNP-EV members, dubbed as “Angels on Wheels,” voluntary transport food supplies, medicines, and medical equipment, providing logistics support to the government’s anti-Covid-19 response across the region, being deputized under the Inter-Agency Task Force CV Shield.

“As much as we want to stay in the safe confines of our homes, our hearts bleed at the thought that others are out there fighting for us while we belabor on what to watch next on Netflix. Despite the risk to us and our families, we dared to venture out as NNP-EV partnered with various organizations, giving a solution to their logistics problem,” wrote Alcera.

“Yes, we fear this virus. But we are filled with hope that humanity can survive this storm if we will take care of each other,” he added.

Irish national Pascal Canning, 58, did not also think twice about helping the residents and frontliners in Maasin City.

Through his Star Apple Foundation, Pascal made and distributed masks, gloves, and other personal protective equipment (PPE) to the different barangays in the city.

“All masks are washed and packed in hygienic conditions,” he said.

He also uploaded a video to help the public on how to make the three-layer cup masks for the frontliners.

He appealed for more cotton or fake cotton, light quilt filler cloth, and garters or elastics so they can make more masks.

As of Monday, April 13, Pascal and his wife Eden, along with a group of volunteers from Caimito Beach Resort, were able to make and distribute 960 masks. Pascal, who also built houses for the 2013 Super Typhoon Yolanda survivors in the region, also launched the “meals on the wheels” for indigent senior citizens in the city.

Despite being trapped in their homes, public school teachers Ma. Isolde Mangyao and Carol Edillo are leading a relief drive for the needy residents in Libagon, Southern Leyte.

Through the financial assistance from their classmates abroad, they were able to distribute 110 relief packs.

They were thankful to their benefactors Captain Elmer Rodriguez and Mhina Rodriguez, along with their schoolmates from elementary batch 1987-1988 and high school batch 1991 and 1992.

Marife Shikasho, a Filipino living in Japan, also rushed to send help to her kababayans in Maasin City while bracing for the same health crisis in her newfound country.

She donated 15 sacks of rice, benefiting some 170 households at her barangay in Maasin.

Charity also abounds online as people in the region used social media like Facebook and other crowdfunding sites for donation drives.

“It's been more than two weeks since we started this drive. Throughout the 14+ days of our operations, we were able to give to health institutions from the ends of Eastern Visayan islands. We would not have been able to give to our healthcare frontliners had it not been for the spirit of kindness and generosity the poured from everyone who saw our calls for donation,” the group said.

“We are more than grateful for everyone's help,” it added.

“Let us not lose any of our medical practitioners who are at the frontline. They are our helpers. Without them, we will be in chaos,” wrote Garcia, as she appealed for financial aid for additional 400 PPE, 700 n95/kn95 masks, and eight aerosol boxes for the medical frontliners across the region.

Garcia also invited the public to join their Facebook group and see for themselves the art collections they are selling, along with their accomplishment and status reports for transparency purposes.

University students and faculty members across the region also apply their knowledge and expertise to serve the public.

University of the Philippines Visayas Tacloban College (UPVTC) has produced and donated alcohol-based hand rub following the standards from World Health Organization (WHO).

Leyte Normal University (LNU), headed by Dr. Jude Duarte, continues to give PPE to hospitals, offices, and barangays in Tacloban and nearby towns.

As of April 6, the university’s emergency response team distributed a total of 870 face shields, 780 face masks, 114 gallons of disinfectants, and 193 rice packs to identified beneficiaries.

Earlier, they distributed 2,000 face shields, 1,500 face masks, and 50 gallons of disinfectants to the frontliners.

Dr. Rey Garnace, LNU chief administrative officer, said the emergency response team will be producing liquid soap for their adopted community, along with the continued production of PPE and disinfectants.

The Samar State University (SSU) also distributed some 756 gallons of hand sanitizer to residents and frontliners in Catbalogan City.

NWSSU faculty members have been producing energy-packed cookies and electrolytes, and immunity-boosting buko juice for the frontliners.

They are targeting 1,800 packs of cookies and 1,800 bottles of buko juice to be distributed for two weeks.

“As the pandemic continues to change the lives of many, the impressive culture of Filipinos, the ‘bayanihan’ spirit and resiliency, also shines and gives silver lining to all,” the university said in a statement.

Employees from SLSU-San Juan Campus also gave face masks to indigenous people who were having a hard time in finding PPE supply in their town.

SLSU-Hinunangan Campus officials and faculty members were making face shields with sun visor for the frontliners who are manning the checkpoint areas.

On Sunday evening, April 12, lights and sounds operators across Eastern Visayas joined the one-hour illumination of the dark skies to generate funds for frontline health workers.

Businessmen and professionals comprising the San Juanico Eagles Club joined other club members in the region for an Easter Sunday community service dubbed as “Alalayang Agila sa Linggo ng Pagkabuhay” to the poorest families in three northern barangays of Tacloban.

Wearing a mask, face shield, and gloves, Fr. Amadeo Alvero is going around his parish in MacArthur, Leyte to do individual confession.

“What I am doing is an extra sacrifice for those who like to have a confession but cannot go to the church due to the enhanced community quarantine,” said the 50-year-old priest, who is observing social distancing protocol in giving the sacrament.

In Caibiran, Biliran, Major Dinvir Revita of the Police Regional Office (PRO)-Eastern Visayas launched a fund drive to provide milk to babies, pregnant women, and elderly in the town.

Eastern Visayas-based partylists Tingog Sinirangan and An Waray donated disinfecting tents, PPE, masks, and disinfectants to frontliners in the region.

In Northern Samar, the Provincial Government has launched a free transport assistance for its medical workers and hospital frontliners around the province.

“We are riding the wave of change, working with what we have, and proudly helping our fellow Filipinos in this time of crisis,” said Rupert Ambil of the Surf Riders Club of Eastern Samar.

Meanwhile, a group of volunteers is launching a donation drive for displaced workers, students, and on-the-job trainees from Maasin City and Southern Leyte who are now stranded in Cebu City following its lockdown.

“There are 251 Maasinhons in our list and the number is increasing,” wrote Ronz Acasio Epiz, one of the volunteers in Cebu.

"We took the initiative to connect with them because we know how it feels to be away from the family especially at a time like this. What makes it worse is that many have not received any relief assistance here neither from the barangay nor city considering that mostly are ‘renters,’" the group said.

They created a Google sheet where anyone with the link can access and provide information to their stranded kababayans in Cebu.

The group also identified coordinators in every municipality to handle the list of names.

“We agreed that our topmost sources of assistance are our local leaders in Southern Leyte. We will just serve as catalyst for our fellow Southern Leytenos and our local officials...We believed that despite the issues and problems they are looking after in our hometowns, they will still do something to assist everyone here in Cebu,” the group said.

For details on how to help the stranded Maasinhons and Southern Leytenos in Cebu, contact 0951-780-1800 or Ronz Acasio Epiz on Facebook. (SunStar Philippines)