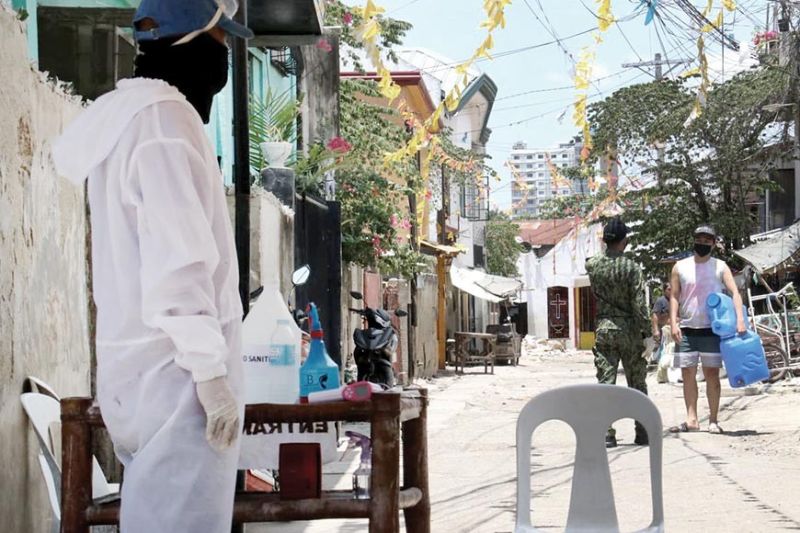 ANOTHER SITIO UNDER WATCH. A barangay public safety officer of Barangay Labangon, Cebu City and a member of the Philippine National Police from the Punta Princesa Police Station guard the entrance to Sitio Sto. Niño on A. Lopez St. Wednesday, April 15, 2020. Sitio Sto. Niño has been placed on lockdown after the first Covid-19 case was confirmed in Labangon on April 14. Sitio Zapatera in Barangay Luz, with more Covid-19 cases, is also under lockdown. (SunStar Cebu / Amper Campaña)

CEBU recorded 23 new coronavirus disease (Covid-19) cases on Wednesday, April 15, 2020, with 22 in Cebu City and one in Mandaue City, bringing the total number of cases in Central Visayas to 68.

Among the new patients in Cebu City were two nine-month-old infants, a boy and a girl. They were the youngest cases recorded in the city.

The new reported confirmed cases all have negative to mild symptoms.

Cebu City has the most cases in the region with 53, the Department of Health (DOH) 7 reported. Fifteen of the cases recovered, while five patients died.

Authorities said the 22 Covid-19 cases recorded on Wednesday in Cebu City—21 from Sitio Zapatera, Barangay Luz and one in Sitio Good Shepherd, Barangay Guadalupe—was the highest number of new cases recorded in a single day.

Zapatera has been placed on a lockdown since April 7, after the first of its residents tested positive of Covid-19. Luz Barangay Captain Ronilio Sab-a urged the City to send more police officers in the sitio as there were still residents who refused to stay at home.

A local health official feared that more cases will be identified in the coming days as the City Health Department (CHD) starts its mass testing.

“This will continue to increase. We are not at the peak yet,” said Dr. Daisy Villa, chief of the CHD.

Health experts around the world have been calling for a mass testing for coronavirus to determine the extent of its spread, and the results can help the authorities in making informed actions to contain the spread of Covid-19 infection.

The city was placed under enhanced community quarantine effective 12 noon of March 28 until 12 noon of April 28.

Some barangay officials in Cebu City asked the DOH 7 to inform them directly about the statuses of the Covid-19 patients that came from their villages.

They said they only learned about the cases in their barangays through Labella's announcements and news from media outlets.

Guadalupe Barangay Captain Michael Gacasan said they are confused on what to do due to lack of information from the DOH 7. With a new case Wednesday, Guadalupe has now six Covid-19 patients but five of them already recovered. On the evening of April 14, the barangay restricted the entry of non-residents.

Luz Barangay Councilor Maynard Salinguhay asked the DOH 7 to provide them with the profiles of the patients. The new 21 Covid-19 patients from Sitio Zapatera brought the total number of patients in Luz to 29. City health officials tested 360 individuals in the sitio.

In Barangay Labangon, its first Covid-19 patient was reported last Tuesday. The patient, a vendor, is a resident of Sitio Sto.Niño (not Sitio A. Lopez as earlier reporter), which was placed under lockdown.

Labangon Barangay Captain Victor Buendia feared that the sitio might be contaminated as it has around 300 residents who live in a packed neighborhood.

Mambaling Barangay Captain Gines Abellana said he has to seek the assistance of the CHD to locate the residence of the village's first Covid-19 patient. He could not decide on his own whether to place the sitio where the patient's family resides on a lockdown, saying he would rely on Labella's decision.

The DOH 7 said the new case in Mandaue City is a 73-year-old man, who hails from Barangay Casuntingan.

The patient is currently admitted in a hospital in Cebu City. He initially manifested influenza-like symptoms but he is currently asymptomatic, the DOH 7 said.

According to the Mandaue City Public Information Office, the City Health Office, disaster personnel and Casuntingan barangay personnel have cordoned off the patient's residence. The patient's family was ordered to undergo strict home quarantine.

The fourth Covid-19 patient in Lapu-Lapu City believed that the cough she has could be a result of work-related stress, recalling that she let her sweat dry up while distributing rice in Olango Island last week.

The 45-year-old patient, who works for the Barangay Mayor's Office, proceeded to the Hoops Dome in Barangay Gun-ob in the city's mainland. She participated in repacking relief goods.

Last April 8, she admitted herself to a hospital. She later got the news that she tested positive of Covid-19. Three days later, April 11, the intravenous dextrose was detached from her body. Her doctor told her to wait for the result of the second swab sample.

The cases in Mambaling and Lapu-Lapu City were among the cases already counted before Wednesday.

There were no new deaths Wednesday, and the total number of deaths in the region remain at eight.

For the first time since the Covid-19 pandemic began, the number of patients who have recovered from the disease in the Philippines exceeded the mortality.

The agency recorded in the last 24 hours 58 more patients who have recovered, bringing the total number of recoveries to 353.

Fourteen other patients lost their battle with the disease, raising the death toll to 349. (JJL, WBS & MVI WITH FVQ / CBQ)