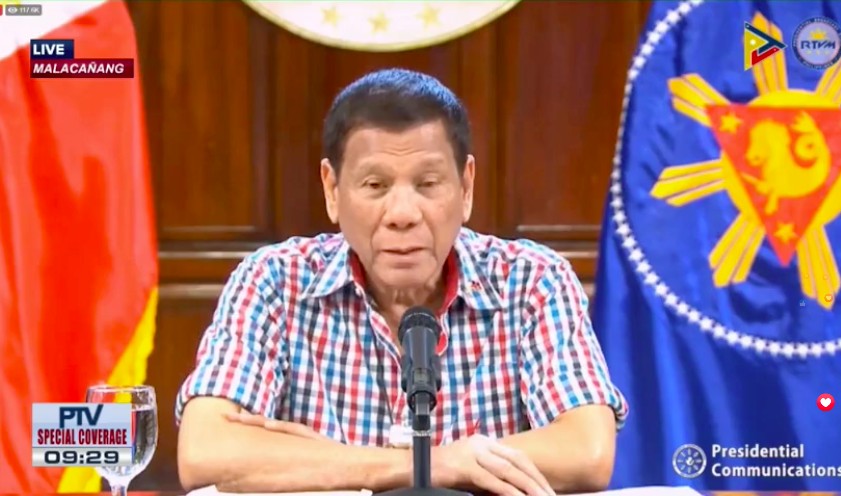 PRESIDENT Rodrigo Duterte on Thursday night, April 16, said a military and police takeover is possible next week if citizens continue to ignore social distancing protocols as a measure against the further spread of the coronavirus disease (Covid-19).

The President, in his latest late-night address to the nation, gave the citizenry a choice between practicing self-discipline and a “parang martial law” policy.

Duterte said that based on the advice from the health experts, lifting the quarantine restrictions hastily might result in a second or third wave of infections.

“I’m just asking for your...disiplina. Kasi pag ayaw ninyo, ayaw ninyong...mag-take over ang military pati pulis. I am ordering them now to be ready,” he said

He appealed for patience while humanized antibodies are being developed to treat Covid-19.

Experiments have shifted into high gear and an antibody treatment might be available “in a few days,” he said. Once such a treatment is available commercially, the President reiterated that he would immediately lift the quarantine restrictions.

Duterte said he could understand the public’s desire to end the quarantine because he, too, wants it to end.

The Davao City mayor is the President’s daughter, Sara Duterte-Carpio.

(I could not even go home to Davao for the birthday celebrations of my grandchild, my partner and my child because the mayor would not allow any passenger aircraft to land in Davao City.)

Whether that is in line with the national government’s quarantine guidelines or a violation of a person’s right to travel is going to be a lengthy debate, the President said.

He said he does not want to quarrel with his daughter, who is merely trying to protect the people of Davao City.

Duterte said he believes that visitors carrying the novel coronavirus had already infected some locals even before he declared the general community quarantine over Metro Manila on March 15.

This was upgraded to an enhanced community quarantine and expanded to cover the entire Luzon, where more than 52 million citizens reside, on March 17. The quarantine was supposed to end a month later, but has been extended to April 30.

He called on the local government units to follow the quarantine guidelines.

He also ordered the Department of the Interior and Local Government (DILG) to investigate those who continue to engage in cockfighting and drinking sessions despite the quarantine.

The President said those caught in these prohibited activities should not expect any help from the government.

The government is providing cash assistance of P5,000 to P8,000 a month for two months to each of the 18 million low-income families. About half of the P205 billion allocated for this purpose has been released.

Duterte said the government is currently using its savings to finance the Covid-19 response. Once the savings are depleted, the government will use the loan proceeds from the Asian Development Bank and the World Bank.

Once the loan proceeds are spent, the President repeated that he will dispose of certain government assets.

As of 4 p.m. Thursday, coronavirus infections in the country have increased to 5,660, including 362 mortalities and 435 survivors.

Globally, more than 1.9 million people have been infected as of April 15. There have been 123,010 deaths, according to the World Health Organization. (MVI/SunStar Philippines)