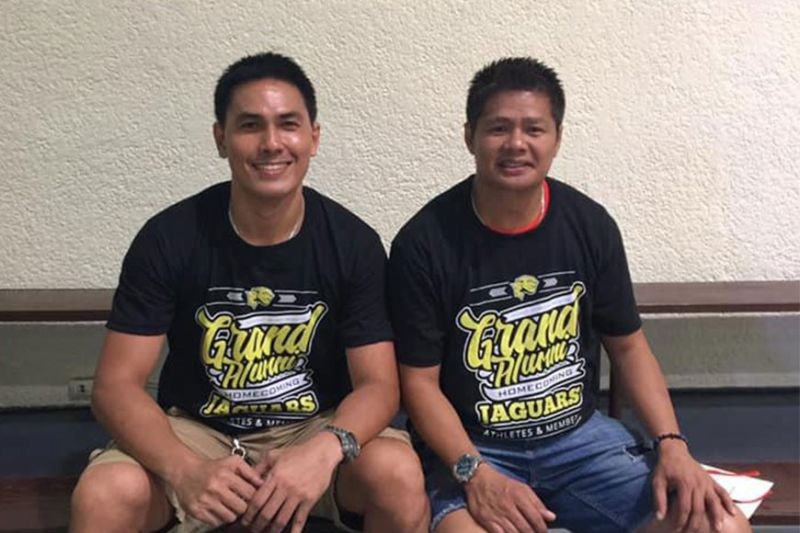 MEMORIES OF MAUI. Former teammates, coaches and rivals of Manuel Huelar (right), who was slain in Bacolod City on April 16, 2020, describe the former University of San Jose-Recoletos star as the ultimate teammate. With him in photo is former PBA star and USJ-R alumnus Roger Yap. (Contributed Photo)

FORMER teammates, coaches and rivals of fallen basketball player Manuel “Maui” Huelar had nothing but great memories of the former Negros Slashers and University of San Jose-Recoletos (USJ-R) star.

Not long after the news of his tragic passing spread after he was gunned down in Barangay Villamonte in Bacolod City on Thursday afternoon, the tributes poured in.

Two of his teammates on the USJ-R squad that captured the collegiate championship in the 1993 season of the Cebu Amateur Athletic Association (CAAA) — former Cebu Gems big man Leode Garcia and ex-Manila Stars off-guard Joel Co — shared some of their stories with SunStar Cebu.

“We were like brothers because we played together in so many teams here in Cebu like Sunpride Foods, Hapee Toothpaste and we were all under coach June Noel. We were also the last team to win the CAAA title for USJ-R back in 1993 with John Ferriols, Joel Co and Rowel Lawas,” said Garcia, who currently is the head coach of this current batch of Jaguars. “Even during the MBA, when we played for rival teams—me for the Cebu Gems and Maui and Ferriols for the Negros Slashers—we were still close despite the rivalry.”

Co, who was just a rookie during the 1993 season when Huelar was named the CAAA’s Most Valuable Player, described the latter as “the ideal teammate on and off the court.”

“Maui was really a good friend. He’d greet everyone na masugatan niya if kaya. He was obviously the anchor of our team. He ran the show. We rode his back! He was very competitive and witty. He was not the best defender in terms of lateral movement but for some reason, daghan kaayo siya steal kay sneaky and maayo mo timing,” said Co. “For me, he was an ideal teammate on and off the court. That was my rookie year. I didn’t get much minutes but when I was out on the court, he made sure that I was always ready to shoot because he always told me ‘pre, ayaw pag duha-duha ug tira ha. Ready ka kay tagaan tka bola,’” fondly recalled Co.

“And when I became the hero of Game 3 of that championship series against UV, I believe he was the first one to jump on me to congratulate me.”

“I would always compare him to that of Patrick Beverley in the NBA. I think every team has to have a player like that. He didn’t care about stats. He played with passion and he did his job well kay maguba man sad ang duwa sa iya bantayan,” said Hontiveros, now a Cebu City councilor.

Huelar was also a known advocate of grassroots basketball in Bacolod City. And according to Ateneo de Cebu’s athletic director Rico Navarro, Huelar always welcomed the Magis Eagles with open arms whenever they were in town.

“Maui was always a winner at USJ-R, Sunpride and the Negros Slashers. Best trash talker at the pro level. He always took care of a dinner for the SHS-Ateneo team every time they were in Bacolod,” shared Navarro.

Another one of Huelar’s contemporaries, Arvin Bonleon, who is now an assistant coach with the Maharlika Pilipinas Basketball League’s Davao Occidental Tigers, also shared his warm memories of Huelar.

“We were very close friends. We used to play against each other during his Sunpride and MBA days. He was a very funny person, inside and outside, but very competitive during the game. When it comes to fullcourt press, I think he’s the one who could mostly deny me the ball most of the time,” said Bonleon. “During our MBA days, whenever the Davao Eagles play Negros, he would fetch me from the hotel and we would eat at a seafood place. He did that always. It was the same when Negros would visit Davao, I’d fetch him from the hotel. We were like brothers during our MBA days.”

Carlos “Noy” Sayon, a teammate of Huelar on those vaunted Slashers squads, said the two of them became close since they were always roommates during out-of-town games.

Huelar’s former coach at the University of St. La Salle, Ricky Dandan, had nothing but praise for his former ward.

“Yes, he played for USLS before going to cebu. Mawe was a joy to coach, he was a fighter, a good teammate and would respond so well to coaching. He was an energy guy and got his minutes because of his tremendous defense. He made good use of his playing time to develop his game further,” said Dandan, who is now one of the braintrust for the University of the Philippines Fighting Maroons in the UAAP.

Officials of a team that he once played also shared their memories of the late cager, albeit anonymously.

“Maui made winning look so effortless. You couldn’t help but smile as he tried to sneak his way into the shaded lane to try to yank the rebound out from under opposing big men’s grip, and more often than not, he did it; hence the nickname given to him by beloved teammates “the snatcher,” the statement read.

“On a more personal note, this man wasn’t just a point guard on the court, but also in the way he conducted himself. He was always seeing how best to have everyone succeed much like a basketball team. The joy and laughter he brought into any team huddle was genuine. Naa times na gusto siya mag seryoso sa mga huddle and then nobody would believe him kay he always had this sly smile that sort of said “oo, naglisud ko pa seryoso pero sige nalang gud” or however he says that in his trademark Hiligaynon accent. He will be missed immensely by everyone whose lives he touched with his joy and disarming smile. Rest in peace, my friend.” (JNP)