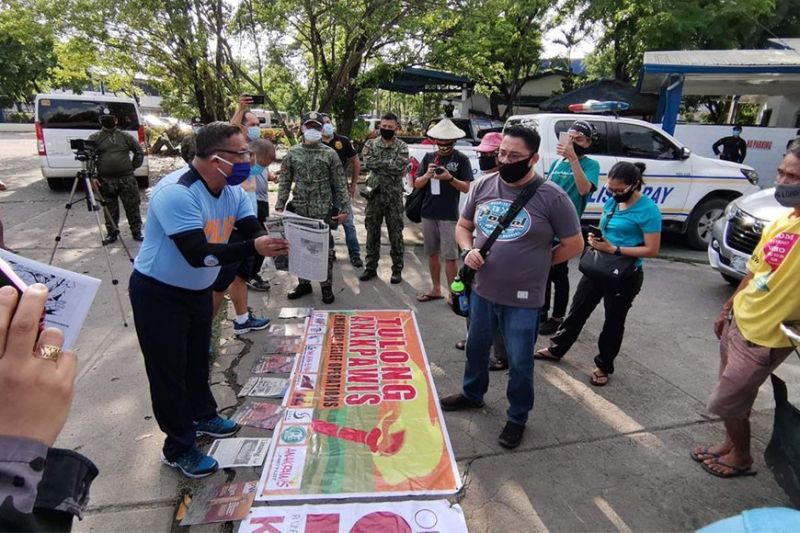 POLICE said six members of the left-leaning party-list group Anakpawis were arrested after “subversive” pamphlets and other documents were found under food packs that they were supposedly transporting to affected communities.

On both sides of the jeepney were tarpaulin posters announcing the group’s relief operations. But beneath the food packs that the group was transporting, police found pamphlets, magazines and circulars with subversive content.

The relief packs were released and turned over to officials of Barangay Bigte for proper disposition.

Former Anakpawis Party-List representative Ariel Barring Casilao, who appeared before the Norzagaray Municipal Police Station to intercede on behalf of the six arrested members, will face charges for violation of RA 11332 and additional charges for usurpation of authority under Article 177 of the Revised Penal Code for misrepresenting himself as a party-list representative.

Casilao served as Anakpawis representative during the 17th Congress that ended in June 2019.

“Casilao is not a member of the 18th Congress as he claimed himself to be when he tried to intercede on behalf of the arrested Anakpawis members,” said Banac.

“It is terribly disturbing that this organization which styles itself as pro-people advocates of public welfare will rather promote its anti-government ideology at the expense of public health during this critical period of a national health crisis,” said Banac.

“It is a matter of life or death that we need to make this quarantine work, but incidents of quarantine violation like this make containment efforts against the virus less effective and detrimental to public health,” he added.

DILG Undersecretary and spokesperson Jonathan Malaya said it was a clear violation of the enhanced community quarantine (ECQ) guidelines.

Four of the arrested persons are from Quezon City, one from Caloocan City while the sixth is from San Jose Del Monte in Bulacan.

“Breaking the quarantine rules is breaking the law. 'Wag po tayong pasaway. You are only allowed to go out of residence to buy food, medicines or for medical emergencies. By doing this obvious propaganda stunt, Anakpawis has placed the lives of the people of Bulacan at risk. Wala pong pinipili ang COVID-19 (coronavirus disease 2019). Mayaman man o mahirap,” said Malaya.

“We wish to remind Anakpawis that the virus cannot spread by itself. It has no legs. It is people that spread the virus. You give us no choice but to file charges against you. Wala po tayong special treatment kahit may congressman kayo. Ang lahat ng pasaway, kakasuhan,” he added.