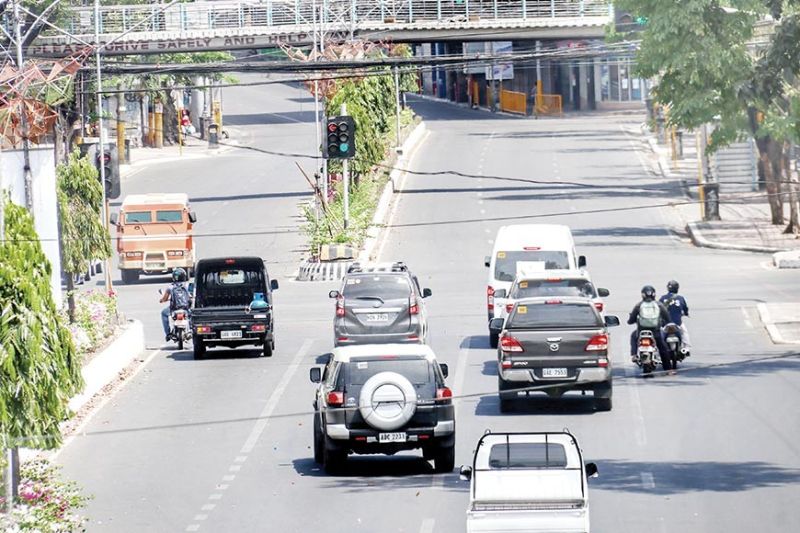 NUMBER CODING. Fewer vehicles are on Osmeña Blvd. on April 20, 2020, the first day of the number coding scheme in Cebu City. On Mondays, vehicles with license plates ending in odd numbers are allowed on the road. (SunStar photo / Amper Campaña)

Cebu City Mayor Edgardo Labella issued a memorandum to Cebu City Police Office (CCPO) director Police Colonel Josefino Ligan on April 20, 2020 stating that vehicles owned or operated by the said industries are exempted provided they were issued the Authority to Travel by the mayor’s office and Special Permit issued by the Land Transportation Franchising and Regulatory Board (LTFRB).

However, Labella clarified that vehicles privately owned by employees of the said industries are not included in the exemption.

“...private vehicles owned by employees of BPOs, KPOs and export-oriented industries are not part of the exemption and must comply with the coding scheme as mandated by Executive Order No. 70,” the memorandum reads.

Labella, in his press conference, said the exemption granted to workers excused from Stay at Home Orders, government officials, workers of establishments exempted from closure order extends to their vehicle’s plate numbers.

On April 20, the Cebu City Government started the implementation of a number coding scheme to regulate the movement of vehicles in the city while the enhanced community quarantine (ECQ) is in effect.

On Sundays, no vehicles are allowed to ply or roam around Cebu City.

The order covers all motor vehicles including motorcycles, that use public roads, streets and thoroughfares.

On the first day of the implementation of the number coding scheme in Mandaue City, the Traffic Enforcement Agency of Mandaue (Team) assessed that a lower number of vehicles were plying city roads.

According to lawyer Ernesto Maringuran, the head of Team, at 3 p.m. of April 20, the border point near Innodata, Barangay Subangdaku, Mandaue City, experienced moderate to heavy traffic due to the stricter border control checkpoint.

Later, after an hour, Maringuran said that traffic had eased up.

Most of the vehicles on the road were vehicles transporting essential goods. There are still private vehicles but most of them have essential workers on board.

However Maringuran admitted that they still cannot determine the effectiveness of the number coding scheme.

He clarified that the number coding is not just enforced at the borders but also within Mandaue City.

In a separate interview, lawyer John Eddu Ibañez, executive secretary of Mandaue City Mayor Jonas Cortes, told Sunstar Cebu that they mandated all companies with employees living outside Mandaue City to provide housing for their workers so they don’t have to cross borders.

Food- and goods-delivery workers can only operate within Mandaue City. (JJL / KFD)