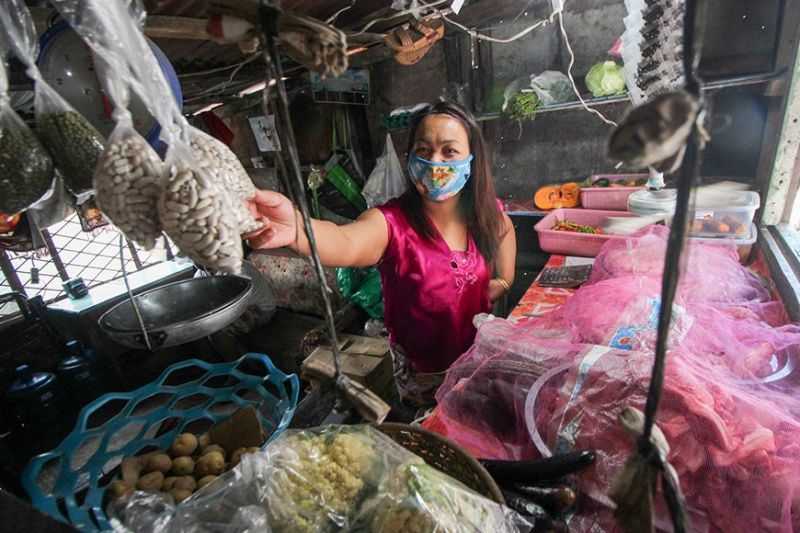 BAGUIO. A talipapa vendor in Barangay Pinget arranges the goods she just bought at the Baguio City Public Market. Since the implementation of the Enhanced Community Quarantine (ECQ) residents were mandated to follow strict market schedules. (Photo by Jean Nicole Cortes)

THE Baguio City Government will be undergoing gradual return to a new normal life assuming President Rodrigo Duterte declares an end to the Luzon-wide enhanced community quarantine (ECQ) after April 30.

Mayor Benjamin Magalong explained that the past weeks, the city has been engaging with different sectors to gather their inputs in having a workable plan after the President would make his final decision on the ECQ.

“We have been engaging the various sectors regarding the transition phase and assuming the President decides that we have a localized community quarantine starting May or the post ECQ, we are now coming up with our own transition plan which will be finalized this April 24 together with the specific guidelines and what we have to expect is that there will be no complete easing out of all sectors, we will not be opening up easily, business as usual will not happen. For the next two to three weeks, it will be in the form of baby steps,” Magalong said.

“We cannot just simply open up to construction. When we open up to construction, there should be another sector that will mutually supporting the construction industry which is why we have to open our hardware, auto supply, I.T. supply. We also have to ease up on our transport for the workforce the previous sectors will generate which is the vain of any economy,” the Chief Executive stated.

Based on the city’s public transport statistics, Baguio has some 3,334 taxi units while public utility jeepneys are at 4,800.

“We will start from 5% to 10% and slowly moving up through the form of baby steps. This is to give us the chance to make the immediate necessary adjustments when we encounter problems during the transition phase contrary to making a sudden leap and then encounter problems which will be very difficult for us to address which is why it will be in a form of baby steps,” Magalong saidt.

The chief executive reiterated with the final week of implementation of the ECQ, the residents should take cognizance of the 24-hour curfew and the guidelines of the ECQ to which violators will be meted the appropriate legal sanctions to be imposed by the Baguio City Police Office (BCPO).

“Assuming that the President would favor the lifting of the ECQ and allow local government to manage its local situation and that is why last weekend, I instructed our city director not to be considerate with regards to the treatment of violators which is why I instructed him to arrest and if need be, and handcuff these persistent violators,” Magalong added.

Meanwhile, the City Government has no plans of extending the distribution of the social amelioration program (SAP) to qualified recipients.

As of April 22, the city government distributed 44% of SAP.

Magalong informed village officials no extension of SAP distribution will be given after April 25.