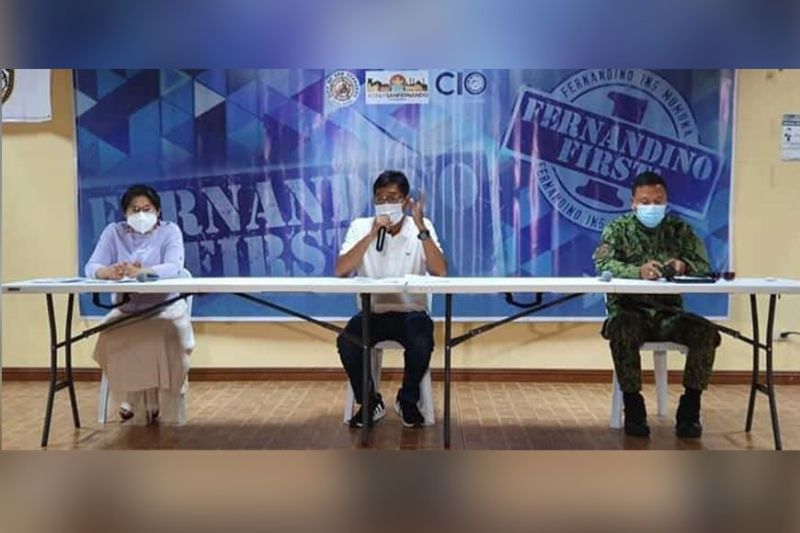 PAMPANGA. City of San Fernando Mayor Edwin Santiago gives a briefing on Wednesday evening, April 22, regarding the current situation of the city amidst the Covid-19 pandemic saying that this is the “New Normal” for people all over the world, reminding Fernandinos to trust and support the national and local government in this times of crisis. Joining him are Dr. Renely Tungol, Incident Command System head and Lt. Col. Paul Gamido, chief of police. (Photo by Chris Navarro)

THE City Government of San Fernando on Wednesday, April 22, said it has managed to curb the local or community transmission of the coronavirus disease (Covid-19) as Luzon goes through the last week of the enhanced community quarantine.

In a presser at Heroes Hall, Mayor Edwin Santiago said that at Ground Zero since the first case here, the city and its partners worked relentlessly to stop the spread of the virus in the city and its 35 barangays.

“On March 13, we said the situation is under control. This was born from comprehensive planning and preparation that started with the activation of the emergency operations center on January 21. Currently, we no longer have community transmission or local transmission. All are transient cases, according to our data from our Incident Command System,” he shared.

Incident Command System head Dr. Renely Tungol supported Santiago’s disclosure and said that as of April 22, the city’s number of cases is at 14, with active suspects of 87 and recoveries of seven.

“The first wave in San Fernando was in our Ground Zero and since testing is still limited for high risk patients, we could not see anything else at this point but we do active surveillance and mostly the cases we are looking at are pneumonia. So, we can say talagang controlled na ang community transmission,” she added.

Tungol added that in the city, there have been three severe cases and confirmed deaths with two suspect deaths.

“Hindi na kasi sila na-swab According to statistics, our severe cases are at.09 percent or about five percent of total population. With one percent mortality rate, we are still above the national government’s projection. In terms of recoveries, we are still above national recoveries which is 10 percent of the government, with the city at 50 percent. Manageable ang suspects. We have about 145 cumulative, all of them were discharged and negative of Covid-19 because of good reporting turnover with confirmatory tests negative. So, okay pa tayo,” she said.

Remaining vigilant, worst is yet to come

Santiago stressed, however, that even with managing and curbing community transmission, the city government will remain vigilant and not let the guards down.

“We were the first city in the region with a confirmed case but now we don’t have anymore. But we will not stop to be vigilant and not let our guards down since the worst is yet to come. Just like Singapore which was hit by a second wave, Hongkong, Taiwan, and Japan, so we will prepare more,” he said.

Santiago added: “In case of an extension, home quarantine and safe distancing will remain as solutions. We took advantage of the first extension to prepare more and we will now intensify testing and contact tracing as well as plan economic measures. We must not deliver or transfer the virus as well as check on transients who maybe carrying the virus to the city.”

“No one can tell when this will be contained unless there will be a vaccine. We are now talking about back to work on calibrated basis to adapt to the new normal and mitigate the pandemic. In our plan, agriculture will be the core to augment food supply and avoid social unrest due to hunger. Part of the conditions we set is not to sacrifice health and balance social and economic aspects,” he said.

Fight as one, heal as one

“The worst is yet to come. Let us not take in disregard our current situation. Previous cases have repeat infection. We are waiting for the President if local government units with no more cases if the quarantine will be lifted, eased or modified. There will be new norms like physical distancing, mass gatherings that cause transmission. We have to maintain it. Stay at home if you nothing important to do outside. Wear masks. Let’s follow guidelines of the World Health Organization,” Santiago said.

The mayor emphasized: “Trust God, trust the government. Have malasakit for others and the country. The government cannot do it alone. As we plan on what to do next in the future, let us continue to instill discipline among ourselves. Let us not sacrifice health. Life is at stake here. Let us help each other and continue what we have started and embrace the new life. Let us fight as one and heal as one.” (JTD)