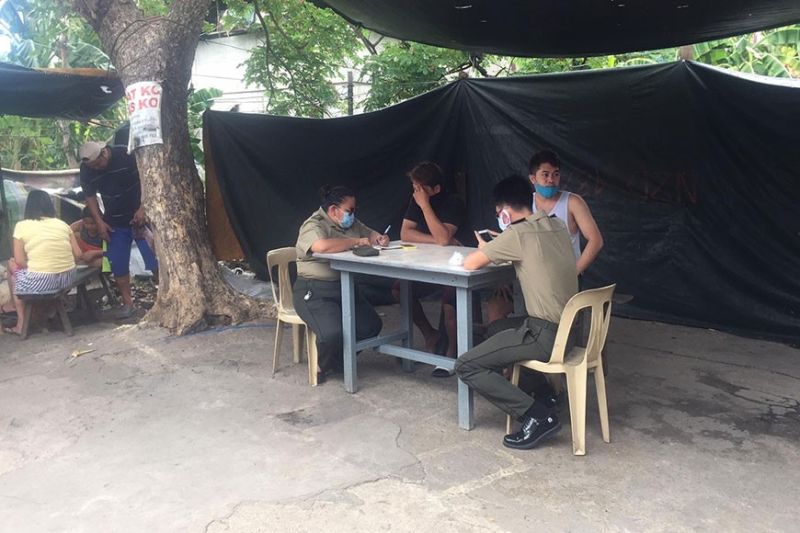 MANILA. Two personnel from the Office of the Judge Army Advocate of the Philippine Army interview some residents on April 24, 2020 regarding the shooting that killed former soldier Winston Ragos. (Contributed Photo)

THE Quezon City Police District (QCPD) has filed homicide charges against the policeman who shot and killed a former soldier for allegedly violating quarantine rules.

Florendo shot dead Winston Ragos, a former Army corporal, after the latter refused to heed the command to raise his arms and instead reached inside his sling bag near a quarantine checkpoint in Barangay Pasong Putik in Quezon City on April 21.

The Philippine Army has confirmed that Ragos suffered from post-traumatic stress syndrome (PTSD) and was discharged from service in 2017.

Philippine National Police (PNP) Chief Archie Gamboa on Thursday defended Florendo, saying he was merely following instructions to defend himself when confronted with an armed suspect.

PNP spokesperson Brigadier General Bernard Banac, for his part, maintained on Friday, April 24, that Florendo’s response was in accordance with the PNP’s Guidebook on Human Rights-based Policing.

Banac said that based on the PNP Guidebook on Human Rights-based Policing, the use of lethal weapons is necessary and authorized when the suspect is armed and has attacked or is attacking the police officer and any other individual using a lethal weapon.

It is also authorized if the suspect refuses to surrender after the police has exhausted all means to him do so.

Banac said a video clip on the incident clearly showed that Florendo Jr. had repeatedly given Ragos warnings for him to peacefully surrender.

However, Banac said Ragos ignored the warning and even acted like he was grabbing something inside his bag which prompted Florendo to shoot him.

"If the video clips were to be the sole basis of investigation it is apparent that the rules of engagement prescribed in the Revised Police Operational Procedures were observed during the confrontation,” Banac said.

"More importantly, when (Ragos) repeatedly defied the verbal command given by the police to yield and cease making provocative and threatening moves, as well as the use of firearms and application of deadly force," he added.

Banac assured that investigators will look at all angles.

For his part, PNP Internal Affairs Service Inspector General Alfegar Triambulo said they will be conducting a motu proprio investigation on the incident.

Earlier, the Commission on Human Rights also launched an investigation into the incident.

CHR spokesperson Jacquelin De Guia said the police must strictly observe the guidelines set for the use of force against a person.

The National Police Commission (Napolcom) has also assigned two investigators to look into the incident upon the request of the Ragos family.

"We dispatched already two investigators and they are now in the scene of the investigation. The family has expressed their preference that the NAPOLCOM should handle the investigation," Napolcom executive officer Rogelio Casurao said.

Casurao noted that the statement of key police officials will not affect the investigation.

He said they will include the video clips but the investigation will not be dependent of it.

"The video can guide you on the physical attributes of the incident but as to the other important matters, these were not shown in the video," said Casurao.

"Like the claim that the victim was armed with a .38 caliber, this was never shown in the video but beyond that during the investigation already, the presence of this .38 caliber came out already... There are things that can be taken from the footage, but there are matters that can be ferreted out after an investigation proper," he added.

Meanwhile, two personnel from the Office of the Judge Army Advocate of the Philippine Army went to the crime scene on Friday morning to conduct their own investigation. They interviewed several witnesses as well as members of the Ragos family.

The former soldier’s remains are at a funeral parlor as the family was still trying Friday to secure a permit to hold a wake. (SunStar Philippines)