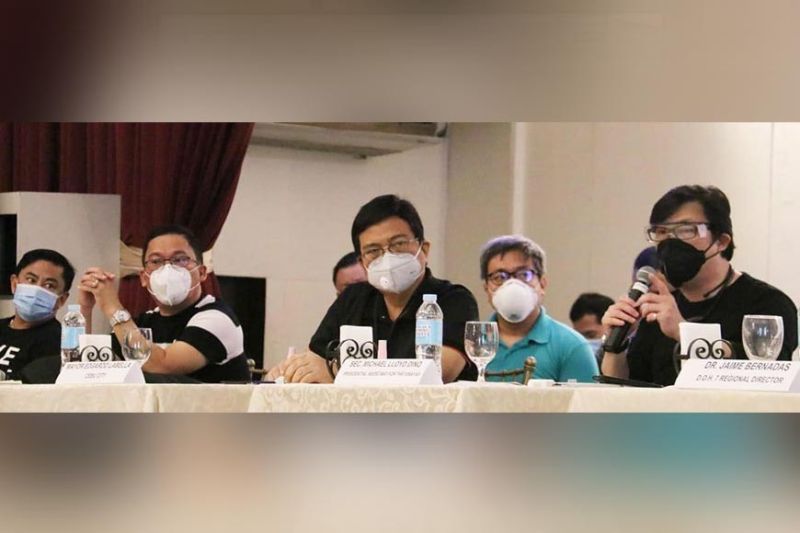 THE SITUATION. The May 15 deadline of the national government for lifting or modifying the lockdown has sent Cebu City and Cebu Province scrambling to get ready for a situation where the dreaded coronavirus could still be rampaging without some of the controls against it.

The Tri-City Project will test starting May 4 a total of 46,896 people from 10 percent of the households in the three cities, using 33 teams of nurses, medical technologists and barangay health workers. Beginning May 14, an unspecified number of employees in companies that top the list of those set to reopen will also be tested.

Earlier, the Capitol announced a similar plan for a rapid diagnostic testing (RDT), employing 50,000 test kits. But last Thursday, April 30, Regional Health Director Jaime Bernadas, at a meeting of Governor Gwen Garcia with health officers, indicated the governor would pursue an active case-finding of ILI (influenza-like illness) and Sari (severe acute respiratory infection) in the towns and cities comprising Cebu. They probably will identify the people to test, through the case finding, before undertaking the RDTs. Or Capitol may just continue doing the current testing of symptomatic persons and others tagged as ILI or Sari, along with tightening control of the province borders.

UNCERTAINTY. The common goal among Cebu LGUs is determining rate of infection in Cebu and seeking out the sick for isolation and treatment. But it is not certain which procedure would work more efficiently in preparing Cebu Cebu for resumption of business and “normal” life.

The rapid tests, approved by the Food and Drug Administration, won’t be immediately conclusive. Positives or negatives could be false and need to be re-tested, with the more reliable PCR (polymerase chain reaction) test.

RDTs will identify people infected in the past (whose antibodies would take four days from infection to be evident), while PCR detects active infection.

Bulk of business in 3 cities

First, the question in some people’s mind: why the three cities did not pool efforts on mass testing with the province. Have they still not threshed out the hitches which could have been the cause of some confusion in implementing the lockdown?

Briefs supplied by OPAV Asst. Secretary Anthony Gerard “Jonji” Gonzales cite (a) density of population in Cebu City, Mandaue City and Lapu-Lapu City and (b) “80% of Cebu’s economy” being generated in the three cities.

Yet it’s notably reassuring that data collected from strategies of the Tri-City Project and the Capitol case-finding and testing are shared by the LGUs with DOH as depositary of information. They must also be part of the bases for the Inter-agency Task Force on Emerging Epidemics (IATF-EID) in deciding the national plan against coronavirus.

problem of messaging from supervisors to

There were snags, which turned out to be caused by the health workers’ misunderstanding of what to report and partly by suspected lax overseeing.

A reported solution is the setting up of a quota system, which carries the inherent risk of bloating numbers to get the desired result. Still it could produce the warm bodies needed for expanded testing under the new procedure, instead of the old protocol of PUMs and PUIs, or patients monitored or investigated.

The “Balik Buhay” Project has its own expected problems:

[1] Getting people to agree to join the mass testing. (One per targeted household, the holder of the ECQ pass, OPAV’s Gonzales told Jason Monteclar of dyCM radio.) Some persons might fear the risk of being confirmed positive, then isolated or quarantined from their family, plus the “stigma” being associated by some groups or communities with the infection. And Gonzales reportedly said they wouldn’t force those who refuse to be tested.

[2] Setting off “panic” among the people if the numbers of positive cases soar, which the Tri-City Project says may be anticipated but not feared. The mass tests, plus the confirmatory PCR tests, are precisely aimed to identify asymptomatic Covid-19 patients who continue to infect as they mingle with other people once the lockdown is partly lifted.

Note “evidence-based.” Meaning, the evidence available in the world, which, despite or because of the horde of experts, could be uncertain and contradictory.

What could happen, when

The May 15 deadline could see (a) lifting of the lockdown and shifting to general quarantine, with some modifications, or (c) keeping the ECQ but easing or tightening some restrictions. And the test results and case findings would influence decision by national government and LGUs.

That’s how important the RDTs would be, despite recognized inadequacy of its results, or the ILI-Sari case findings must be, despite discovered flaws in collecting data.

Misgivings notwithstanding, the Cebu public must lend support and vest its trust in the mechanism and the leaders who run it.