1,080 residents turn up for mass testing in Cebu, Mandaue 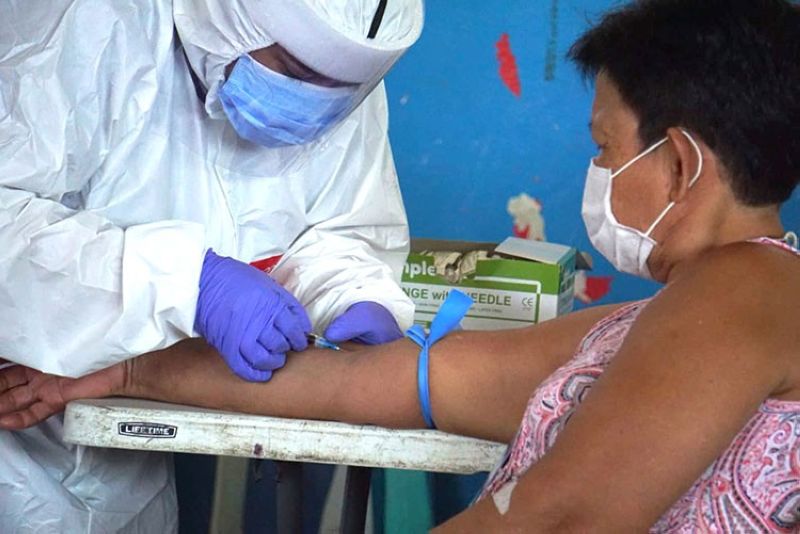 CEBU. Only around 190 residents from Barangays Inayawan, Basak San Nicolas and Basak Pardo in Cebu City took the rapid test on May 6, 2020. (Photo by Alex Badayos)

MORE than 1,000 residents took rapid antibody tests on the first day of the mass testing for the coronavirus disease 2019 (Covid-19) in the pilot barangays of the cities of Cebu and Mandaue on Wednesday, May 6, 2020.

Others chickened out for fear of contracting Covid-19 if they go outside their homes and fear of needle prick, some barangay officials said.

In the cities of Cebu and Mandaue, a total of 3,971 residents in eight barangays were listed to take the tests, but only 1,080 residents (27.1 percent) turned up in the testing venues.

Multi-sectoral Project Balik Buhay, led by the Office of the Presidential Assistant for the Visayas, initiated the rapid testing to determine the spread of the coronavirus disease 2019 in the cities of Cebu, Mandaue and Lapu-Lapu. The results would guide these local government units' next moves in dealing with the Covid-19 crisis.

It was worth noting that in Tawason several residents who were not included in the list volunteered to take the test. Tawason Barangay Captain Glenn Seno Bordorio said 40 persons in the list did not show up in the venue, but 50 residents volunteered. Since there were enough test kits, they were tested.

Aside from residents' refusal, the village chiefs in Cebu City said it was challenging to convince them to undergo rapid testing as they had doubts and questions relating to their safety.

Prior to the testing, Inayawan Barangay Captain Kirk Bryan Repollo said the residents had asked him and other village officers several questions that only the health officers can answer.

Some residents mentioned about the health workers' alleged practice of not changing gloves, while others asked why the test would not be conducted on a house-to-house basis. Others also asked if the persons staying inside their houses most of the time have to take the test.

Basak San Nicolas Barangay Captain Norman Navarro said they prepared 1,000 gloves for the testing, but not all were used.

In Basak Pardo, Barangay Captain Catalina Cabardo said the mayor's information and liaison officers did not coordinate with her in locating the residents listed by the health authorities.

If there was a proper coordination, Cabardo said her office could have informed the residents in advance. In a meeting with barangay captains last Monday, May 4, Cebu City Mayor Edgardo Labella reportedly told them to conduct an information drive about the mass testing. (JJL & JCT with a report from GCM)