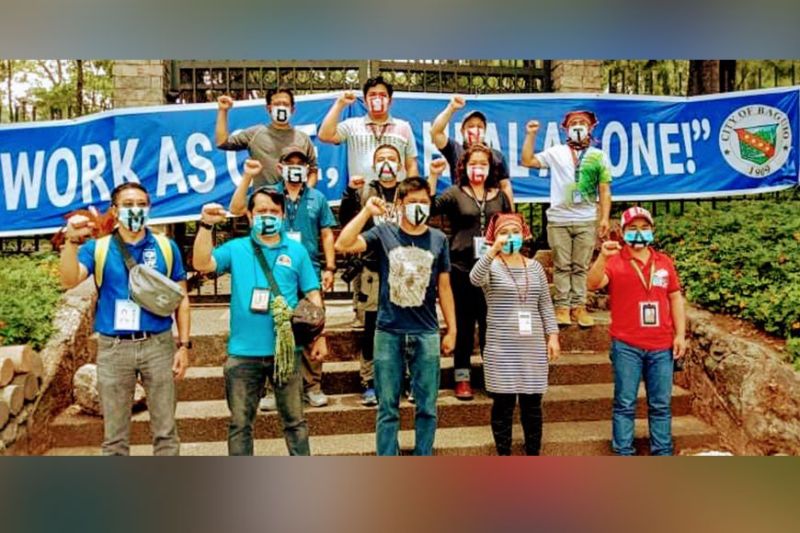 BAGUIO. The National Union of Journalists Baguio Benguet Chapter stages a protest against the closure of the television network, ABS–CBN Wednesday morning, May 6, 2020. The group calls to keep the press free. (Photo by Roderick Osis)

In a statement NUJP BB said “The closure of ABS-CBN is clearly an attack to press freedom in the guise of a franchise issue. Worse, it is even because of personal vendetta by no other than the highest official of the land. Under the Duterte administration, the franchises of GMA and TV 5, ABS-CBN was singled out. And the President has openly admitted he will block the franchise renewal of ABS-CBN.”

The network ceased broadcast operations after receiving an order from the National Telecommunications Commission (NTC) Tuesday, May 5.

The group of media men and women gathered at the Baguio City hall Wednesday morning, May 6, to denounce the network’s closing saying “Closing down one of the biggest news organization in the country at a time when we are faced with a pandemic, and dissemination of reliable information is crucial is just unacceptable. This move also violates the public’s right to information.”

The NUJP BB wore facemasks lined with letters forming the phrase, “Don’t gag the media,” as they showed solidarity with colleagues from the network and amplified the call to preserve press freedom.

“The NTC order is a slap to congress that even after committing to issue a provisional authority under oath opted to overstep congressional power. The closure of ABS-CBN sends a chilling message to media organizations especially small community media organizations that if they go against the whims of those in power, they will face the same fate,” the statement read.