43 OFWs arrive in Cebu; all negative of Covid-19 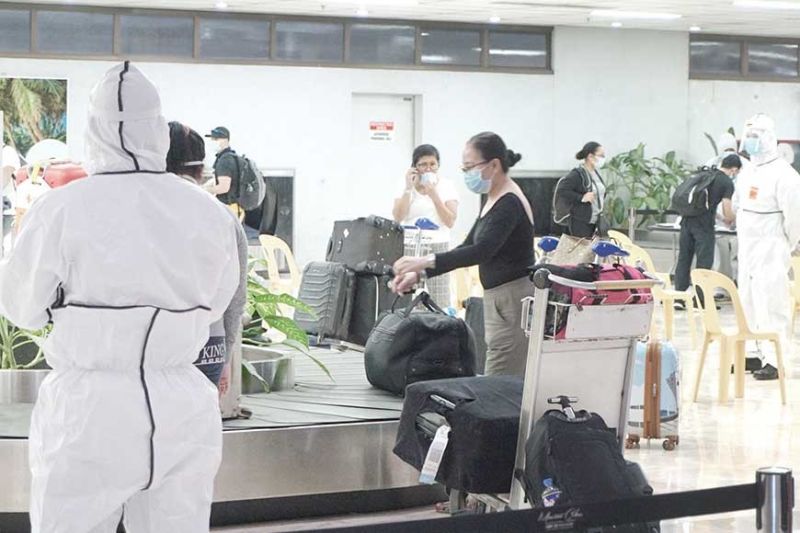 HOME AT LAST. Under the watchful eye of men in personal protective clothing, overseas Filipino workers (OFWs) collect their luggage at the domestic arrival area of the Mactan-Cebu International Airport Friday, May 8, 2020, following their flight from Manila where they had been stranded due to the Covid-19 induced lockdown. This is the second batch of stranded OFWs to arrive in Cebu following the arrival of more than 200 OFWs, also from Manila, on a passenger vessel on April 28, 2020. (SunStar Photo / Allan Cuizon) 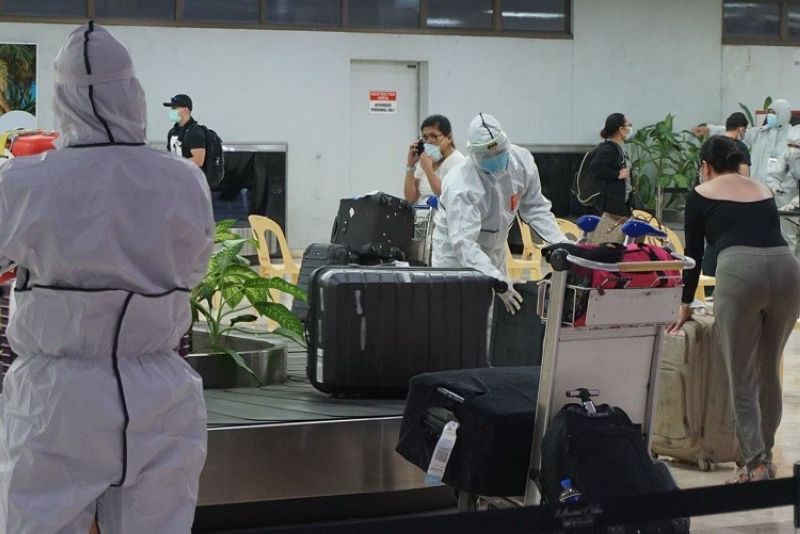 CEBU. Forty-three overseas Filipino workers, who were stranded in Manila for two months, arrived at the Mactan-Cebu International Airport via a sweeper flight on Friday, May 8, 2020. (Photo by Allan Cuizon)

FORTY-THREE Cebuano overseas workers who tested negative of coronavirus disease 2019 (Covid-19) in a swab test held in Manila arrived at the Mactan-Cebu International Airport (MCIA) in Lapu-Lapu City on Friday morning, May 8, 2020.

The overseas workers, mostly seafarers, are from Cebu City and towns in Cebu Province. They were stranded in Manila as they were placed under a 14-day quarantine, according to Girlie Veloso, a senior staff member of the Office of the Presidential Assistant for the Visayas.

This is the second batch of repatriated overseas workers to arrive in Cebu.

The first batch arrived in Cebu City via a 2Go ship last April 28, where of the 291 overseas workers, 243 were Cebuanos. They were brought to three hotels in Cebu City for a 14-day quarantine while the 48 Boholanos were transported to Tagbilaran City. The 291 overseas workers had been quarantined in Manila and they were cleared to go back to Central Visayas after the rapid antibody testing done on them yielded negative results. However, 17 of the repatriates later tested positive for Covid-19 using the real-time polymerase chain reaction (RT PCR) test.

Veloso said the new batch of Cebuano overseas workers had been cleared by the Department of Health (DOH) before they were boarded to a “sweeper flight,” a special flight that transports persons stranded in places under enhanced community quarantine.

The OFWs were subjected to a reverse transcription polymerase chain reaction RT PCR test for Covid-19 last Sunday, May 3. They all tested negative.

The RT-PCR test is the only test that detects the novel coronavirus. The virus is detected through nasopharyngeal swabs.

As the test results were recent, the DOH decided not to re-test the Cebuanos, said Veloso.

The overseas workers had stayed in Manila for about two months before they boarded the sweeper flight via Cebu Pacific bound for Cebu. They arrived at MCIA at 11:30 a.m. on Friday.

The Cebuano overseas workers were placed at the MCIA’s fifth waiting lounge. Ceres buses later fetched and brought them to a hotel in Barangay Guadalupe, Cebu City.

The same Cebu Pacific flight transported 230 passengers to Luzon on Friday, May 8. This was part of the efforts of the Department of Tourism (DOT) in the past seven days, which mounted two sweeper flights transporting 407 stranded domestic passengers from Cebu to Luzon.

The Overseas Workers Welfare Administration (Owwa) said the seafarers came from different countries, and some of them are living in provinces outside Cebu.

Eda Enclonar, Owwa administrative assistant, said their agency will shoulder the food and accommodation of the OFWs, who were billeted in a hotel in Cebu City.

The local government units where they belong will fetch them and they will be placed on another 14-day home quarantine. (JOB with a report from FVQ)