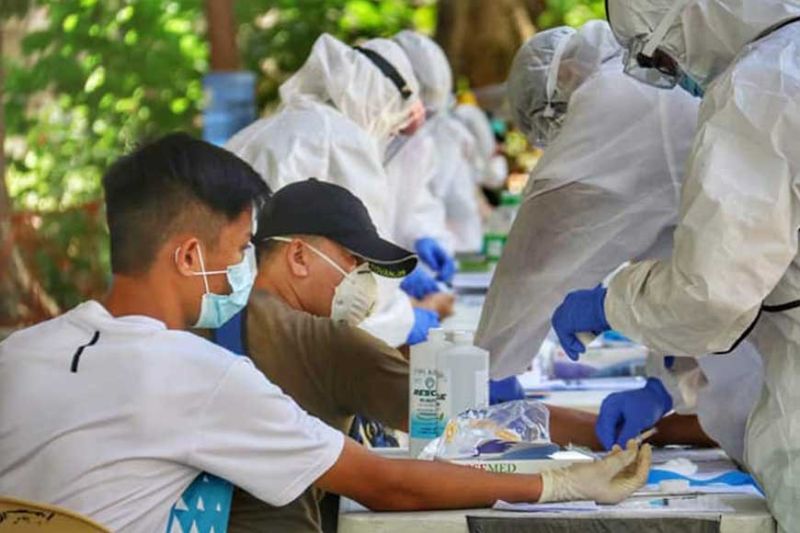 TIMING LOCKDOWN’S END. Rapid mass testing is conducted in Barangay Apas, Cebu City on May 8, 2020. Mass testing is being conducted in Cebu, Mandaue and Lapu-Lapu Cities to help gauge the scale of Covid-19 infection in these areas and guide local chief executives on setting a timeline for the lifting of the lockdowns in Cebu. (SunStar Photo / Amper Campaña) 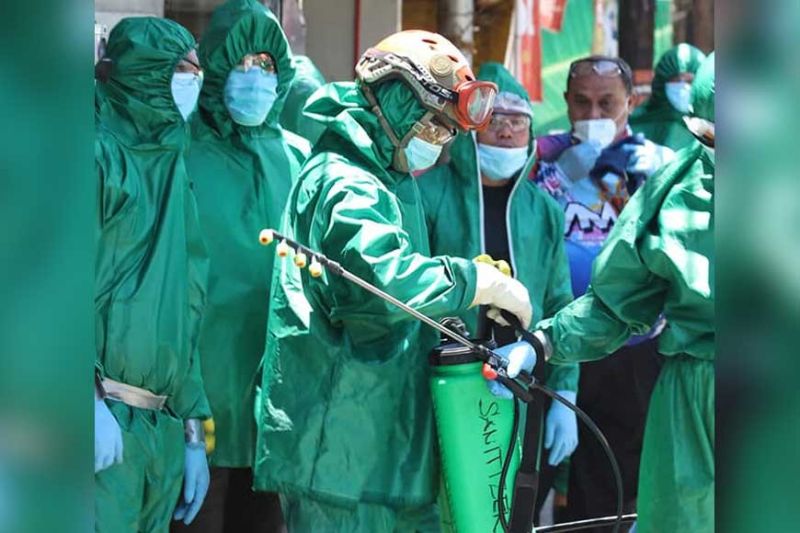 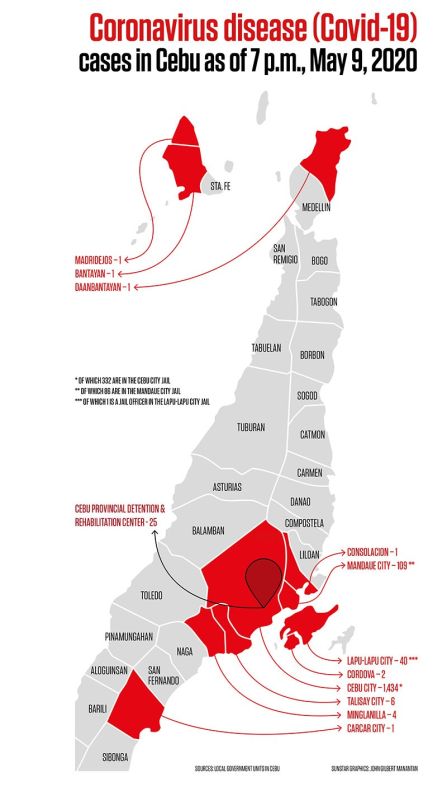 THE peace of Cebu was shattered when the first case of the coronavirus disease 2019 (Covid-19) was reported on the island on March 18, 2020.

The Department of Health- Central Visayas (DOH 7) said a 65-year-old male was confined at the Chong Hua Hospital Mandaue in Mandaue City.

The announcement was not totally unexpected, though.

Cebu is home to the Mactan-Cebu International Airport, the country’s second busiest airport. So it was just a matter of time before the new coronavirus (SARS-CoV-2) that had originated in Wuhan City in China in December 2019, would reach the province’s shores.

In early March, the virus had already spread to more than 100 countries after all. And on March 7, local transmission of the disease had been confirmed in Metro Manila.

Seven weeks since that first case was reported, the number of cases in Cebu has breached 1,600 -- despite the lockdowns, called enhanced community quarantine or ECQ, declared in Cebu City from March 28, in Lapu-Lapu City from March 29, and the rest of Cebu Province from March 30.

Residents had endured the restrictive lockdowns believing that in two weeks’ time -- the period the World Health Organization said was the incubation period for Covid-19 (the time between becoming infected and symptom onset) -- all the sick individuals would be revealed, then sent to hospitals for treatment, and the quarantine would be lifted a month from declaration.

But six weeks into the lockdown -- and aided by Cebu's capability to conduct mass testing -- the cases have only spiraled, reaching new and even remote areas, prompting frustrated residents to cry out: How did the virus get there?

It’s a question SunStar Cebu hopes to help answer with a list of the first patients reported in every new area in Cebu, which is not to say that these patients caused any subsequent infections in these areas.

Patient 1: A 65-year-old male from Barangay Tipolo who had traveled to different cities of Mindanao and Manila in the past two months.

Days to next reported case: 14 days

Patient 1: Porferio Daclan, 70, from Barangay Babag. With no travel history, he thinks he picked up the virus at a mall he frequented in the city before the imposition of the ECQ.

Days to next case: 2

Patient 1: A 27-year-old female from Barangay Ibabao, who had traveled to Manila and returned to Cebu on March 12.

On May 3, a Barangay Catarman resident, a former Mandaue City Jail inmate brought by the Bureau of Jail Management and Penology (BJMP) to Cordova on April 28, tests positive.

Total cases to date: 2 in 2 barangays

On March 29, the Cebu City Health Department says the first 20 cases are from 12 barangays.

Patient 1: A male resident, 84, of Barangay Lawaan 1, with no history of travel to places with a Covid-19 outbreak, who dies on April 5.

On May 1, a Barangay San Roque resident tests positive for the virus after visiting Barangay Inayawan in Cebu City on April 18 and meeting people who, on April 21 and 22, are found to have Covid-19.

Patient 1: A male municipal councilor, 54, who had gone to several countries as he had taken a tour of the Holy Land.

Patient 1: A 41-year-old male inmate rushed to the Vicente Sotto Memorial Medical Center (VSMMC) on April 18, because he had difficulty breathing, who dies soon after. But he is counted as the second Covid-19 patient from Barangay Mambaling, his address before he was imprisoned on Feb. 28. The Cebu City Jail is in Barangay Kalunasan.

Since jail visits had been suspended since March 18, Cebu City Health Department head Dr. Daisy Villa believes a female jail officer—reported on April 17 as the third Covid-19 patient from Barangay Labangon—may have brought Covid-19 to the jail. The jail officer’s last activity before she developed symptoms of Covid-19 was to go to a hospital in the city to accompany an inmate.

Patient 1: A 24-year-old male admitted at the VSMMC for complaints of dyspnea and edema. It’s unclear how the virus got to the jail in Barangay Looc since jail visits had been suspended since March 30.

Days to next case: 6

Patient 1: A 17-year-old boy with kidney disease from Barangay Guadalupe, a far-flung village. He is brought to the VSMMC on April 23 but dies on April 25. After insinuations that the boy could only have acquired Covid-19 during admission at the VSMMC, the hospital says it is possible even for those living in mountain areas to contract Covid-19. The hospital also denies claims the boy had been mixed with Covid-19 patients from the Cebu City Jail.

Patient 1: A resident of Barangay Kabac, who has been confined at the VSMMC since April 23.

Patient 1: The Provincial Government says 18 inmates of the Cebu Provincial Detention and Rehabilitation Center (CPDRC) in Barangay Kalunasan, Cebu City have Covid-19. When the virus hit the nearby Cebu City Jail, Gov. Gwendolyn Garcia ordered all jail personnel of the CPDRC residing in Cebu City barangays with Covid-19 cases not to report to the facility. The remaining jail personnel already in the facility were ordered to stay in the facility. But a CPDRC employee residing in Barangay Sambag 2, Cebu City did not obey her order. The employee got infected. The case was logged in Cebu City. Garcia thinks this employee may have brought the virus to the jail, as jail visitors had not been allowed since March 30 amid the threat of Covid-19.

Days to next case: 7

Patient 1: A 58-year-old man from Barangay Lanao. A kidney dialysis patient, he dies on the way to a Cebu City hospital on April 25. He had been going to Cebu City regularly for dialysis treatments, the latest of which was on April 22.

On May 2, Gov. Gwendolyn Garcia considers asking dialysis patients living in Cebu Province who have regular sessions in Cebu City hospitals to stay in the city for the meantime to avoid the transmission of the Covid-19 virus that might be acquired from the hospitals to their localities.

Patient 1: A woman from Barangay Pili, who recently gave birth. The asymptomatic patient is quarantined at the Bayanihan Center at the Sacred Heart School-Ateneo de Cebu satellite campus in Cebu City.