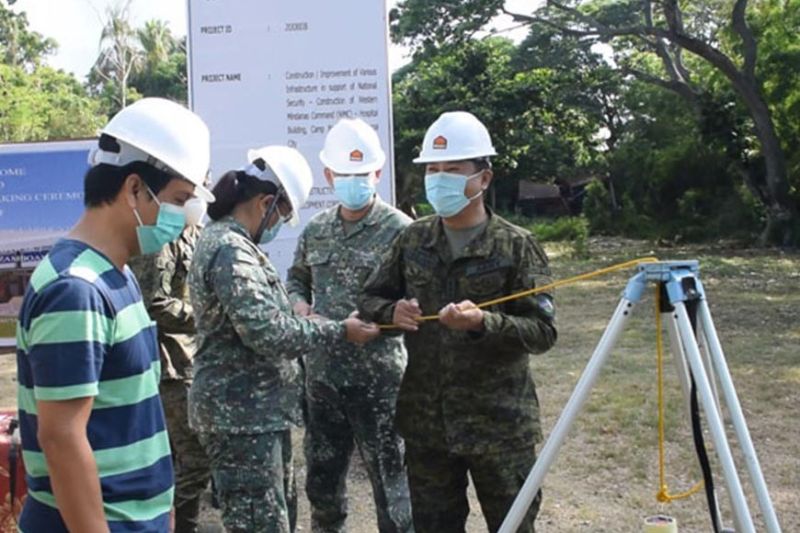 A modern hospital facility will rise at Camp Basilio Navarro that houses the Western Mindanao Command (Westmincom) headquarters in this city. A photo handout shows Lieutenant General Cirilito Sobejana, commander of Westmincom (right), leads the groundbreaking ceremony Thursday, May 7, that signals the start of the project. (SunStar Zamboanga)

THE Western Mindanao Command (Wesmincom) has commenced the construction of a modern hospital facility in Camp Basilio Navarro that houses the Westmincom headquarters in this southern port city.

Lieutenant General Cirilito Sobejana, commander of Wesmincom, led the groundbreaking ceremony of the project on Thursday, May 7, and was graced by Engineers Olyver Fortich and Archibald Genavia ofthe ESR Construction Corporation, and other Wesmincom officials.

The construction of the new facility at the Camp Navarro General Hospital (CGNH) was made possible through the implementation of the “Tatag ng Imprastraktura para sa Kapayapaan at Seguridad” (TIKAS) program of the Department of Public Works and Highways (DPWH).

Sobejana said project is a vision realized “through our convergence and hard work, a product of our succeeding confluence to achieve an improved health care service for the benefit of all the people in Mindanao.

He attributed the endeavor to President Duterte and the DPWH personnel who extended their benevolence and support.

Meanwhile, Sobejana, on behalf of the Wesmincom personnel and staff, expressed gratitude to the Department of National Defense and DPWH for the new treatment facility inside Camp Navarro.

“The TIKAS program was jointly planned and implemented by the DND, led by Secretary Delfin Lorenzana, and the DPWH to improve treatment facilities inside military camps and installations,” Sobejana said.

“We have our profound gratitude to the Defense leadership for choosing Wesmincom as one of its beneficiaries. This new treatment facility will aid the recuperation of our battle casualties and provide a more conducive and quality health care service,” he added. (SunStar Philippines)