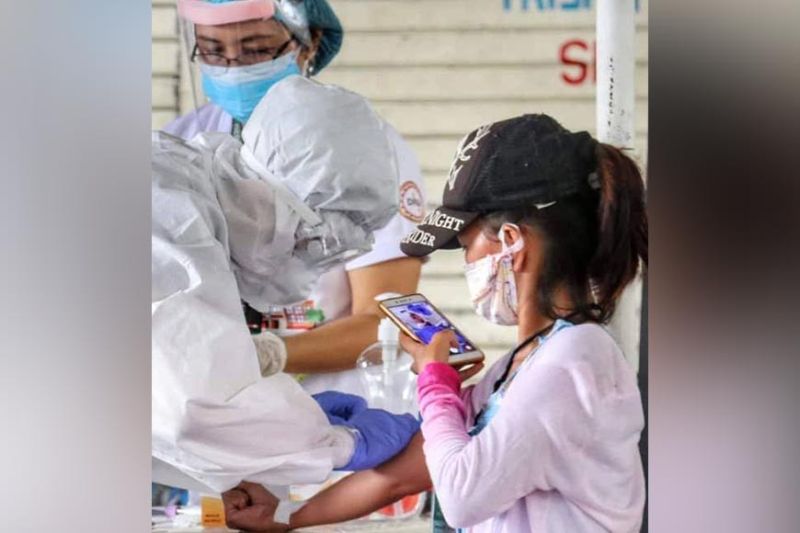 UNFAZED. A woman snaps a picture while a health worker extracts blood from her during a mass testing in Barangay Pahina Central, Cebu City on Wednesday, May 13, 2020. To attract more people to participate in the mass testing, local officials offered five kilos of rice to anyone who would volunteer to take the test. (SunStar photo / Amper Campaña)

THE implementors of the mass testing for the new coronavirus in the cities of Cebu, Mandaue and Lapu-Lapu plan to extend the testing beyond the May 15, 2020 deadline as the tri-cities failed to reach even half of their target as of May 12.

The mass rapid diagnostic testing in the three cities was still at 37.27 percent as of May 12, reported Department of Health (DOH) 7 chief pathologist Mary Jean Loreche in a press briefing on May 13.

With a two- or three-day extension, they hope to be able to meet 70 to 100 percent of the target, Loreche said.

The tri-cities targeted 39,564 residents to undergo mass testing. However, only 14,747 have been tested since the mass testing started on May 6. The mass testing is a multi-sectoral initiative called Project Balik Buhay (PBB), which is led by the Office of the Presidential Assistant for the Visayas. The PBB aims to guide these three local government units in dealing with the crisis brought about by the coronavirus disease 2019 (Covid-19).

The Inter-Agency Task Force (IATF) for the Management of Emerging Infectious Diseases declared the Province of Cebu along with the cities of Mandaue and Lapu-Lapu will be placed under general community quarantine (GCQ) from May 16 to May 31. Cebu City will be under a modified enhanced community quarantine (ECQ) along with the National Capital Region and Laguna Province on the same period.

However, the three cities' mayors—Edgardo Labella (Cebu), Jonas Cortes (Mandaue) and Junard Chan (Lapu-Lapu)—issued a signed statement, saying they all agreed that Cebu’s three densely populated cities must remain under ECQ due to the growing number of Covid-19 cases in their jurisdictions.

Out of the 14,747 individuals who got tested, Loreche said 201 need to undergo swab testing which will be used for the real-time polymerase chain reaction (RT-PCR) tests.

Antibodies were detected in 201 samples, and these could mean exposure to a virus but not necessarily the Sars-Cov-2, the virus that causes Covid-19.

While waiting for the RT-PCR test results, the 201 individuals need to isolate themselves.

Loreche said the movers behind the PBB were considering to extend the rapid mass testing. The health workers, she said, may revisit the barangays where there was a low turnout of test takers.

If the mass testing will be extended, Loreche said they will try to reach 70 percent of the three cities' total target.

Loreche encouraged the public to participate in the mass testing as the results will be used in guiding the tri-cities' future actions in dealing with the crisis brought about by the Covid-19.

During the media briefing, Loreche cited the low case fatality rate (CFR) in Cebu City despite having the highest number of Covid-19 cases in the country.

Loreche said the May 12 data of Cebu City’s cases showed that the city’s CFR was at 0.78 percent only. The national average of CFR was at 6.6 percent on that day.

A total of 1,404 residents took the two-day rapid testing in Barangay Paknaan, Mandaue City on May 12-13, or 68.15 percent of the 2,060 target. Only 500 residents showed up on the first day. However, the number grew on the second day with 904, according to Paknaan Barangay Captain Malaquias Soco.

The May 12-13 testing in Lapu-Lapu City saw several residents who took the tests.