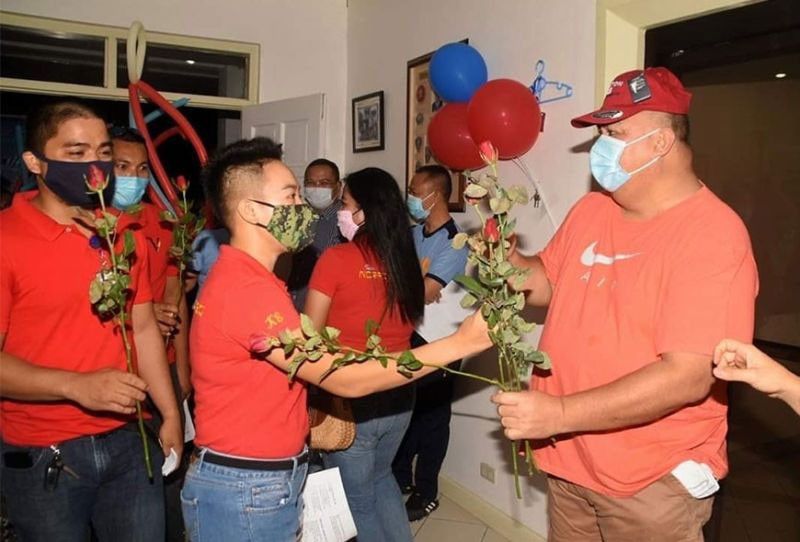 This is to ensure fairness and balance between protecting public interest and preventing demoralization among the police officers involved, said IAS inspector general Alfegar Triambulo.

Sinas or any of the policemen involved will not be relieved from their posts, as is usually done to ensure an impartial investigation.

Triambulo said they will look into two things: how to correct the mistakes that were committed to avoid similar incidents from happening again, and the individual liability of the persons involved.

He targets to submit a report by next week.

For now, he said they will focus on correcting the mistakes and ensuring that these are not repeated.

Sinas drew flak after photos of his birthday celebration on Friday, May 8 were posted on the NCRPO’s Facebook account.

The photos showed Sinas receiving roses and being serenaded by his subordinates who threw the surprise event for him despite the prohibition on mass gatherings and the rule on social distancing.

In a television interview on Thursday, May 14, Sinas said his subordinates surprised him with a traditional mañanita before dawn Friday at his quarters in Camp Bagong Diwa in Taguig City.

Sinas noted that during the event, he kept on reminding his people to observe quarantine protocols particularly the wearing of face masks and observance of social distancing to prevent the spread of the novel coronavirus.

He said he immediately instructed his men to leave and prepare for the conduct of relief operation early that morning, which was still part of his birthday celebration.

Sinas said he believed they did not violate any of the quarantine protocols.

Sinas said they are preparing the documents being asked by the IAS for the conduct of investigation including his affidavit on what really happened as well as the names of the individuals present in the event.

He said they were also waiting for the investigation of the National Bureau of Investigation (NBI) which was tasked to look into the criminal liability of the men in uniform involved.

The IAS investigation focuses on the administrative liability of the policemen.

Sinas brushed aside criticism of double standards in the enforcement of quarantine protocols.

The PNP is the government’s lead implementing agency of the quarantine protocols.

As of May 13, a total of 171,257 individuals have been arrested for violating quarantine rules particularly on curfew hours, wearing of face mask, liquor ban, and ban on mass gatherings such as illegal cockfighting and gambling.

A former army soldier was killed by a policeman after a confrontation over the former’s violation of ECQ rules in Quezon City.

A barangay captain was asked by the Department of the Interior and Local Government to explain why she organized a parade to honor health workers despite the ban on mass gatherings.

A foreigner was charged after an altercation with a policeman who was enforcing the rule on face masks in a subdivision in Makati.

Metro Manila has been on community quarantine since March 15 as a measure to slow the spread of the highly infectious novel coronavirus, which causes the coronavirus disease (Covid-19), a disease that has infected more than four million people and killed nearly 300,000 worldwide. (SunStar Philippines)