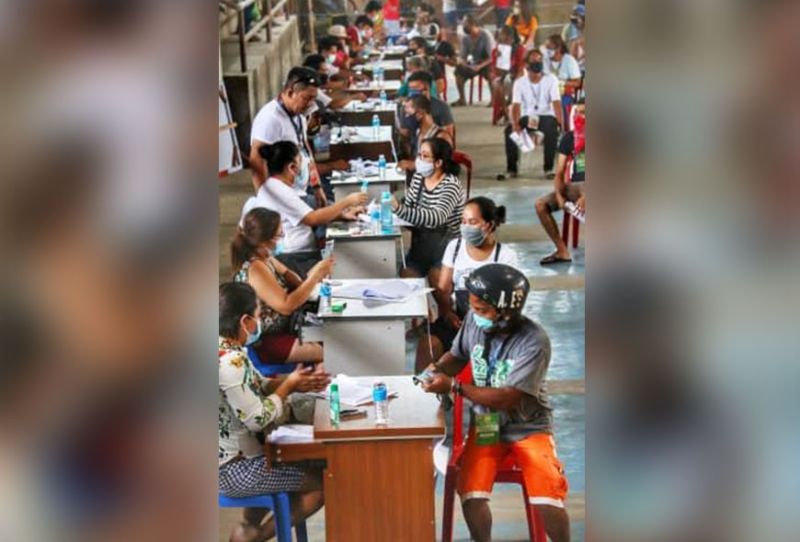 SAP DISTRIBUTION. Residents of Barangay Guadalupe, Cebu City, line up to receive their P6,000 financial assistance from government’s Social Amelioration Program (SAP). On Thursday, May 14, 2020 the Department of the Interior and Local Government (DILG) ordered 43 local government units nationwide, including five in Central Visayas, to explain why they should not be held liable for their poor performance in the SAP distribution. (Sunstar Photo / Amper Campaña)

FOR allegedly committing infractions in the distribution of government’s cash aid under its Social Amelioration Program (SAP), five local government units (LGUs) in Central Visayas will be issued show cause orders by the Department of the Interior and Local Government (DILG).

The names of the localities that failed the SAP mark have yet to be released by the DILG; however, a list released by the Department of Social Welfare and Development (DSWD) earlier this week showed 25 LGUs in Central Visayas, most of them in Cebu, had yet to complete the emergency cash distribution.

Eduardo Año, DILG secretary, said local chief executives of 43 LGUs, which include five from Central Visayas, will be made to explain their “poor performance” in the distribution of the emergency cash subsidy to qualified low-income families despite two deadline extensions given by the DILG.

The DILG 7 has yet to receive the list of LGUs in Central Visayas who are included in Año’s show cause order.

"We have yet to receive guidance and official communication from our central office on the next steps to be taken," Michael Braga, DILG 7 information officer, said.

"We submitted a report on the accomplishment of the LGUs, including those with 79 percent and below performance rate. Some of these LGUs had sent their justification to the head officer, and were assessed,” he added.

Braga said should the LGUs’ explanations be deemed unacceptable by the DILG after a thorough evaluation, administrative charges will be filed against them.

Based on data from the DSWD released on Monday, May 11, the LGUs in Cebu that failed to comply with the May 10 SAP distribution deadline are the cities of Cebu, Mandaue, Lapu-Lapu, Talisay, Toledo, Bogo and Carcar, and the towns of Pinamungajan, Badian, Dalaguete, Consolacion, Balamban, Tabogon, Sogod, Alcantara, Compostela, Tuburan, San Fernando, and Minglanilla.

In Bohol, Tagbilaran, Bien Unido, Loon and Maribojoc had yet to complete the SAP distribution, as well as Dumaguete and Guihulngan in Negros Oriental.

Republic Act 11469 (the Bayanihan to Heal as One Act) which instituted the SAP aims to mitigate the effects of the crisis brought about by the coronavirus disease 2019 (Covid-19).

The first deadline set by the DILG was last April 30. It was moved to May 7 and then moved again to May 10.

DSWD 7 Assistant Regional Director Shalaine Lucero, in an earlier interview, said only 940,648 household beneficiaries out of the total 1,058,075 families in the region received the cash aid as of noon, Wednesday, May 13.

The total disbursement for the government subsidy recipients has reached P5.6 billion or 89 percent of the entire P6.3 billion SAP allocation for the region.

“What we did was to assess the different LGUs who have not completed their distribution and told them that if they wanted to extend, they should inform the DILG,” Lucero told SunStar Cebu in Cebuano.

Lucero said they are giving the LGUs until Friday this week to deliver the remaining SAP funds to qualified beneficiaries.

Should the LGUs fail to do so after Friday, the DSWD 7 will demand the return of the unutilized funds, Lucero said.