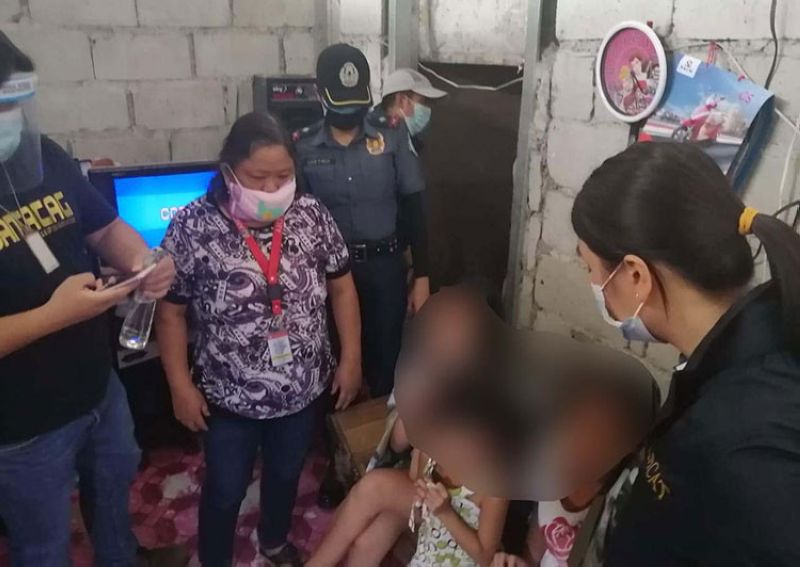 ANGELES, Pampanga -- A 34-year-old female was arrested while three children were rescued from online sexual exploitation Thursday, May 14, in this city in Central Luzon.

Two of the children -- ages 14 and six years old -- are biological daughters of the arrested suspect. The other one, an 11-year-old girl, is the suspect’s step-daughter who was left in her care.

All three minors are now undergoing affidavit taking and processing with the help of the Department of Social Welfare and Development (DSWD) and the local government unit social worker. They will be put on quarantine and will be tested for coronavirus disease (Covid-19) by the shelter’s physician.

The operation that led to the arrest of the suspect and the victims' rescued was conducted by the Philippine National Police-Women and Children Protection Center (PNP-WCPC) and the National Bureau of Investigation Anti-Human Trafficking Division (NBI-AHTRAD) as a result of their continued partnership in the Philippine Internet Crimes Against Children Center (Picacc).

The victims were allegedly forced to perform sexual acts on webcam for paying customers, referred to as online sexual exploitation of children (Osec).

The suspect will be charged for violating the Anti-Trafficking in Persons Act or Republic Act (RA) 9208 (as amended by RA 10364), which comes with a maximum penalty of life imprisonment and a fine of P2 million to P5 million.

“The NBI is fully dedicated to serve the call of justice wherever this may lead us. Today’s operation rescued three children in Region 3, proof that we will brave the distance wherever there are perpetrators abusing minors online,” said lawyer Janet Francisco of NBI-AHTRAD.

“Even with inclement weather warnings, extended community quarantines and physical distance of the crime scene, our gallant law enforcers will still do everything in their power to rescue the most vulnerable children from online sexual exploitation,” said Police Brigadier General Alessandro Abella, referring to the joint efforts of the team that carried out the arrest under unfavorable conditions.

“Today, we rescued three girls from the clutches of a person whom was supposed to care for them. I am deeply saddened by this fact but also hopeful that we were able to rescue them despite the rampant spread of Covid-19. The online sexual exploitation of children is similar to the disease because it is hidden and also widespread,” said NBI officer-in-charge Director Eric Distor.

“I am just thankful to our personnel that we were able to conduct the operation and carry out all modes to arrest the suspect before the storm hits the country. With Osec operations, timing is always essential and the path to justice is a road we are willing to take,” said Police Colonel Sheila Portento.

The case build up for the arrest started on March 18, 2020 when the Australian Federal Police in Manila facilitated a referral to the Picacc where the Operations Coordination Group (OCG) accepted the referral for joint investigation between the NBI-AHTRAD (lead) and the PNP-WCPC.

The Picacc, a model for an enhanced global response against Osec, is a cooperation among local and international law enforcement, namely, the PNP-WCPC, the NBI-AHTRAD, the Australian Federal Police, and the United Kingdom National Crime Agency (UK NCA), in partnership with non-government organization, International Justice Mission (IJM).

“Information from an Australian Federal Police operation in Sydney was passed to the PNP and NBI, who worked incredibly hard to identify a potential offender and rescue these children,” he added.

David Cater, UK NCA regional manager, said, “The NCA are working hard to ensure that our support to Philippines partners is not adversely affected by the impact of the Covid-19 environment. We are delighted to see that the combined efforts of all the Picacc partners have once again achieved a successful result in safeguarding 3 more children. We salute the excellent work of PNP and NBI and their determination to continue the fight against OSEC in this most challenging time.”

"This operation proves that our laws are being effectively enforced to protect the vulnerable even in this time of community quarantine. The current challenges brought about by the pandemic shall not diminish our commitment to support our law enforcement partners to rescue children from online sexual exploitation and arrest their abusers. We commend our government and non-government partners as we see the intensifying efforts against OSEC even during the lockdown. The number of children rescued are rapidly increasing each week. For us, these are not just numbers but real lives on their way to restoration and healing,” said lawyer Rey Bicol, Manila Field Office director of International Justice Mission.