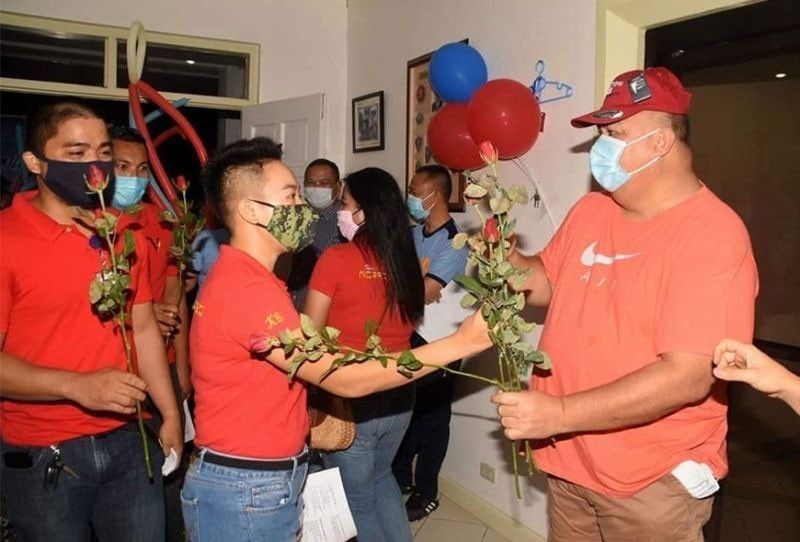 CHARGES were filed against 19 police officers who were found violating quarantine protocol with the holding of a birthday celebration despite the prohibition on mass gatherings.

The charges were filed against the following:

In its complaint, the PNP-IAS said the 19 police officers were among those who gathered at around 5 a.m. of May 8, 2020 at the quarters of Sinas in Camp Bagong Diwa to celebrate the latter’s birthday.

The policemen were found to have violated City Ordinance No. 12 of Taguig City, which requires the wearing of masks in public, and Republic Act 11332, or the Mandatory Reporting of Notifiable Diseases and Health Events of Public Health Concern Act.

Photographs uploaded on the NCRPO Facebook page showed that the officers did not wear masks and did not observe social distancing in violation of enhanced community quarantine (ECQ) protocol, the complaint said.

Sinas was bashed on social media after photos of the mañanita held Friday, May 8, were uploaded on the NCRPO’s Facebook account.

In these photos, Sinas was seen receiving roses and blowing birthday candles while his subordinates sang a birthday song for him.

The celebration was done in Sinas’ quarters in Camp Bagong Diwa in Taguig City despite the prohibition on mass gatherings.

The photos were deleted after the officers were bashed online for violating laws that they were supposed to enforce.

The entire Metro Manila is still under ECQ as a measure to delay the spread of the novel coronavirus, which causes the coronavirus disease.

The police have been strictly enforcing ECQ protocol such as social distancing and wearing of masks, leading to some violent altercations with violators.

In Quezon City, a former Army soldier was gunned down by a policeman for alleged violation of ECQ rules.

In Makati City, a policeman who was verbally attacked by a foreigner manhandled the latter as he tried to make an arrest.

“At present, the regional director of the NCRPO Brigadier Gen. Debold Sinas will remain in his position while the investigation is ongoing. Let us wait for the filing of charges. For now, there is no movement in the top officials of the NCRPO,” he said in a mix of Tagalog and English.

Meanwhile, the chief of the Police Regional Office (PRO) 7 has urged the public to reserve their judgment against Sinas.

Police Brigadier General Albert Ignatius Ferro had previously worked with General Sinas in NCRPO where he was deputy regional director for operations then.

“Let the course of the investigation proceed. I think a person should not be crucified unless the necessary due process is given to him,” Ferro said.

One of Sinas’s accomplishments during his stint as PRO 7 director was the confiscation of over P1 billion worth of illegal drugs in 16 months.

He also spearheaded the operation in Negros Oriental which led to the arrest of several members of the New People’s Army.

“We should give due credence to the good things that he has done for Region 7 and NCRPO. But again, we should respect the decision of our authorities, the higher authorities to conduct investigation,” Ferro said.

“During this time, we should be united. Let us not find fault. If we want to weather this crisis, we should be compassionate, kind and not crucify somebody who has done a lot of good things in Region 7 and NCRPO,” he added. (AYB, CBQ, SunStar Philippines)