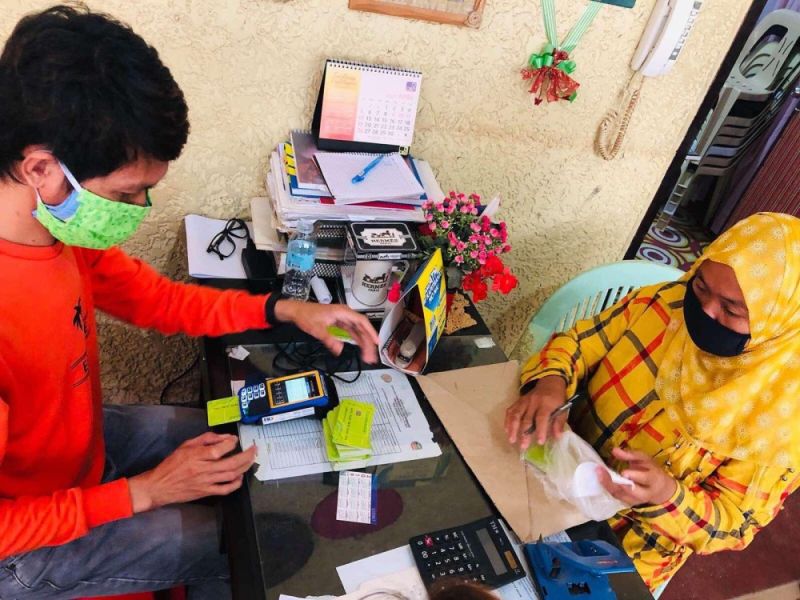 CITY OF SAN FERNANDO -- Small business owners in far-flung provinces in the Philippines continue to provide essential services in this pandemic. Grocery stores, in particular, often serve as access points for banking services in hard-to-reach areas.

It’s for this reason that BDO Unibank, Inc. launched Cash Agad, a service that allows partner agents to perform banking transactions such as withdrawal and balance inquiry using a point-of-sale (POS) terminal. Cash Agad is the easiest, fastest, and safest way to withdraw in areas where there are no bank branches and ATMs.

Hadiya Caril is a small business owner in Sirawai municipality in Zamboanga Del Norte and her grocery store is unknown to most people outside her community. Even so, she is performing tasks befitting a frontliner or essential worker during this pandemic, quietly and without fanfare. Caril’s Ephan grocery store is one of Sirawai’s sources of help during these hard times. This is because Caril is the residents’ link to much-needed cash that helps them access their essential needs. Caril has been a Cash Agad partner agent since February 2020.

One of the far-flung areas of the Philippines, Sirawai is underserved by banks and its residents find it challenging to travel many kilometers just to find an ATM. This is why it was chosen as a site for Cash Agad, designed as a solution for financial inclusion by BDO, the Philippines’ largest bank network.

According to Caril, the beneficiaries of the government's 4Ps (a cash amelioration program) and indigenous people (IPs) are especially grateful as Cash Agad is available in the grocery store. Since her customers now find it difficult to travel around because of the lockdown and checkpoints, she is going out of her way to provide them with cash: instead of having 4Ps beneficiaries transact at her grocery store for Cash Agad, she works with the 4Ps leader to encash the benefits and bring these to the homes of the recipients.

This process not only helps keep more people in home quarantine to reduce disease transmission but also lessens crowding at Caril’s grocery store, making it easier to maintain physical distancing whether customers are queuing to buy supplies or for Cash Agad transactions.

Caril’s experience is not unique. Other distant communities are reliant on Cash Agad partners like her especially during this pandemic.

For Cash Agad partner agent Luvilyn Baui, owner of Luvie’s General Merchandise in Santo Tomas, Isabela, the value and importance of her role in their community makes her own sacrifices worth it. Instead of her townmates traveling to a bank or ATM several towns away, she’s the one who makes the trip so she can bring cash over to her community.

Fortunately, both barangay officials and the local police have been helpful to her. They assist her in finding reliable and secure transport to go to another town or municipality to get cash that they then bring back to San Roque. This is what is distributed to those availing of Cash Agad withdrawals. Baui said the barangay and police also help in providing security and order including physical distancing to these transactions at her store.

The service that Cash Agad partner agents provide is made even more effective and far-reaching when it receives the support of the local governments. One example is what’s happening now in Metro Naga, one of Bicol’s major urban centers.

Recently, New Jeruz Minimart, Krystal Cates Store, and other Cash Agad partner agents in the area received the official and full support of their LGUs, thanks to coordination between local officials and BDO in the area. As a result of such coordination, the Cash Agad service has become part of official pandemic relief programs in a few cities in Metro Naga. The official rollout happened early April and was announced on Facebook.

Most ATMs in the province are located in Naga City, which is the center of business in Metro Naga (which consists of 12 other neighboring municipalities). Residents of neighboring towns had to all go there just to make ATM and other banking transactions. Unfortunately, because of stricter border control, only 10 persons from a municipality may enter Naga City at any given time, even for banking transactions. But with Cash Agad, this is no longer the situation for those living in the areas that have such service.

According to Bob De Vera, branch head of BDO Naga - San Francisco branch, it was the initiative of Naga City Mayor Nelson Legacion, who heads the Metro Naga Development Council, that led to the deployment of Cash Agad service in the municipalities of Camaligan, Gainza, Minalabac, and Milaor—towns which do not have any ATMs. Cash Agad was also very useful in the City of Naga, specifically in Barangay Calauag, which was placed under lockdown for almost two weeks after reporting COVID-19 cases.

De Vera and BDO Bicol Area Head Jovi Alvarez explained how the BDO Cash Agad service works and held a briefing at the IMT Command Center. They both demonstrated the proper use of Point-of Sale (POS) machines that accept ATM cards issued by any bank in the country for various transactions including withdrawals and balance inquiries. Depending on the needs of communities for each city or municipality, there are designated hours for transacting at Cash Agad partner agents to comply with the requirements of the community quarantines per area.

“The advantages of coordinating the Cash Agad service with local governments are obvious and immediately felt by members of each community. With such coordination, we balance the needs of the people with the requirements of the quarantine situation. Both are important, obviously. The quarantine is in place to protect people’s health, especially the vulnerable ones like the elderly and those with pre-existing health conditions. Still, people need to go out to get food and other essential supplies--and the only way they can buy those essentials is to first get cash. This is where Cash Agad comes in: it helps make cash available closer to the community and the LGUs provide order through scheduling and physical distancing,” explained de Vera.

As everyone adjusts to the so-called new normal in our everyday lives, the experience of Cash Agad partner agents, BDO executives like De Vera, and local government officials in Metro Naga show us that even a global catastrophe like this pandemic can be managed where it matters most: the grassroots and community level where we see true bayanihan, kindness, hope, and resilience. That’s what will help us not only survive but overcome this pandemic. (PR)