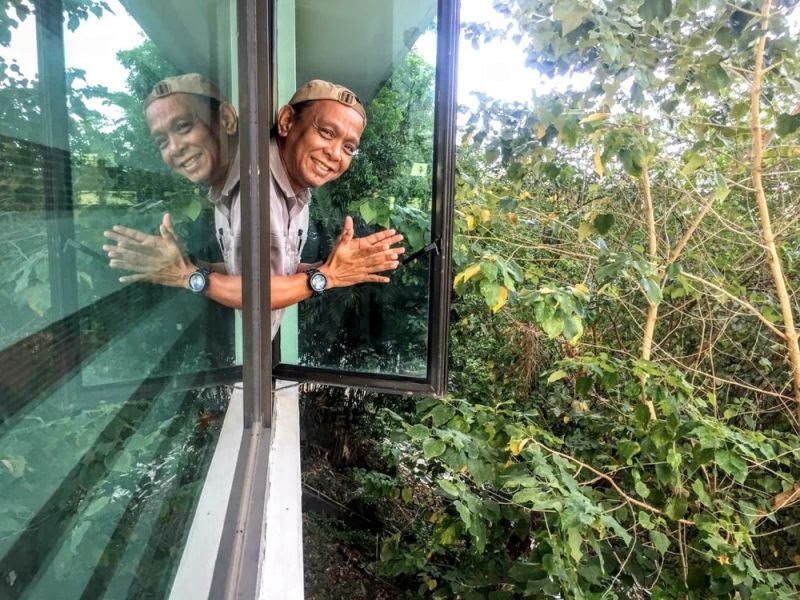 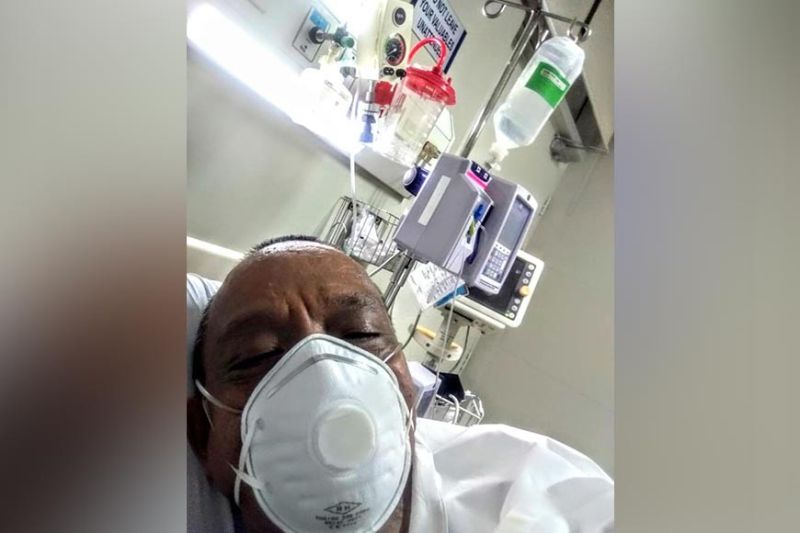 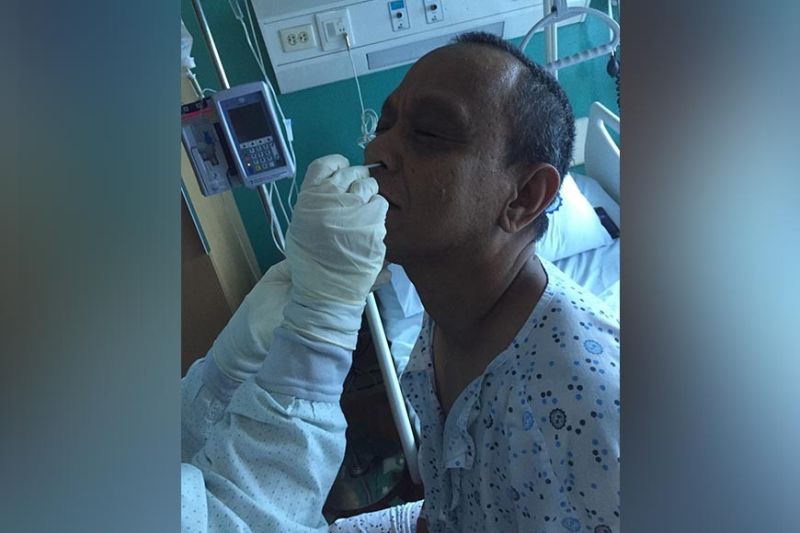 DAVAO. He describes the oropharynx and nasal cavity swabbing as nasty, and a patient has to undergo that over and over again until he tests negative twice. (Contributed photo) 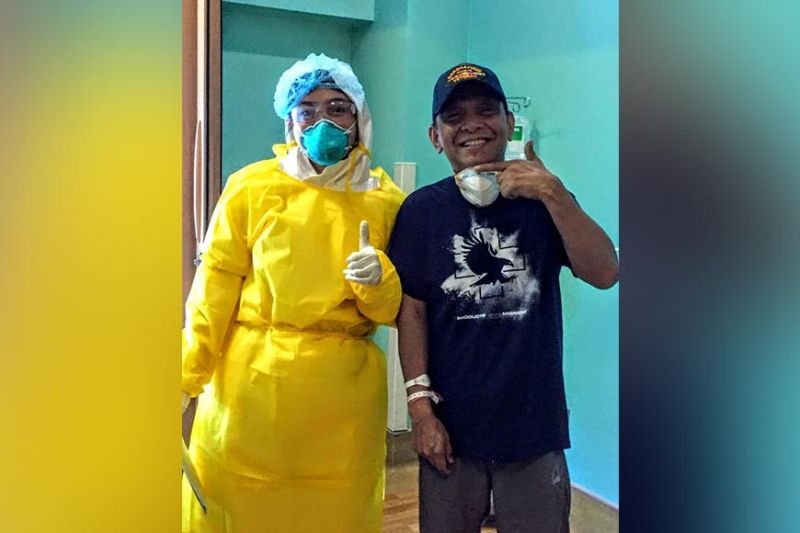 DOC Ted is among the most high-profile doctors who has been leading medical rescue missions in major disaster areas even outside the country. He became Covid-19 patient number PH-1827 and lived to tell the sufferings such that even a physically fit medical rescue doctor like him was already prepared to die. With God, no family.

A seasoned mountaineer and the doctor of the Philippine Everest Team, Doc Ted whose real name is Teofredo Esguerra, originally from Bansalan, Davao del Sur, was the last person you’d think would succumb to a virus. He did and barely survived it. As if the virus knew they found a host who’d give a good fight, Doc Ted got the meanest dose, name it, Doc got it. The cykotine storm, dry cough that made his head seem to burst, blood clots that showed in very high readings in D-Dimer tests administered, body malaise, diarrhea, loss of sense of smell, and a metallic taste in the mouth that all took their sweet time to go away.

His battle with the virus is a warning to all: This disease is no joke and it can wait in ambush from asymptomatic patients. Doc Ted got the virus from his wife, a government doctor in the frontlines of the Covid-19 fight, whom he was driving to and from work every day while he himself worked from home. Energy Development Corporation (EDC), where he works, was very particular about the virus and thus sent all employees to work from home in the early part of the pandemic. The virus was waiting at home.

His wife was asymptomatic all throughout. From pre-confinement, during confinement, and the post-confinement 14-day quarantine period. Had Doc Ted not fallen ill, she would not have suspected she had it.

“She never showed any cough, fever, diarrhea, etc. she was detected positive for Covid on April 2 and was confined on April 3. Preceding that, she was one of the asymptomatic entities in the population who can contaminate others. That’s how dangerous she was,” he said. Luckily, all their brood – two boys aged 21 and 15, and two girls aged 16 and 13, were spared the virus.

Indeed, the most regular-looking person you mingle with can be a carrier and it’s up to the virus to manifest the worst or spare you to become a deadly silent carrier.

Being a medical doctor, he is familiar with the tests and laboratory procedures that needed to be done, but he admits that one of the most difficult parts is in realizing you’re down with something that has no definite cure at the moment.

“It all seemed like experimental for me. I underwent blood extraction after another to test as to why the meds given to me were not working. Initially, I took two oral medicines and one intravenously,” he said. The confirmation that he has the virus came on March 29 after he felt body malaise like nothing he has felt in his life evening of March 24.

“It was my first time to feel that gnawing pain which is more pronounced when my body parts touch the bed. I kept on turning left and right. I was somehow relieved when I slept in a prone position. Then dry cough and slight fever came slowly,” he said.

The worst was the dry cough, which was "very agonizing" he wanted to die right there and then.

“My head was bursting in pain. They hooked me to oxygen to somehow recover.”

And it just came on and on barely giving him time to breathe.

As if the suffering is not enough, there is the judgmental public to deal with. It felt like he was a prisoner being sent to the gallows when a government ambulance arrived to fetch him for confinement at the St. Luke’s Hospital in Global City with neighbors watching from afar.

“At St. Luke’s, I was initially admitted to the ER where I stayed for five days. Those were the worst moments of my life,” he said as Covid-19 patients are not allowed to be in contact with anyone outside those medical frontliners attending to them. No family nor moral support.

The feeling just got worse when he learned that his children, who were left at home with a househelp were being discriminated against by the neighborhood. Even their garbage were not being loaded onto the collection trucks, he said, as neighbors were afraid to touch anything that came from their house. But goodness prevailed when co-volunteers in rescue took over and helped the children with their household needs – from garbage to food – as the children and the helper were not allowed to leave the house. A barangay kagawad whom he identified as Joy Dabucol offered to do the marketing for the household as the Esguerra couple were both confined.

Doc Ted finally tested negative twice and was discharged after a 20-day confinement. He has completed his 14-day post-confinement quarantine and returned to regular community

“I got lost in the seemingly NORMAL yet hodge-podge, mundane hemisphere... Until Covid-19 brought me down into isolation. There, I FOUND myself. Once healed, I believe I cannot go back to that NORMAL hemisphere since that normal was actually the problem. Lost yet FOUND,” Doc Ted wrote on April 16, two days before being discharged from the hospital.