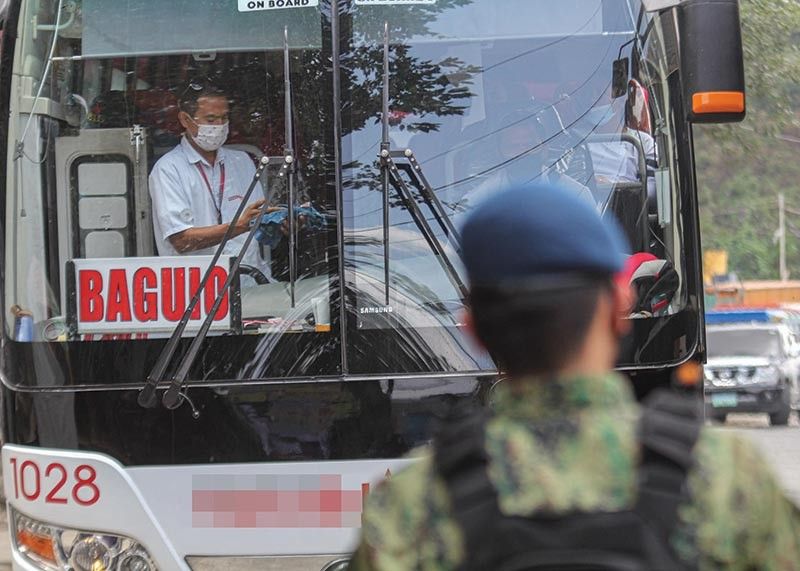 BAGUIO. Even with the easing of travel in the city, provincial bound buses to other parts of Luzon are not yet allowed to operate while those plying the Mountain Province, Kalinga, and Apayao routes are still being studied by the city government if fit for operation. (Photo by Jean Nicole Cortes)

MILLIONS of revenue and opportunity were lost with unemployment spiking in the Cordillera region.

The Regional Development Council’s initial report from line agencies and offices show staggering figures which will be finalized to assess the region’s loss from the two months enhanced community quarantine (ECQ) stopping work and operation of business.

Former Baguio City mayor Peter Rey Bautista, who now sits as a private sector representative of the Regional Development Council Committee (RDC) on infrastructure, said the city is only driven by two factors: education and tourism.

“Both are on hold and that is worth billions already to Baguio’s economy. Education and tourism make up 90+% of our economy,” said Bautista.

Economic loss estimates in the region are pegged at P2.5 billion representing the subsectors of social protection, health and education.

The estimated loss has been partially collated by the RDC based on the data in forgone income, higher operational costs as well as other unexpected expenses during the two-month period of ECQ.

Abra reportedly lost an estimated 1,037 tourist arrivals which are equivalent to P3.8 million in terms of spending pegged at P2500 a day per tourists while Apayao, expecting 1,588 arrivals are set to lose P5.9 million.

Benguet reported to have lost 26,143 tourists estimated to cost them P98 million in revenue while Baguio City estimates 230,388 arrivals which translate to an income of P995,276,160.

Tourists in the region are projected to spend at least two days in their province of choice and spend between P2,500 to P2,700 a day.

A total of 186 tourism establishments and 277 tour guides have been displaced in the region.

“Infra and transpo and food are all dependent with education and tourism. Even if we are in GCQ as long as there are no students or tourists, business in terms of infra, transport and food or restos won’t also fair well in this kind of lessened community quarantine conditions. Physical count of students and tourists can only make our economy move. The micro economy like jeeps, carinderias won’t pick up unless there are students, same with BAHAI and BAR/HRAB, as long as we close borders it won’t ever pick up,” Bautista, also the publisher of SunStar Baguio Incorporated said.

There are 58,576 affected vegetable and livestock farmers with 24,300 losing their jobs during the ECQ, equating to P9.543 million in lost income.

Productive sector losses for employment are seen with the 4,840 firms in the region with 68,152 employees.

There are at least 28 firms with 220 employees in agriculture, fishing and forestry, while the service industry has 4,364 firms and employs 54,639.

At least 13,239 employees have been affected by the pandemic which halted work for almost two months.

RDC noted there are now 11, 449 displaced informal workers assisted under the Tulong Panghanapbuhay sa Ating Disadvantaged/Displaced Workers (Tupad) program while 1,134 OFWs have been assisted under the Department of Labor and Employment’s (Dole)–Akap program.

According to the Department of Trade and Industry (DTI), there are 13,999 out of 24,716 micro small and medium scale enterprises in the entire region which temporarily closed shops while 651 cooperatives halted operations losing the unrealized sale of consumer goods and forgone income from loan penalties, rentals and bookings.

The infrastructure sector has also lost P3,625,749,547.51 seen in the subsectors of health facilities, transportation, communication and other infrastructure.

The losses are seen with the delayed implementation of projects, price escalation, lack of areas for triage, facilities converted to temporary treatment and monitoring areas.

Bautista said Baguio will have to re-do itself, a reboot or restructure of what the city wants to be, is important in the future.

“But we can’t be the same as before. Maybe agriculture can go hand in hand with education to boost Baguio. But unfortunately for all tourism establishments, it will suffer the most. Beaches won’t as much because it is free and nature’s gift, but for Baguio I’m doubtful to how we can come back as a destination. But very hopeful with education as it is a necessity and food production. Future thinking Agri Tourism will be the way to go if we continue to rely on tourism but definitely, Baguio will be on hard times even worse than the earthquake of 1990. At least during the earthquake, we were rock bottom and nowhere but up ahead. But for this, infrastructure is plenty. Hotels and restaurants all booming until this. So, what next is a big question mark for all those who have invested in restos and hotels/inns/transient etc. big challenges ahead for them.”