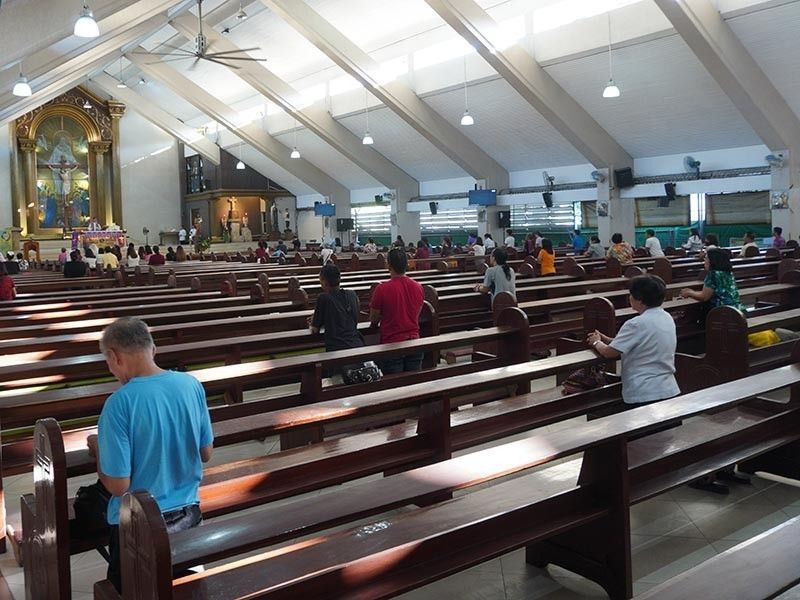 THE SITUATION. In an enhanced community quarantine or ECQ, under which Cebu City and Mandaue City are still governed until May 31, masses and other religious services continue to be prohibited.

In a general community quarantine or GCQ, to which Cebu Province and Lapu-Lapu City shifted starting May 16, also until the last day of this month, such religious gatherings are "limited to not more than 10 persons" per activity.

Had Cebu City and Mandaue City (and Lapu-Lapu City under their tri-city alliance) transitioned to modified enhanced community quarantine or MECQ, the religious gatherings would've been "limited to not more than five persons."

Last May 16, Malacañang said priests, imams, and other ministers may conduct "home religious services" but subject to health protocols and the limit of five persons per activity. That is supposed to be an exception to the general prohibition and limit on mass gatherings. The concession offers small comfort though to religious groups which -- under national government guidelines laid down in IATF's omnibus guidelines of May 15 -- are lumped with movie screenings, concerts, sporting events and other "entertainment activities and non-essential work gatherings."

The limit on number particularly dismays Catholic Church leaders who see it as "impractical."

Bishop Broderick Pabillo, Manila Archdiocese apostolic administrator, said on Sunday, May 17, the size and space of many churches would make the five or 10 persons limit "laughable" and "unconscionable." Imagine a mass attended by five to 10 persons at the Manila Cathedral or the Cebu Metropolitan Cathedral or even the Sto. Rosario Church in Cebu City, where masses used to be he held almost round the clock, until 8 p.m.

Complaining that the church has not been consulted by IATF, Bishop Pabillo said it could've used instead the one-to-two-meters distance between persons.

Apparently, IATF is not yet impressed by the health procedures that the Manila Archdiocese said it would adopt, including:

[1] Requiring face mask and temperature check for each devotee;

[2] Half-hour gaps between masses, to allow workers to disinfect pews, floor and other areas of the church;

[3] Fewer masses on Sundays and more services on weekdays and resetting the anticipated mass to 3 p.m. Saturdays;

[4] Limiting number of people, with seats, marked apart according to prescribed rules, and ban on using holy water in making the sign of the cross as one enters the church, touching and wiping religious figures, or holding hands or kissing and hugging in that part of the mass.

The Catholic Church has cooperated with the government in implementing the measures against the Covid-19 pandemic.

It has modified its sacraments and rituals, such as sprinkling ash on the head, instead of touching the face, on Ash Wednesday. It has closed church doors since the government ordered a lockdown, conducting instead masses and other services through television and internet. It has stormed the heavens with prayers, topped with "oratio imperata," the prayer for relief from distress or calamity.

In sum, it has submitted to the "draconian" measures imposed by authorities, particularly those that suspended church services, the major source of revenue for operations of parishes and archdioceses and the ultimate reflection of the church being the collective community of its members.

May not even try

And it would be sometime yet for religious activities, along with other community assemblies, to come close to the old routine.

From the initial stage in reopening, which is the GCQ or general quarantine, priests and bishops may be so turned off by the idea of having only 10 people in the church as they hold mass, they might not even try to reopen yet.

And the next stage, if LGUs still have to go through it, does not provide much improvement.

A modified ECQ limits attendance in church services to not more than five persons. A modified GCQ caps the number of churchgoers to "50 percent of the seating capacity" at the venue.

Bishop Pabillo said in his Facebook post of May 16: "This may be another way of saying, you do not have religious activities."

Watch how the authorities treat religious activities in their next resolution, circular or executive order. The bishop could be right.