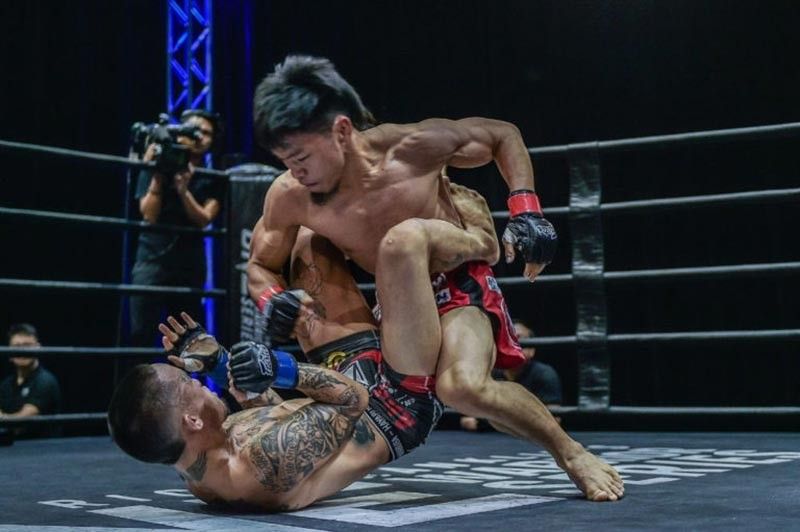 THUNDER KID RISING. In just a short time, Team Lakay’s Lito Adiwang with his explosive showmanship inside the ONE Championship cage has captivated audiences across the globe. (ONE Championship photo)

SETTING his sights for a possible shot at the world title, rising ONE Championship strawweight prospect Lito Adiwang is bracing for tougher training ahead of his career.

Adiwang of the famed Team Lakay is dubbed as one of the most exciting athletes in his division and with a knack for scoring highlight-reel finishes, and electrifying huge crowds with his fan-pleasing style, he has captivated audiences in his time inside the ONE Circle.

The ONE Warrior Series (OWS) product earned a six-figure contract to join the ONE Championship main roster after blowing away the competition in ONE Warrior Series, Rich Franklin’s reality television show, winning his first three encounters, two of them by knockout.

Adiwang has gone unbeaten in ONE so far, demolishing top talents Senzo Ikeda and Pongsiri Mitsatit since his global debut.

But while he undoubtedly possesses natural talent, Adiwang is quick to point out that training at Team Lakay has fortified his skill set.

“Training at Team Lakay is intense. I’m very fortunate to be working with a great group of guys who are not just talented and highly-skilled, but also close like family,” said Adiwang, adding “There are instances when we are really deep in training, and we let loose and forget to hold back. There’s the occasional heavy shot we land here and there, or sometimes we put each other in some painful submissions.”

Adiwang is quick to point that after a hard training, he and his brothers at Team Lakay make amends and say sorry to each other knowing that it’s all part of the game.

“But we’re all professionals, and we know it’s part of the game. We just say sorry and continue with no hard feelings. After all, we’re like brothers here,” he added.

If Adiwang keeps winning, he will eventually find himself on track for a shot at the world title too and he’s not ruling out a showdown with Team Lakay teammate Joshua Pacio, who holds the ONE Strawweight World Title.

He prefers to avoid it if necessary, and instead looks to take out any top contenders to boost his stock.

“My personal goal is to be known as one of the best fighters in the division. Of course, I want to eventually compete for a world title. It’s every athlete’s dream to become a world champion,” Adiwang said.

“While it will ultimately depend on ONE Championship, I still prefer not to face Joshua Pacio as much as possible. I want to avoid that. Instead, I want the top guys in the division. Dejdamrong Sor Amnuaysirichoke, Yoshitaka Naito, Alex Silva, Yosuke Saruta -- these are all great matchups for me and challenges I’m willing to face. I just want to face the best and prove myself,” added Adiwang.

He believes that by taking on the promotion’s best talents and former world champions, he will not only get the opportunity to raise his profile as one of the best in the world, but also gain valuable experience to further his career.

Adiwang also hopes ONE Championship would put together a strawweight tournament, just as they have in the past, for the flyweight and lightweight divisions.

“My plan is to keep taking on anyone they put in front of me and beat them. I’ll take any fight, no matter how short the notice. I’m always ready, always training, and always ready for action,” he asserted.

He said, “I want to fight as many times as I can this year,” he adds. “A tournament would accomplish that goal. I know right now, it’s tough with everything that’s going on. Everyone is fighting their own battles. We will get through this. As athletes though, we have to remain focused on our goals. We’re always training, even at home.”

One thing is certain, Adiwang isn’t taking his eyes off the prize. He’s looking for the biggest and best challenges, and says it’s not just the strawweights that should watch out.

“If Joshua still has the belt in the next couple of years, I have no issues moving up to flyweight to take on challenges there. There’s a lot of great talent in that division that I wouldn’t mind testing myself against. But we’ll cross the bridge when we get there,” he says.

Johnson is slated to face reigning ONE Flyweight World Champion Adriano Moraes sometime this year, and Adiwang has no qualms about potentially being first in line to face Johnson should he win the belt.

“That would be a dream come true for me. Demetrious Johnson is the best in the world right now, in my opinion. And I’ve dreamed of facing him since I started my career. Before, that was just an impossible dream. But now that he’s with ONE Championship, it’s closer to reality,” he concluded.