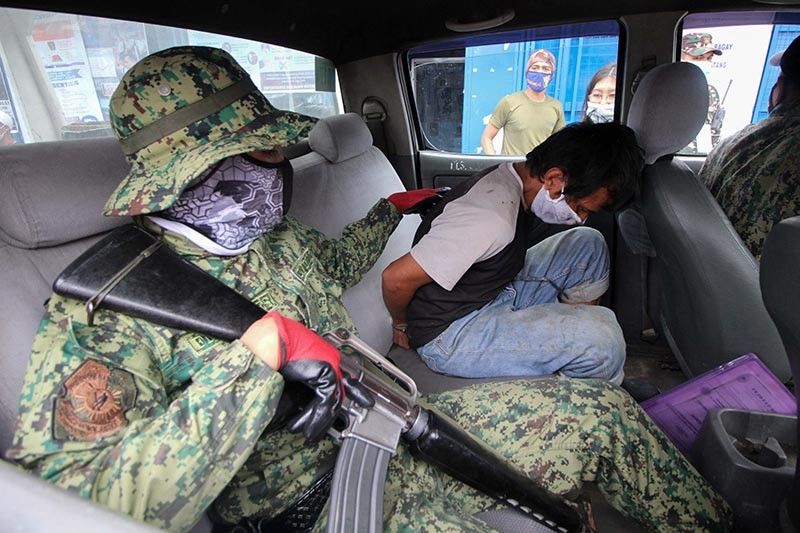 BAGUIO. Rogelio Fernandez is assisted by police from Itogon after he was nabbed Tuesday morning, May 19, 2020 for allegedly kidnapping three children. (Photo by Jean Nicole Cortes)

THREE children were rescued from their alleged abductor in Itogon, Benguet Tuesday morning, May 19.

Itogon Municipal Police Station (MPS) said lone suspect, Rogelio Fernandez, 48, single, a construction worker in the town was arrested now faces charges of kidnapping and violations of Republic Act 9262 or the Anti-Violence Against Women and their Children Act of 2004.

Relatives of the children aged seven and eight years old earlier posted photographs in social media of the three who went missing on Monday, May 18.

Major Rommel Sawatang, Itogon MPS chief, said the missing children were reported to police by their relatives and were last seen playing outside their house.

Sawatang added members of the Itogon MPS personnel, barangay officials and volunteers conducted a manhunt operation and were able to find the children and arrested the suspect in Sitio Tuwap, Gumatdang, Itogon.

According to police, the suspect kidnapped the three children after his employer failed to pay his salary, however, the children are not related to the suspect’s employer.

The three children are currently undergoing stress debriefing at the Municipal Social Welfare and Development Office.

Sawatang said the suspect also has a murder case in Baguio City.