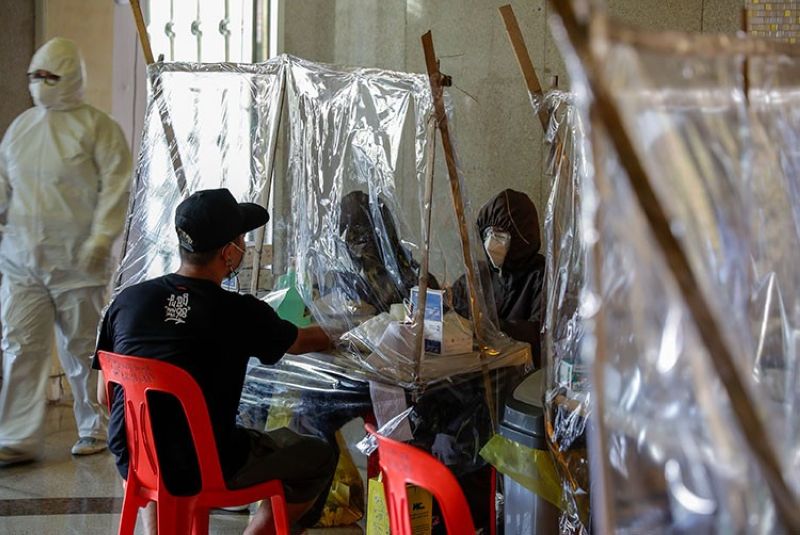 MANILA. Health workers conduct a random rapid testing for Covid-19 inside a columbarium at the Immaculate Conception Cathedral of Cubao complex in Manila, Philippines on Wednesday, May 20, 2020. (AP)

Also on Wednesday, DOH Secretary Francisco Duque III told the Senate that the country is experiencing the second wave of coronavirus disease (Covid-19) outbreak given that the first wave was in January, based on the analysis of epidemiologist John Wong.

As of 4 p.m. Wednesday, the Department of Health (DOH) said it has listed a total of 13,221 infections in the country.

There were five additional mortalities, raising the death toll to 842, and 89 other patients who have recovered from the coronavirus disease (Covid-19), bringing the total number of recoveries to 2,932.

Of the new cases, 150 were from the National Capital Region, 14 from Central Visayas and 115 from other regions..

Of the total, 9,447 are considered active cases.

This is the 10th consecutive day of cases increasing by at least 200 a day.

During the Senate committee of the whole hearing on the Covid-19 situation on Wednesday, Duque confirmed that the Philippines is on the second wave of outbreak.

The DOH first confirmed Covid-19 cases in the country on January 30, when a couple of Chinese nationals visiting from Wuhan, China fell ill and were admitted to the San Lazaro Hospital.

Read: Timeline: Covid-19 in the Philippines

Patient 2, a 44-year-old Chinese man, died on February 1 while Patient 1 was released and later allowed to go home after recovery.

Another Chinese woman, Patient 3, was announced on February 5.

For a month, no other cases were confirmed.

The DOH confirmed Patients 4 and 5 on March 6.

During the DOH virtual press conference Wednesday, Wong explained that a wave of an outbreak is characterized by a rise in cases followed by a decline.

He said the Philippines had a “very small wave” from January 30 to February 5, when the DOH confirmed Patients 1, 2 and 3.

The second wave began on March 6, with the announcement of new cases. This peaked on March 31, when the DOH reported 538 cases, the largest number of infections within a 24-hour period.

“We’re now in a trough, or the lower part of the second wave,” Wong said.

“What we want to avoid is, when we shift to GCQ, that we would have another peak, or several more peaks. So we would have to try to postpone the third or subsequent waves,” he added.

He said the cases could have gone higher than 500 per day had the government not imposed an enhanced community quarantine (ECQ).

“Fortunately, the cases started to go down and even though now we still have some small peaks and also drops in cases - we’re averaging 220 cases a day,” he said.

The epidemic curve flattened after the peak of 538 cases in one day, Wong said.

The epidemic curve is normally a bell-shaped curve. To flatten this, the numbers should plateau instead of shooting up to form a steep slope.

Wong said flattening the curve also means keeping the number of cases below the country’s health system capacity, which is measured in terms of hospital beds, isolation beds, ICU beds and mechanical ventilators.

“If we keep below that capacity, that horizontal line, then we can say we have flattened the curve. If we did not do any interventions, the line would have gone straight up and exceeded the health system capacity line,” he added.

Wong said not one region in the country is in danger in terms of critical care services utilization rate.

Nearly 20 percent, or one in five, of the 1,965 ventilators were in use. (MVI with a report from JTM/SunStsr Philippines)