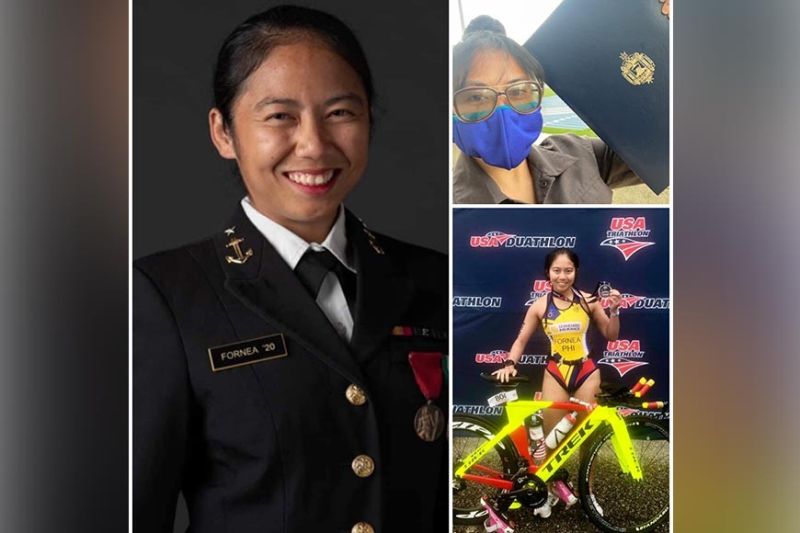 DAVAO. Mary Pauline Fornea of Davao City fulfills student role and military duties on weekdays while she competes in duathlon races during weekends as a Philippine Military Academy foreign schooling cadet at the United States Naval Academy where she recently graduated with honors with a Bachelor of Science Degree majoring in Naval Architecture and Marine Engineering and Robotics and Controls Engineering. (Pawie Fornea Facebook account)

That’s how the 26-year-old Dabawenya Mary Pauline “Pawie” Fornea, a 30th Southeast Asian (SEA) Games 2019 duathlon bronze medalist, described her five-year journey as a foreign schooling cadet of the Philippine Military Academy (PMA) to the United States Naval Academy (USNA) where she recently graduated with honors with a Bachelor of Science Degree majoring in Naval Architecture and Marine Engineering and Robotics and Controls Engineering.

Such dedication, hard work and discipline made her survive her cadetship with flying colors while also excelling in her sport.

Pawie qualified to the 2020 World Duathlon Championships in Netherlands after she landed among the top 10 percent of the 2019 USA Triahtlon Duathlon National Rankings, topping her own age group. She earned a distinction of Duathlon All-American from the USA Triathlon All-American.

Such a rare feat for an unassuming achiever who received her USNA diploma only donning an ukay-ukay polo jacket on May 9 in Annapolis, Maryland, USA.

The graduation ceremony of USNA class 2020 will be streamed live on May 22.

“I competed several duathlon races in the USA while prioritizing my jobs as a Filipino PMA foreign schooling cadet and USNA Cadet at USNA to prepare for SEA Games 2019. School and military duties on weekdays, travel and duathlon races on weekends,” she shared on her Facebook post.

In the interview, she said: “I feel blessed and accomplished na nakatulong po ako sa bayan, with the grace of God. I just achieved my long term goal that is to serve my country in my own way, and to inspire our youths to serve our country too, Ma’am especially in the Philippine Military Academy and Armed Forces of the Philippines.”

The majors she took at USNA, meanwhile, were the courses she chose in the Philippine Navy.

During her plebe year in the PMA, she was top four-five class and later nominated to be a foreign schooling cadet for the USNA. She underwent competitive written exams, interviews and physical tests with USA standard. Her performances were then evaluated against other cadets from different countries.

“USNA picked 17 cadets from all nominees across the globe. By the grace of God, I was included among the incoming international students for study and military training at USNA,” she reminisced.

The decorated swimmer graduated at the University of the Philippines (UP) Mindanao in 2013 then later trained as full time national athlete but she resigned in 2014 before entering the PMA in 2015.

She left for the US in the middle of her PMA cadet summer training in June 2016.

Pawie thanked Judes Echauz of Standard Insurance for supporting her sport and military career since 2014; her foster parents in the Philippines and in the USA for being her home away from home; her past coaches especially to late Arthur Compra and late marathon king Rafael Poliquit; and her current coaches Bernie Llentada and Karen Boyle for bringing out the best in her athletic capacities

“I am grateful to all of my senior officers, USNA and PMA upperclasmen, mistahs/classmates both in the Armed Forces of the Philippines and in the United States Navy for their all-out guidance and cheers,” she said.

“Because of him as my second father and my epitome of a military officer, I was able to survive the most rigorous cadetship-midshipman life. He is my biggest motivator throughout my cadet life because I really want to be like him and I’ve been dreaming and promised to be like him since 2014,” Pawie added.

She is currently in Manila and will proceed to PMA headquarters in Baguio City after her 14-day quarantine.