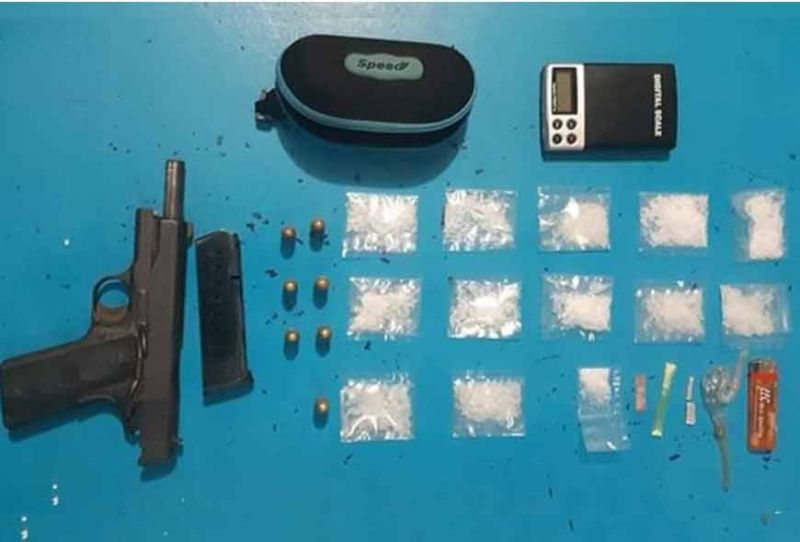 ZAMBOANGA. Joint marines and police operatives arrested Tuesday, May 19, Ruben Kalum in an anti-drug operation in Sitangkai, Tawi-Tawi. A photo handout shows the estimated P75,000 worth of illegal drugs and paraphernalia as well as a caliber .45 pistol with ammunition seized from the suspect. (SunStar Zamboanga)

JOINT Marines and police forces have arrested a drug personality and seized illegal drugs and a firearm in the province of Tawi-Tawi, the military said Wednesday, May 20.

Rojas said Kalum was arrested following receipt of report from concerned citizens that the suspect was sighted in Poblacion, Sitangkai.

He said recovered from Kalum were some P75,000 worth of suspected “shabu” (methamphetamine hydrochloride) packed in 13 heat-sealed plastic sachets, digital scale, a caliber .45 pistol with seven rounds ammunition, and illegal drug paraphernalia.

Rojas added that Kalum has a standing warrant of arrest for evasion of service sentence issued on October 18, 2010 by the court of Bongao, Tawi-Tawi.

The arrested suspect and the confiscated items were turned over to the Sitangkai Municipal Police Station for proper disposition. (SunStar Zamboanga)