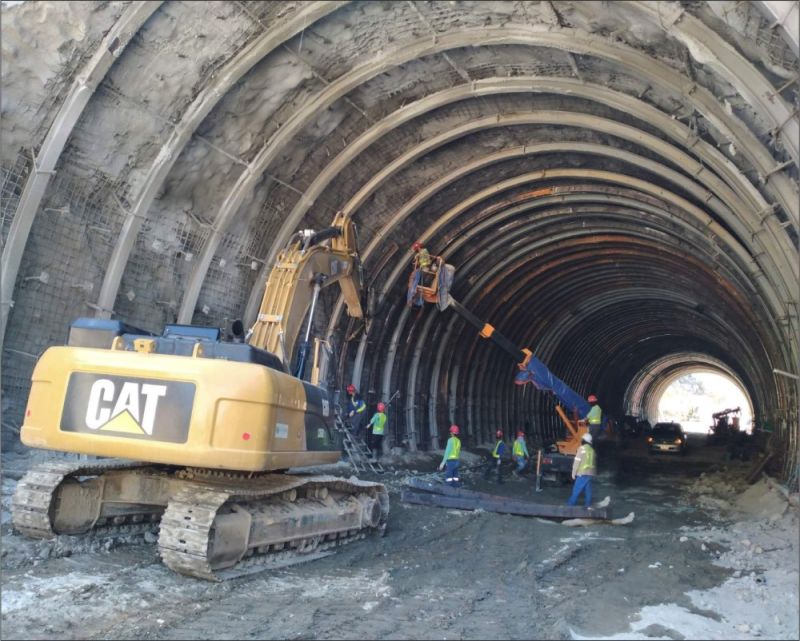 PAMPANGA. Construction works on the capacity expansion of the 8.2-kilometer Subic Freeport Expressway (SFEX), which includes a new tunnel, resumes after the North Luzon Expressway (NLEX) Corporation received approval from government regulators. The SFEX is aimed at improving traffic safety and reduce travel time to and from the Subic Bay Freeport Zone. (Contributed photo)

The tollway company and its contractors are taking all the necessary measures based on Inter-Agency Task Force on Emerging Diseases (IATF), Department of Health, Department of Labor and Employment, and Department of Public Works and Highways guidelines to promote the health and safety of workers while at the same time ensuring the continuity of projects.

These measures include rapid antibody testing of workers; strict observance of safety and hygiene protocols such as wearing of personal protective equipment and monitoring of temperature; compliance to physical distancing; provision of washing facilities at strategic locations; and regular disinfection of equipment and work area, among others.

“We have complied with the safety protocols laid out by the government for the implementation of infrastructure projects amid modified enhanced community quarantine,” NLEX Corporation President and General Manager Luigi Bautista said.

“With the acceleration of these projects, we can help the government in its aim to revitalize the economy despite the ongoing health crisis,” he added.

Construction of the remaining portion of the 2.6-km NLEX Harbor Link C3-R10 Section is now underway between the new Caloocan Interchange, C3 Road, Caloocan City to Radial Road 10, Navotas City. The project’s progress currently stands at 95 percent. It is seen as a crucial infrastructure that will help alleviate traffic congestion as it would cut travel time from NLEX to CAMANAVA from one hour to 10 minutes. Last February, NLEX Corporation opened the Malabon Exit of the Harbor Link project and has since eased travel for motorists and commuters in the area.

Works on the NLEX Connector, an 8-kilometer all elevated expressway, also resumed. This infrastructure project will traverse the new Caloocan Interchange, pass through España, and eventually link up with the Metro Manila Skyway Stage 3 in Sta. Mesa, Manila.

Also ongoing is the capacity expansion of the 8.2-kilometer Subic Freeport Expressway (SFEX) aimed at improving traffic safety and reduce travel time to and from the Subic Bay Freeport Zone. The civil works for SFEX Capacity Expansion Project, which is now 38 percent complete, include construction of two additional lanes, two new bridges, and a new tunnel.

Heavy maintenance of the 5-kilometer Candaba Viaduct is likewise in progress to restore the driving comfort of motorists. Emergency repairs are already ongoing underneath the bridge while the replacement of link slabs will be scheduled.

Meanwhile, the construction of additional lanes at Clark South Toll Plaza is also set to resume.

“Despite the challenging times, our team remains committed to accomplish our big-ticket projects and continue the 24/7 service to our customers and other stakeholders,” Bautista said.