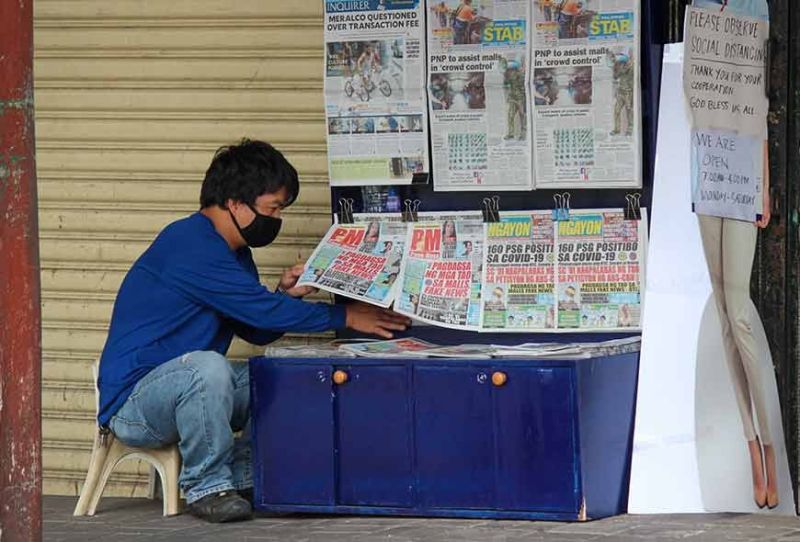 BAGUIO. A newspaperman waits for customers, the print industry is one of the many industries unable to operate during the enhanced community quarantine (ECQ). (Photo by Jean Nicole Cortes)

THE pandemic has crippled the media sector.

The lifeblood of any media outfit is advertising, and in the time of coronavirus disease (Covid-19), media became a non-essential need; making profits for outfits almost nil.

When advertising is low, each media outfit will scale down operation slowly and in effect, salaries, honoraria and commissions of media and media workers will go down.

Some news outfits may be forced to close down displacing workers.

There are 12 newspapers in the City of Baguio and the province of Benguet and there are only at least two which keep regular staff members paying for their benefits and having a legitimate employer – employee relationship, the rest are paid on a per piece basis.

There is only one private television company and two cable companies operating in the city and province comprising media and media workers in the broadcasting sector.

The remaining individuals are stingers for national outfits, in the city, all major television stations are represented, who work on a “no work, no pay scheme,” averaging at least P2,000 up a month in salary, depending on output.

There are 15 Radio stations [4 AM and 11 FM] in the city composed of regular employees and block timers.

Block timers are freelance journalists who pay the radio station time slot to air their shows which is also rooted to advertisements.

In the time of the pandemic, the Baguio Correspondents and Broadcasters Club Incorporated (BCBC) is at the forefront of helping members badly hit by the worldwide pandemic.

The BCBC, the longest running media organization in Baguio City and the Cordillera region, brings together members of the tri media both to improve the profession and help in nation building through responsible journalism.

Since its inception over 60 years ago, the BCBC has been a partner of the city and the region in delivering the news and information.

According to BCBC, before the ECQ, majority of the Baguio-Benguet media earn below P10,000 a month, falling short of the P350 daily minimum wage in the city.

The resolution was backed by the entire city council explaining that advertisements declined during the ECQ period and significantly decreased the income of all media outfits.

A dialogue with Mayor Benjamin Magalong, the BCBC reported there are 80 percent of members being paid per piece with starting pay pegged at P8,000.

Magalong pledged commitment to include media workers in the city’s stimulus package programs, taking a portion of the P200 million for the media.

BCBC is grateful for the aid in cash and in kind given by donors and supporters in the community which has enabled the media club to help the men and women in the frontlines delivering the news in this time when the truth has to be told.

BCBC partner newspapers, television stations, cable companies as well as radio stations have been working to bring the city the latest news, all day, every day, in these times where the need for information is great.

Cash sponsorships have totaled P239,000 on the process of being distributed as a first wave of cash aid and to bankroll an insurance for members in partnership with the Philippine Red Cross.

BCBC members stands close to 300 comprising of journalists in television, radio and print, who have not wavered to the call to serve the public despite the threat of infection.