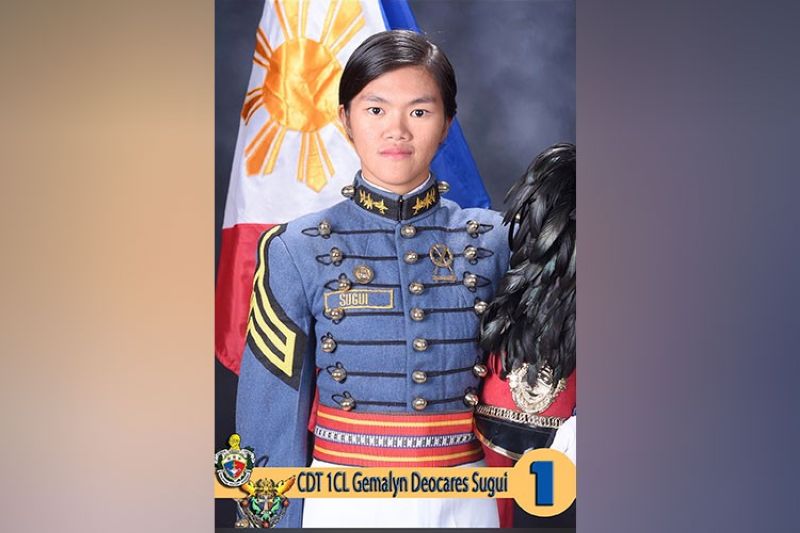 Cadet First Class Gemalyn Sugui, 25, bested 195 other graduates, becoming the sixth female cadet to have led the PMA graduating class since women were admitted to the academy in 1993.

As class valedictorian, she will receive the Presidential Saber, the Achievement Award for Academic Excellence, the Jusmag Award, the Philippine Army Saber, the Spanish Armed Forces Award, the Social Sciences Plaque, the Management Plaque, and the Rule of Law Award.

Other graduates in the top 10 are:

Sugui, who is set to join the Philippine Army, hails from Echague in Isabela. Her mother is a public school teacher while her father is a farmer.

She obtained a BS Management Economics degree at the University of Baguio before entering the PMA.

Sugui said that although the training at PMA was difficult, she never thought of quitting because this was among her dreams.

She said the academy taught her the value of family and time.

This year’s PMA graduation, which is set for Friday afternoon, May 22, is not open to the public, not even to the families of the graduating cadets due to the coronavirus disease (Covid-19) pandemic.

“I believe this is a necessary decision in order to safeguard the health and general well-being of the CCAFP and the whole PMA community. As a parent, I know how heartbreaking and disappointing that decision is, but we have to do what is best for all. Safety and health are paramount at all times,” said PMA Superintendent Allan Cusi.

Cusi said the graduates will be reporting straight to their services to augment forces at the front lines of the country’s Covid-19 response efforts. (SunStar Philippines)