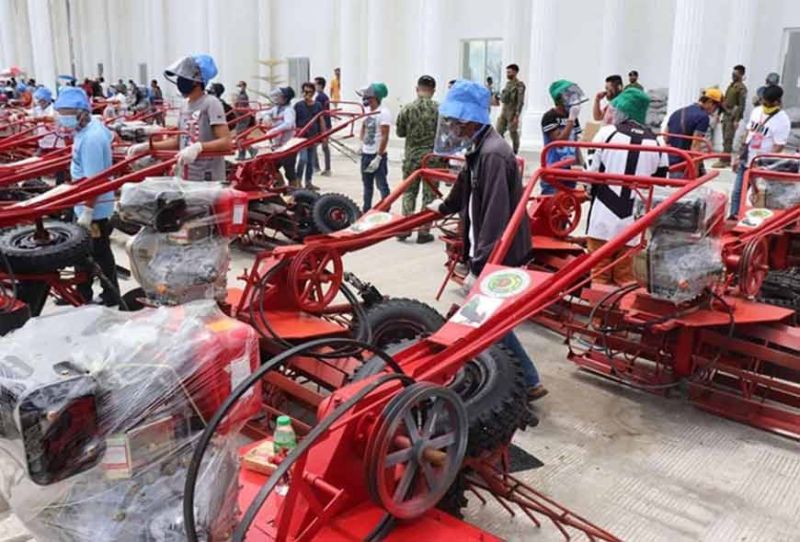 ZAMBOANGA. The Provincial Government of Maguindanao has provided livelihood assistance to 68 former members of the Daesh-inspired Bangsamoro Islamic Freedom Fighters (BIFFs). Photo handout shows the farm machinery and inputs the former BIFFs received in a ceremony Wednesday, May 20, at the provincial Capitol of Maguindanao. (SunStar Zamboanga)

The returnees received 68 units of farm machinery and input, such as kuliglig, tractors, fertilizers and vegetable seedlings, which were handed to them by Maguindanao Governor Bai Marian Sangki-Mangudadatu in a ceremony Wednesday, May 20, at the Provincial Capitol.

Colonel Joel Mamon, Army's 601st Infantry Brigade officer-in-charge, facilitated the turnover of livelihood assistance through collaboration with the Provincial Government that rallies its advocacy slogan, "Gobyernong may malasakit sa Maguindanao," for peace, security, and progress in the province.

"The brigade endeavors to provide a livelihood to the rebel returnees amid the economic setback experienced by the province due to the occurrence of the Covid-19 (coronavirus disease 2019) pandemic," Mamon said.

Mamon said the former BIFFs surrendered to the 7th and 33rd Infantry Battalions from January to April this year.

The distribution of livelihood aid on Wednesday, May 20, was the third time the Provincial Government of Maguindanao has extended livelihood assistance to former members of the BIFFs.

"We are fulfilling our commitment to help rebel returnees be reintegrated into the mainstream society and live a peaceful life with their families," Mangudadatu said.

"It is very fulfilling to live in peace and harmony and be a productive citizen and instrument of development. We call on the other rest of our brothers who are still contemplating to come out and take advantage of the livelihood programs implemented by the government," said Brigadier General Efren Baluyot, commander of the 1st Mechanized Infantry Brigade.

Meanwhile, Major General Diosdado Carreon, Joint Task Force Central commander, ensured the active intervention of the military in the capitulation and reintegration of former rebels in the area.

Lieutenant General Cirilito Sobejana, commander of the Western Mindanao Command, said, "The mutual cooperation only shows that the military and all other sectors are sincere in ensuring the accomplishment of the government's program for former rebels."

"Those who wish to cross the line will receive the sincere assistance of our troops on the ground," Sobejana added. (SunStar Zamboanga)