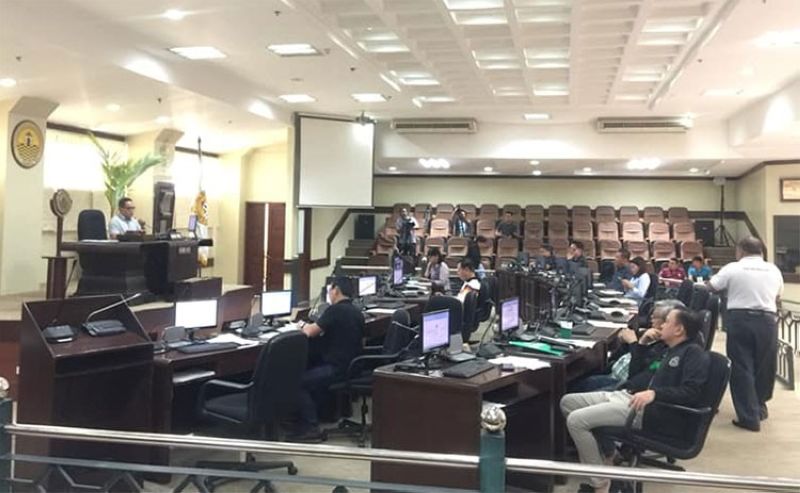 THE SITUATION. The Cebu City component of the tri-city Project Balik Buhay (PBB), which wages the campaign of mass testing for coronavirus, was never threatened by the minority BOPK's resolution to cut off funding.

The City Council last May 20 killed the resolution after Presiding Officer and Vice Mayor Mike Rama broke the 8-8 tie, carrying the day for the majority Partido Barug.

Had the resolution passed, it wouldn't have affected Cebu City's part in Project BB, a joint undertaking of the city with Mandaue City and Lapu Lapu City.

The reason: it was just a request, not a decision to cut off funding. The resolution resolved to "request" the mayor "not to charge the purchase of any rapid test kits to any public funds."

Even if it had passed, the mayor could've ignored the request. If it were worded differently to present it as a policy decision, the mayor could've also vetoed the measure, with no chance of the veto being over-ridden -- unless it was a full-scale revolt against the chief executive, which it was not.

Sparse media reporting on the test kits issue did not immediately tell the public what was going on, why the City Council would now seek to stop the flow of funds that it had earlier decided to appropriate.

Had the BOPK decided not to cooperate with Mayor Edgardo Labella's anti-Covid campaign, or perhaps even use it as another assault by party leader former mayor Tomas Osmena?

No. Obviously though, the minority wanted to help in the shaping of policy, if not its implementation, on moves to contain and repel the pandemic. Like Vice Mayor Rama, the BOPK councilors must think the City Council was being shut out.

Councilor Alvin M. Dizon told SunStar Thursday, May 21, the City Council "was not properly consulted about the PBB." He said the councilors, including the minority, believe that PBB "has a noble purpose and we are eager to support the project" but they believe it "should remain scientific for it to work." The minority had not blocked the appropriation for the anti-Covid fund.

The struck-down resolution cites as argument that the rapid diagnostic tests (RDT) in the PBB project would not be right because the test was not the "gold standard" in testing and could be unreliable:

[1] A Department of Health circular (#2020-0160, March 31, 2020) says rapid anti-body-based test kits "cannot be used for mass testing due to its difficulties in interpretation and the high risk of misinterpretation";

[3] The Health Technology Assessment Council (HTAC) "does not recommend the use of such technology. particularly for mass testing."

What does DOH, through its regional office, officially think of Project Balik Buhay?

In a statement, sent May 17 to SunStar by Jonji V. Gonzales of the Office of the Presidential Assistant for the Visayas, Dr. Jaime Bernadas, regional health director, said that after analysis of the results of the mass testing, the city mayors "will decide on the next step towards a scientific, evidence-based and data driven recommendation by our local experts..."

Gonzales also extolled the "value of prevalence survey using rapid antibody test kit and validated by RT-PCR (reverse transcription polymerase chain reaction) test," which is considered "the gold standard in testing." He cited these advantages: using the results for city officials and DOH to decide "where to pre-position logistics in case of an outbreak," to react or do preemptive strike against the virus, and to "predict where possible surge in positive Covid-19 cases will occur."

Bernadas, steering clear of the potential controversy, didn't take up the issue raised by the councilors regarding DOH advice against rapid tests. Gonzales pushed for the rapid tests, which he said will be validated by PCR test.

It is clear enough that the dispute is on the method used, not the mass testing, and their role in the Covid-19 campaign. The councilors want to take part in the action, which Mayor Labella may not grant. The mayor had declined an earlier invitation to appear before the City Council, reportedly saying he was "busy." And the councilors most likely won't get to know the results of the mass testing.

Minority leader Nestor Archival told SunStar Thursday, May 21, that since the City Council has not been shown the test results, he would suggest "a more targeted approach: test those who have been moving around the city during quarantine and (people in) the sitios with most incidents." He mentioned "frontliners, barangay workers, police, delivery personnel and essential workers who have been working through ECQ."

Archival said he "would be glad" that data from DOH 7 and Vicente Sotto on number of people tested and found positive would be publicized daily. "The flow seems to have stopped. The people need to be informed."

Not in war room

If it's any comfort, not just the minority BOPK councilors are not in Cebu City's war room on the coronavirus emergency. Most of the majority Partido Barug councilors are shut out too. Even the vice mayor complained.

They may also be comforted that the review and oversight over public funds, which the City Council sought to do, can still be done once the "war" is over.