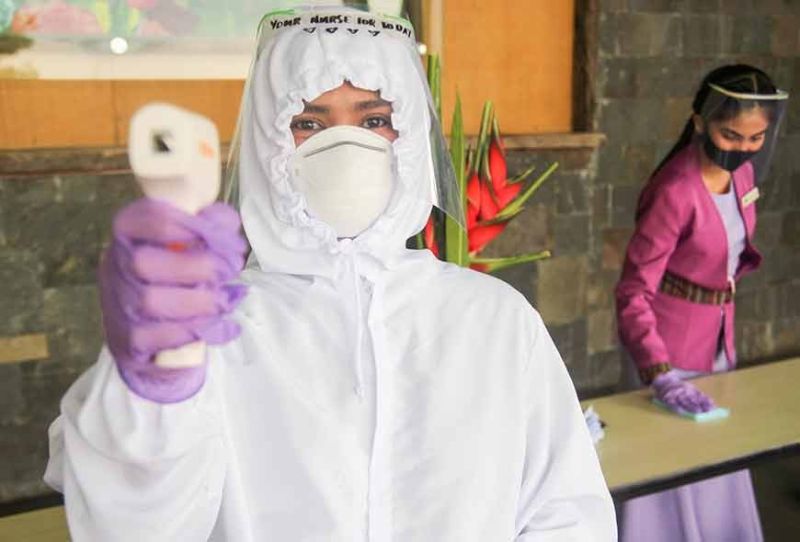 ADAPTING. A nurse from Baguio Country Club greets visitors with a temperature check as part of the establishment’s health protocols during the “new normal.” Country Club checked all health protocols while successfully hosting a special meeting on Covid-19 on Thursday, proving that the hospitality industry can adapt to the changes. Photo by Jean Nicole Cortes

Galvez, in his visit to the city on Thursday, May 21, stressed the government’s plan is guided by the pronouncement of President Rodrigo Duterte to safe guard the health and wellbeing of the people, particularly the frontlines against the dreaded virus.

“The President is enjoining everyone to participate in this war and follow the guidelines set by the national government and local officials. He emphasizes the key role of local government officials in leading the battle to the front to which the National Government cannot do it alone and recognizes the help of the LGU and the people to which role of the LGU and people’s participation is very important,” Galvez said.

He pointed out the best defense to combat Covid-19 is prevention which is also considered as the best weapon against the virus.

“Even without testing, what are needed here are quarantine, social distancing, and hygiene which is very important. Comparing with other countries, their transmission production was low because people’s participation and discipline is very important. For Baguio City and the Cordillera Region, what we see is the people here are very disciplined unlike those from Manila which is the epicenter of the virus because it is hard to implement discipline to them,” the Secretary added.

Almost 200,000 individuals have been reported to have violated the guidelines on enhanced community quarantine (ECQ) in Metro Manila.

“Detection, testing and tracing which is being done in Baguio City is very important. The first two stages are our foundation and if these are strengthened, isolation treatment and reintegration follows easily, early detection will have early treatment to avoid complications,” Galvez pointed out.

Among the recommendations is for the Cordillera to look for alternative way of doing business.

“I believe that with the capacity that we have right now like Baguio City as a model of tracing capability, I would like to thank the CAR for being one of our model for being the most if not one of the over prepared region in combating the coronavirus which will deserve the needs for them to prepare for other complex challenges in the future, the best in us is in the Cordillera Region,” Galvez added.