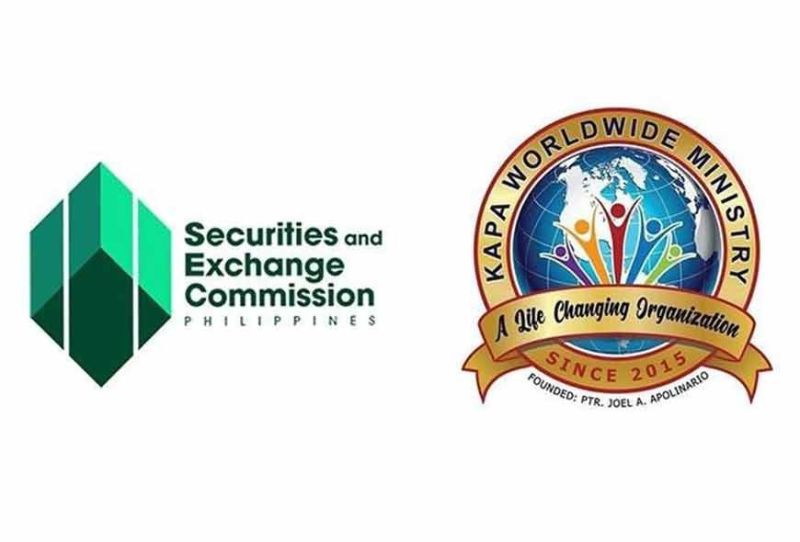 THE Securities and Exchange Commission (SEC) belied reports circulating online that the fraud charges against Kapa-Community Ministry International (Kapa) have been dismissed while cautioning the public against being preyed upon by false information perpetrated by the group.

In a statement issued by SEC on Friday, May 22, the national government regulatory agency denied the supposed dismissal of the cases against Kapa contrary to the information that originated during an interview posted on May 7 on the YouTube channel of Bong Cagape and shared by other channels such as Kapa Updates and Nino Malunhao.

The commission said the criminal cases filed against Kapa for violations of Republic Act No. 8799 or The Securities Regulation Code were not dismissed but rather currently pending in various courts.

“The Commission clarified that the cease and desist order against Kapa became permanent in March 2019 and, as such, remains in full force and effect. It added that the certificate of incorporation of Kapa was subsequently revoked in April 2019.”

The statement further read, “The SEC has called out the deliberate misinformation and disinformation propagated by promoters and supporters of Kapa before.”

Kapa Founder and president Joel A. Apolinario, along with the group’s other officers were only able to secure conditional and temporary liberty after posting bail. Kapa has been under fire in 2019 after SEC discovered that they are involved in Ponzi scheme, an investment program that offers impossibly high returns and pays investors using the money contributed by later investors.

It can be recalled that the prosecutors at the Department of Justice (DOJ) charged Kapa founder Apolinario, together with Kapa trustee Margie A. Danao and corporate secretary Reyna L. Apolinario, before the Bislig City Regional Trial Court Branch 29 for violating Sections 8(8.1), 26.1 and 28 of the Securities Regulation Code.

On February 19 and 27, Apolinario and Catubigan both surrendered and posted bail for their temporary liberty while facing the investment fraud charges filed by the DOJ after the complaint filed by the SEC on June 18, 2019.

Aside from the fraud charges initiated by the SEC, Apolinario faces charges for the non-bailable offense of syndicated estafa before the Cagayan de Oro City Regional Trial Court Branch 21.

“Amid the rampant misinformation and disinformation, the SEC reiterated its advice for the public to exercise caution when presented with reports about Kapa to avoid falling into the trap of what could be one of the country’s most notorious scammers,” SEC said.