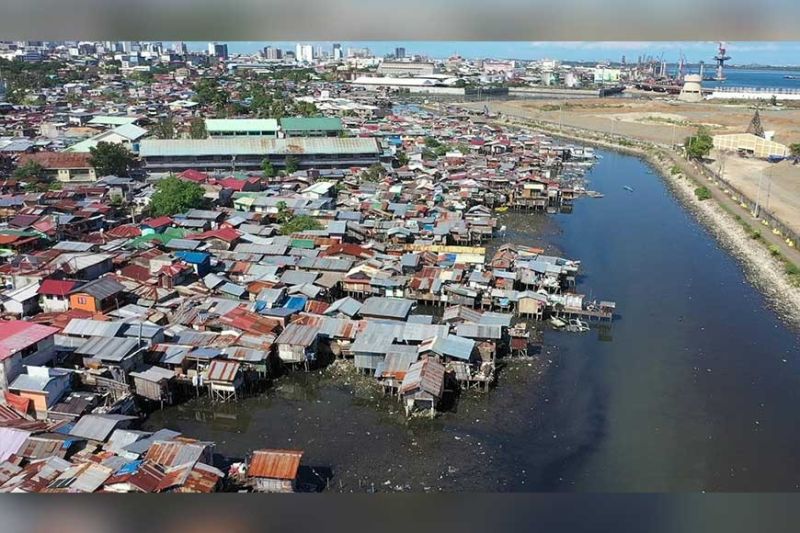 TOPPING THE LIST. Houses stand shoulder to shoulder near murky water in Sitio Alaska, Barangay Mambaling, Cebu City. Of the 38 villages in the city with Covid-19 cases, Mambaling ranked first with 619 cases as of May 22, 2020, its situation not helped by asymptomatic residents positive for the coronavirus disease refusing to go to the barangay isolation center. (SunStar Photo / Allan Cuizon) 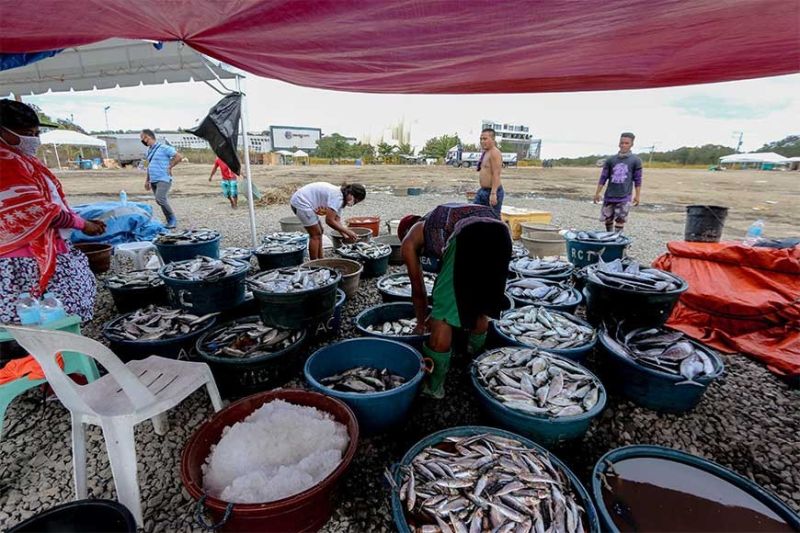 MOVING MARKET. After the Pasil Fish Port was closed indefinitely on May 3, 2020 to prevent the further spread of Covid-19 cases in the area, the Cebu City Government transferred the vendors to the South Road Properties behind the San Pedro Calungsod Chapel where the wide expanse allows for more social distancing. (SunStar Photo / Alex Badayos)

ON JUNE 1, will Cebu City’s twice extended state of enhanced community quarantine (ECQ) finally be lifted? Or will it be extended yet again?

The answer will either relieve or cause shivers down the spine of the city’s neighbors on the island-province of Cebu because as of May 22, Cebu City accounted for 1,854, or 83 percent, of the province’s 2,233 cases.

And despite Cebu Gov. Gwendolyn Garcia’s isolating Cebu City from March 30, 2020 by disallowing entry, except for essential personnel, into the territorial jurisdiction of the Province of Cebu as she defined as the borders of Mandaue City in the north, Talisay City in the south, the Municipality of Balamban in the west, and the Municipality of Cordova on Mactan Island in the east—the novel coronavirus has managed to turn up in her territorial jurisdiction, with local officials baring links of the cases with Cebu City.

With cases in Cebu City still climbing eight weeks after it was first placed under ECQ on March 28, perhaps even other provinces should watch their back.

Here’s a list of cases in Cebu and Bohol provinces that have links to Cebu City.

A day before Cebu City’s month-long ECQ was originally set to expire, Carcar City got its lone Covid-19 case: a 17-year-old boy with kidney disease from the remote and sparsely populated Sitio Tumpag in Barangay Guadalupe, who had been brought to the Vicente Sotto Memorial Medical Center (VSMMC) in Cebu City due to kidney complications on April 23. He was swabbed for Covid-19 on arrival, but died there on April 25. He had been undergoing monthly Cyclophosphamide Chemotherapy.

The hospital slammed insinuations by a Carcar official that the boy could only have acquired Covid-19 during admission at the VSMMC, which treats many Covid-19 patients.

Four of Minglanilla’s cases have links to Cebu City. The town recorded its first patient on April 29, a female nurse from Lower Pakigne working in a Cebu City hospital.

On April 30, its second case was a 15-year-old boy who may have gotten infected when his brother-in-law visited his family from April 8 to 20. The brother-in-law, who owns a store in Liloan town (which had no Covid-19 cases), delivered oxygen tanks to Cebu City hospitals.

On May 1, the town reported its third case: a female doctor from Barangay Linao, who worked in a Cebu City hospital. She had not gone home to Minglanilla in two months.

On May 13, the town reported its fifth case: a female resident of Barangay Calajo-an working as a nurse in a public hospital in Cebu City.

A 58-year-old man from Sitio Birhen sa Enar, Barangay Lanao died on the way to a Cebu City hospital on April 25. He had been going to Cebu City regularly for kidney dialysis treatments, the latest of which was on April 22. He is the town’s only Covid-19 case.

Officials said Mandaue City’s Patient 19, a two-year-old from Barangay Cabancalan, fell ill after he was exposed to a relative living in Barangay Luz, Cebu City. The Covid-19 cases in Barangay Luz breached 100 on April 17 and hit 186 on April 30.

Among these are Talisay’s Patient 2, recorded on May 1, who tested positive for the virus after she visited Barangay Inayawan in Cebu City on April 18 and met people who, on April 21 and 22, were found to have Covid-19; Patient 3, recorded on May 4, a Barangay Dumlog resident working as a health worker in Cebu City whose last visit to Talisay was on April 15; and Patient 5, recorded on May 8, a female from Barangay Cansojong whose family sold fish in Barangay Pasil, Cebu City.

Patient 7, reported on May 11, was a resident of Barangay Pasil in Cebu City who had only begun renting a place in Barangay Tabunok, Talisay in March. She was picked up by a Barangay Suba, Cebu City ambulance for admission at the VSMMC in Cebu City on May 9 to give birth. She stopped by Pasil and Suba before going to the hospital. As part of the hospital’s standard procedure, she was swabbed on May 10. As of May 8, Pasil and Suba combined had more than 130 Covid-19 cases.

On May 12, Gullas said Patient 8, a 60-year-old from Barangay Poblacion, had been living on F. Ramos St. in Cebu City where she also had a house and sold items. She returned to Talisay only on May 5 to 9, where she isolated herself in the rooftop of her house until her hospital admission. She crossed the Talisay border on May 5 by hitching a ride with her son, whose wife had just given birth. Showing the release papers of the daughter-in-law from the hospital enabled them to get through the checkpoint.

On May 13, Gullas said Patient 9 was a 38-year-old female from Barangay San Isidro working as a health worker at the Visayas Community Medical Center in Cebu City.

Cebu’s northernmost town reported its lone case, a woman from Barangay Pili, who had no travel history outside Madridejos. On May 3, she was admitted at the Madridejos Birthing Home, then referred to the Bantayan District Hospital due to prolonged labor. On May 4, she was moved to the Visayan Community Hospital in Cebu City, and 30 minutes after, to the VSMMC for a caesarian operation. It was there where a swab test was conducted.

Liloan town reported its lone Covid-19 case, a female from Purok Proper 2, Barangay San Vicente who gave birth at the VSMMC in Cebu City on May 15. She and her husband maintained a store in the Ramos Public Market in Cebu City. She went to Cebu City at least thrice in May, getting past border checkpoints through her medical certificate indicating her pregnancy. She went to Cebu City on May 8 to fill out a Social Amelioration Program (SAP) form, on May 9 to claim the SAP aid, and on May 12, to visit Perpetual Succour Hospital for a checkup where she underwent a swab test for Covid-19 on May 13 as part of hospital standard procedure. Her husband and baby tested negative for the virus.

The Department of Health (DOH) 7 said Covid-19 had struck 10 health workers in Central Visayas, including two medical technologists and a doctor from the Governor Celestino Gallares Memorial Hospital in Tagbilaran City, Bohol who had been sent to train in Cebu City. The medical technologists arrived in Cebu from Bohol on May 11; the doctor arrived in Cebu from Dumaguete City, Negros Oriental on May 10.

Bohol’s only positive case before the three, was a Chinese tourist who, after recovering from the disease, returned to China on Jan. 31. As for Negros Oriental, it had last reported a confirmed case on April 10, when its case count reached four.

A 44-year-old male from Badian, working as a security guard in Mandaue City, but residing in Alaska, Mambaling, Cebu City, is the town’s first Covid-19 case. On May 5, on finding his boarding house in Mambaling locked, he headed for Badian. On arrival on May 6, he was placed under quarantine at the Barangay Isolation Unit for 14 days. He was swabbed on May 8.

On April 29, DOH 7 Director Jaime Bernadas addressed suspicions on Covid-19 infections linked to hospitals, saying: “As the province of Cebu records new cases, there are questions if the infection was obtained in the community or in the hospital where they were admitted. The answer to this question will never be a clear-cut answer. Contact tracing activities cannot answer who got the infection first, since the test results of close contacts would only tell us who among them got infected and had to be isolated immediately to limit transmission.”

He advised everyone to consider himself a potential carrier of the virus and “not to be too complacent just because we may have no diagnosed cases in our own communities.”

He gave this stark warning: “The infection and the virus itself could be hiding in our midst, undiagnosed, undetected.”

On May 22, Cebu City, with its 1,854 cases (116 recoveries, 19 deaths), ranked second only to Quezon City, which reported 1,974 cases (614 recoveries, 166 deaths), in number of Covid-19 cases in the Philippines. It’s an unenviable position that, coupled with its active cases, must be considered by anyone eyeing a quick reopening.