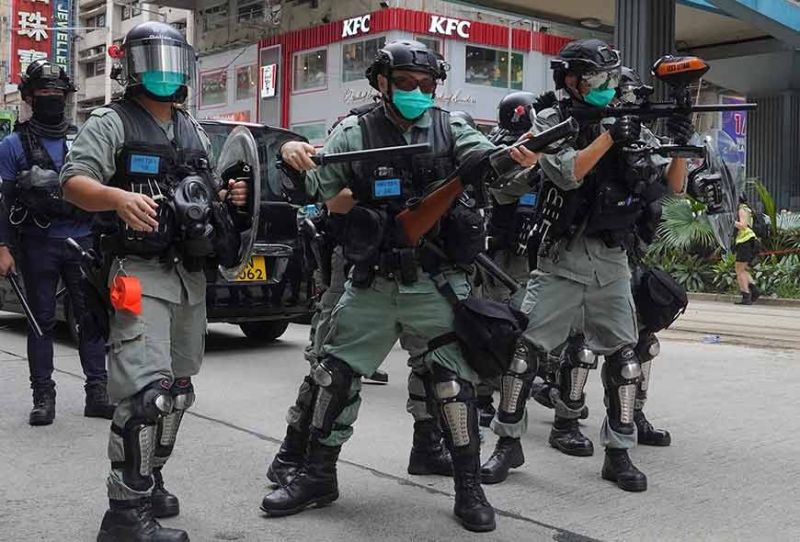 HONG KONG. Hong Kong riot police fire tear gas as hundreds of protesters march along a downtown street during a pro-democracy protest against Beijing's national security legislation in Hong Kong, Sunday, May 24, 2020. Hong Kong's pro-democracy camp has sharply criticised China's move to enact national security legislation in the semi-autonomous territory. They say it goes against the "one country, two systems" framework that promises the city freedoms not found on the mainland. (AP)

HONG KONG — Hong Kong police fired volleys of tear gas in a popular shopping district as hundreds took to the streets Sunday, May 24, to march against China's proposed tough national security legislation for the city.

Pro-democracy supporters in Hong Kong have sharply criticized China's proposal to enact a national security law that would ban secessionist and subversive activity, as well as foreign interference and terrorism in the semi-autonomous territory. Critics say it goes against the "one country, two systems" framework that promises the city freedoms not found on the mainland.

Prominent activitist Tam Tak-chi was arrested during the protests for what police said was an unauthorized assembly. Tam said he was giving a "health talk" and was exempt from social-distancing measures that prohibit gatherings of more than eight people.

The protests come two days after the proposed bill was submitted on Friday, the opening day of China's national legislative session. Sunday's rallies are a continuation of a monthslong pro-democracy movement that began last year and has at times descended into violence between police and protesters.

The new law, expected to be passed on May 28, would bypass the city's legislature and allow the Hong Kong government to set up mainland agencies in the city, sparking fears that this would allow Chinese agents to arbitrarily arrest people for activities deemed to be pro-democracy. (AP)