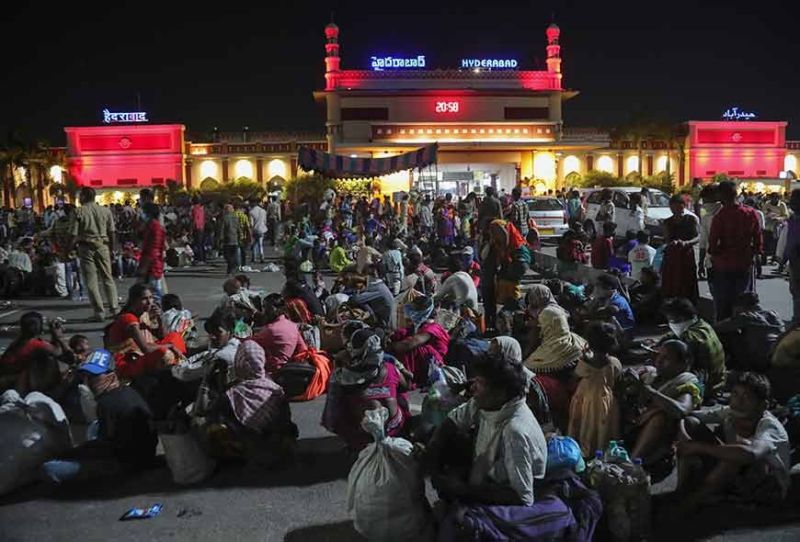 INDIA. Migrant workers line up to board trains to their home states, at Hyderabad Railway Station in Hyderabad, India, Saturday, May 23, 2020. India's lockdown was imposed on March 25 and has been extended several times. On May 4, India eased lockdown rules and allowed migrant workers to travel back to their homes, a decision that has resulted in millions of people being on the move for the last two weeks. (AP)

Federal Health Minister Greg Hunt said the COVIDSafe app is playing a strong role in Australia's response to the pandemic and several countries have expressed interest in learning from its positive impacts.

If a user is diagnosed, the app works to identify other users who have been in close proximity for 15 minutes or more in the previous three weeks.

The government has said at least 40 percent of Australia's 26 million people need to use the app for it to be effective. There are approximately 17 million mobile phones in Australia.

The government and states have been easing restrictions on travel and increased use of restaurants and bars in the past few weeks. Australia has recorded more than 7,100 cases of Covid-19, with 102 deaths.

In other developments in the Asia-Pacific region:

— 3 NEW CASES IN CHINA: China on Sunday reported three new confirmed cases of the coronavirus, two from outside the country and one locally transmitted in the northeastern province of Jilin that has experienced a minor outbreak now apparently largely contained. No new deaths were reported and 79 people remain in treatment, with another 380 under isolation and monitoring for being suspected cases or having tested positive for Covid-19 without showing any symptoms. China has reported a total of 4,634 Covid-19 deaths out of 82,974 cases.

— SOUTH KOREA RECORDS 25 NEW INFECTIONS: South Korea reported 25 additional cases of the coronavirus over a 24-hour period, amid a continuation of small-scale outbreaks in the country. The Korea Centers for Disease Control and Prevention said the additional figures released Sunday took the country's total to 11,190 with 266 deaths. The agency said 10,213 of them have recovered and been released from quarantine. Seventeen of the 25 new patients were locally infected while the other eight came from overseas. South Korea eased much of its strict social distancing rules in early May before it saw a sudden uptick in the number of cases associated with nightclubs in Seoul's Itaewon entertainment district. Health authorities have confirmed a total of 225 cases linked to Itaewon cubs as of noon Sunday. (AP)