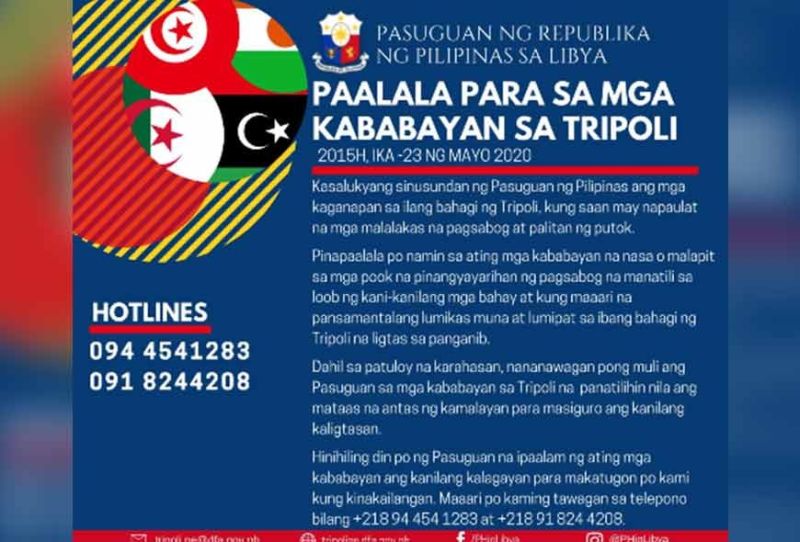 A 60-YEAR-OLD Filipina nurse was wounded by an artillery fire in the outskirts of Tripoli, the Libyan capital on late Saturday afternoon, May 23.

The Embassy said the nurse sustained a shrapnel wound in the shoulder after an artillery round exploded outside the housing compound where she and several other Filipino hospital workers were staying.

The nurse is the third Filipino casualty since the outbreak of armed conflict in Tripoli more than a year ago, Embassy Chargè d’Affaires Elmer G. Cato said.

Two other Filipinos had been wounded in rocket attacks in other parts of Tripoli during the early months of the fighting.

The Philippine Embassy in Tripoli has reminded members of the Filipino community to remain vigilant and to take the necessary precautions after the incident.

Overseas Filipino workers living in areas of conflict are advised to relocate whenever possible, to avoid crossfires.

"Filipinos in areas where exchanges of artillery or heavy weapons or small arms fire are taking place to relocate when able to avoid getting caught in the crossfire," the Embassy said.

The Embassy reported several hospitals in Tripoli have been struck by artillery shells. It had raised concern over the possibility that Filipinos, who are mostly hospital workers, may end up as collateral damage.

The Department of Foreign Affairs said there are still more than 1,000 Filipinos in Tripoli and surrounding areas. (NJN/SunStar Philippines)