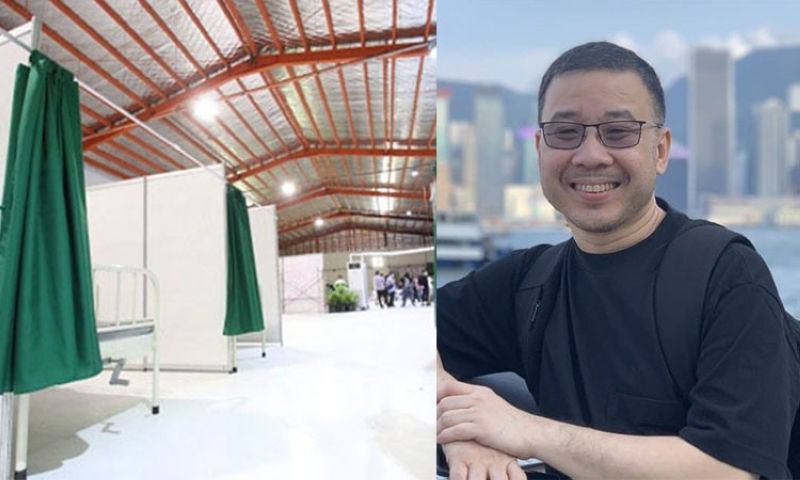 CEBU. Quarantine facility at the North Reclamation Area in Cebu City (left) and Jonji Y. Gonzales of the Office of the Presidential Assistant for the Visayas. (Photos from Facebook accounts of Edgar Labella and Jonji Gonzales)

[1] GOVERNOR GWEN-CHR DISAGREEMENT on whether the Cebu Province chief executive violated human rights of the Facebook user who used coarse and allegedly defamatory language against the public official.

"How about the rights of public officials?" answered the governor to the spokesperson of the Commission on Human Rights (CHR). Gwen, said one radio broadcaster, sounded like the police and others who are "victimized" by NPAs but get no sympathy from CHR.

[2] REFUSAL OF GUARD TO HAVE PHOTOS OF NRA QUARANTINE FACILITY taken by a news photographer. The purported reason: no permission from the city mayor. The mayor himself or an aide of the mayor?

Allegation of 'waste of money'

Jonji Y. Gonzales of the Office of the Presidential Assistant for the Visayas, which has been leading the initiative of the three cities (Cebu, Mandaue and Lapu-Lapu) in rapid mass testing, saying his lament is addressed to critics, some Cebuanos who love ("gusto lang jud") to find fault in government leaders, doctors, health workers and other frontliners in the fight against Covid-19.

What apparently infuriates Jonji, assistant to OPAV Michael Dino, is the criticism that the North Reclamation Area quarantine facility, for which the City Government reportedly spent P50 million on top of donations from the private sector, has not been used and therefore "a waste of money."

Offhand, the reasoning can't stand. Quarantine and isolation centers in an epidemic are built in anticipation, even fear of, the hospitals and other health facilities being over-crowded with patients. Remember the repetitive and early advice "to flatten the curve"? The purpose was also to buy time for the health system to be ready for the feared tidal wave of sick people. And just because the facilities are not used yet or might not be used at all does not make them unnecessary or wasteful.

But check out the points in Gonzales's lament, which he said he wants to "get off his chest" and reach the critics:

[1] The expected deluge of patients didn't come or has not yet come (this thing "ain't over till it's over") because, he said, 80 percent of the positive cases are asymptomatic. Which also explains, he said, why the Bayanihan Center, at the old Sacred Heart School gym, has only 28 beds filled as of now.

[2] Why build with more than the actual capacity? The actual capacity is not known until the disease will have struck and left. At best, the estimates are based on projections - and, in this kind of emergency, fear.

Fear of deluge of patients

But most everyone here was afraid that the health care system would collapse as it almost did in Metro Manila, when admissions to hospitals "passed the threshold of 70 percent" and could no longer accommodate severe Covid-19 cases. Here, Gonzales said, occupancy fluctuated between 40 and 60 percent.

The tri-city alliance, he said, also agreed to build BICs or barangay isolation centers in their respective cities where those showing no symptoms of Covid-19 are fed with health food and supplied with vitamins and monitored. That's one reason many of them don't develop mild or moderate symptoms to quality occupancy at the quarantine facilities. And the death rate, despite the big number of cases, is low, he said, "in Cebu it's less than one percent."

Mantra of being ready

[3] Gonzales said it is important to exceed in supply and other logistics, rather than lack such facilities as BICs, quarantine facilities, and RDT and RT-PCR test kits.

Councilor Dave Tumulak was quoted in a May 25 Freeman story that he hoped the NRA facility would be used already as there are many Covid-19 patients in hospitals who are confined there ("natanggong") and might be accommodated at the city-built quarantine center. But would they qualify under the OPAV plan?

Minority Leader Councilor Nestor Archival said machines needed to make the anteroom functional are not available yet. It is designed as a negative-pressure building, so it needs a special kind of equipment.

The dispute may not be about the wisdom of building the facility but on the delay of its use, on the alleged failure to meet targets -- completion of the structure and installation of needed equipment -- which were announced to the public.