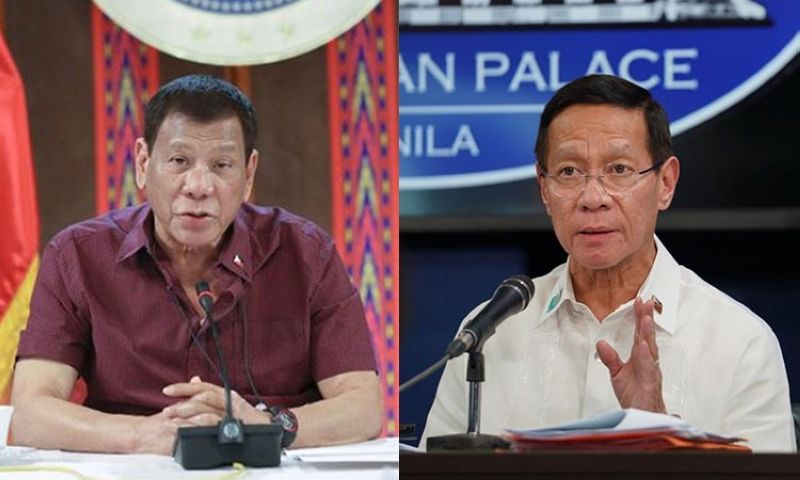 Rather, the President on Monday night, May 25, advised Duque not to be “touchy” about the various allegations thrown at him and stand for what he believes in.

“Alam mo, huwag ka masyadong touchy sa mga issues, because always there will be pros and cons. Pakinggan na lang natin because this is a democracy,” Duterte said during his regular briefing with some Cabinet members late Monday night, May 25.

The President, who said his only main concern is whether graft and corruption was committed in the procurement of personal protective equipment (PPE), said that he understands Duque’s situation.

“Alam ko ikaw, you are hard-pressed, I know your situation. You just tell us if that is the one that’s in your gray matter between your ears. Sabihin mo, kung ayaw ninyo maniwala, bahala kayo, basta ito yung akin,” Duterte said.

“Maybe you should adopt that kind of attitude. So be it. If I committed a wrong, as long as there is no malice there,” he added.

The Health chief has been criticized for announcing that the country is already on a second wave of the coronavirus disease 2019 (Covid-19) epidemic.

Duque had qualified his statement and said the country is on its “first major wave” of infections.

On Monday, Duque repeated this and said he based his statement on the analysis of epidemiologist John Wong who considered the first three cases of Covid-19 in the country as the first wave.

The first three cases involved Chinese tourists. One of them died, becoming the first mortality outside China.

But Duterte took responsibility for the procurement, saying he had given an order to Duque to do what needs to be done and expedite the process regardless of the cost.

In a letter addressed to Duterte on May 25, the Private Hospitals Association of the Philippines, Inc. (PHAPi) said Duque must be replaced as he seemed too “exhausted” to address the health concerns of the country.

“We have high regards for him, but he seems to be already so exhausted that there is a need for a fresh blood and a fresh mind to lead the Department of Health and the PhilHealth,” it added.

In April, at least 14 senators signed a resolution seeking to remove Duque from his post for his “failure of leadership, negligence, lack of foresight, and inefficiency.”

Duterte has rejected the senators’ call saying that he has made a decision for Duque to “stay put.” (SunStar Philippines)