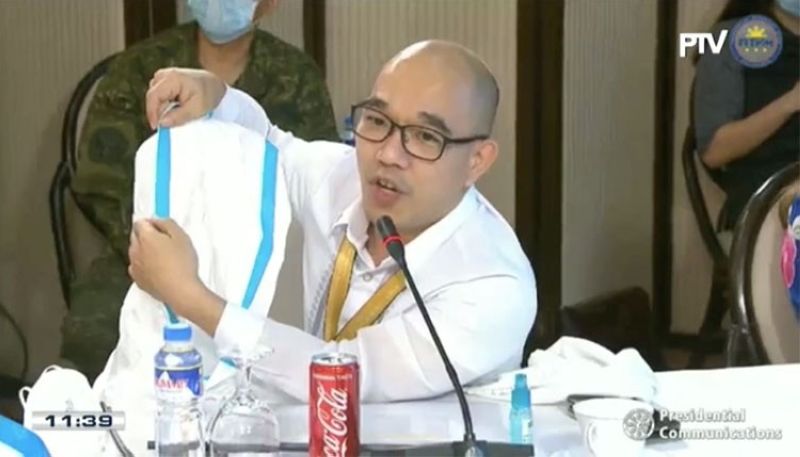 MANILA. Undersecretary Lloyd Lao, officer-in-charge of the Procurement Service of the Department of Budget and Management, shows the blue strip on a coverall to justify the purchase of expensive coverall suits that meet international standards during a meeting with President Rodrigo Duterte on May 25, 2020. (Screenshot from PTV video)

PRESIDENT Rodrigo Duterte on Monday night, May 25, took full responsibility for the procurement of personal protective equipment (PPE) while inquiring about the purchase of allegedly overpriced medical equipment.

On the PPE sets, Duterte said he gave the order to Department of Health (DOH) Secretary Francisco Duque III, who has been under fire for the procurement of allegedly overpriced PPE sets, to expedite the procurement and do “what needs to be done.”

The President recalled that in the early days of the government’s battle with the coronavirus disease (Covid-19), he told the DOH secretary to procure the necessary equipment regardless of the cost.

“I would listen to Sec. Duque, but I gave him the instruction and I admit it in public now. Sabi ko sa kanya, ‘do everything you can.’ Sabi niya there's so many proposals. ‘I do not care, if it's not cheap, if it is expensive, just go ahead and do something about it. Kasi ipit na tayo dito',” Duterte recalled saying.

(I told him, do everything you can. He said there were so many proposals. I told him that I don’t care if it’s expensive. Just go ahead and do something about it. We’re in dire straits here.)

Undersecretary Lloyd Christopher Lao, officer-in-charge of the Procurement Service (PS) of the Department of Budget and Management, brought in a mannequin garbed in a full PPE set as used by healthcare workers battling Covid-19.

The PS-DBM earlier said it procured one million PPE sets for P1.8 billion, or one PPE set for P1,800.

The coverall, the most expensive part of the PPE, comes with a blue strip, one of the marks of a very expensive coverall which meets international standards. One imported coverall costs P1,100.

“This is, what we call as, Ebola-level. Ang Ebola-level, it can actually stop even air transmissible viruses. Ano s’ya, it’s lightweight, and it’s non-woven, may heat-sealed, even the sewn portion is covered to make sure na pag nagkaroon tayo ng spill -- air or liquid -- hindi papasok sa balat or sa clothing ng mga doctors,” Lao said, as he held a coverall.

“When you go international, lahat sila ito ang sinusuot. There’s only one country that is not wearing this, it’s Korea. Korea has the same item, but not heat-sealed,” Lao added.

It is for this reason that the PS does not procure coveralls from any supplier in South Korea. A non-heat-sealed coverall is P200 to P300 cheaper than the heat-sealed item.

Lao said Senator Panfilo Lacson, who earlier asked the DOH to explain the alleged “overpriced” PPE at P1,097, was referring to the imported heat-sealed coverall.

Lao said, however, that beginning June, the PS-DBM will be procuring locally produced heat-sealed coveralls for P850 each from the Confederation of Wearables Exporters of the Philippines (Conwep). These local coveralls will be made of materials imported from China.

He said other locally made coveralls are not medical grade because they are made of fabric, which is not fully protective because liquid might seep through.

“It (local coverall made of fabric) makes you feel secure, but it’s not actually medically safe for you to wear,” Lao added.

Duterte, in response, said the PS-DBM did right in purchasing the heat-sealed coveralls.

“Do not buy that kind of coverall suit that would place the health workers (at risk), even if there is just an iota of chance na... eh, buhay ‘yan,” Duterte said.

(Is that what you purchased? You did right. There’s no problem.)

Lao said the procurement was based on the specifications provided by the DOH and the Food and Drug Administration (FDA).

The goggles that the PS-DBM secured has anti-fog and indirect ventilation features to allow air to enter so that the wearer does not perspire.

While the coverall provides medical grade protection, the surgical or lab gown is isolation level.

The gloves are powder-free, textured, and either latex or nitrile, which are superior in terms of puncture resistance.

Lao also said all the items in the PPE set procured by the government, including the head and shoe covers, do not promote growth of viruses and bacteria.

He said some suppliers offered to provide reusable items, but these were rejected by DOH.

Duterte agreed, saying, “Do not ever do that (buy reusable items). You just throw it away. If you place a person in jeopardy...itapon mo na ‘yan. That’s the reason why we’re spending money. We can always sell everything that we have.”

Duque, for his part, relayed the feedback from UP Philippine General Hospital Director Gerardo “Gap” Legaspi.

“They are very very satisfied with the quality and level of protection that these PPEs provide their doctors. Kaya yung infection rate po nila, bumaba, Mr. President,” Duque said.

Duterte noted that confirmed cases of coronavirus infection are still going up although mortalities have slowed down and recoveries are continuing to increase.

On the purchase of medical equipment, Lao said the DBM received a letter from Omnibus Bio-Medical Systems Inc. offering an automated extraction machine for P4 million.

An email from Omnibus also offered the same machine for P4.35 million, which Lacson claimed to cost only P1.75 million if purchased directly from Chinese manufacturer Sansure Biotech Inc.

Lao said the same item was offered by Guidance Management Corporation for P5.274 million and by Fil-anaserve Inc. for P7.74 million.

These companies distribute Sansure products, but a company based in Hong Kong that also distributes Sansure equipment won the bidding.

Lao said, however, that visiting Sansure executives, with whom he met at the DBM office over the weekend, were willing to sell directly to the Philippines instead of through Omnibus.

He said he told Sansure that PS-DBM no longer wants to deal with Omnibus, which is owned by a couple surnamed Co.

“I made a categorical statement that we are no longer willing to discuss with Sansure if they go through Omnibus because they (Omnibus) were given a chance before, when the government really needed it and they gave a really high price and threw the ball to us that ‘you can only deal with us because we are the exclusive distributor in the Philippines’,” Lao said.

Presidential Spokesperson Harry Roque said there is probably basis for the National Bureau of Investigation (NBI) to investigate the Co couple for profiteering and hoarding, citing an existing law against profiteering, defined as taking advantage in a national emergency, and a provision in the Bayanihan to Heal as One Act.

“From what we heard from Project ARK, this is very serious kasi the only source we can get these PCR machineries and kit is from Sansure now, and there was really almost an attempt to blackmail us into buying something very expensive,” he said.

Duterte said the NBI should study the matter carefully.

“(If) the NBI has probable cause, then go ahead. But I still believe in..what accruing to people in government working... the presumption of regularity in the performance of their duty,” the President added. (MVI/SunStar Philippines)